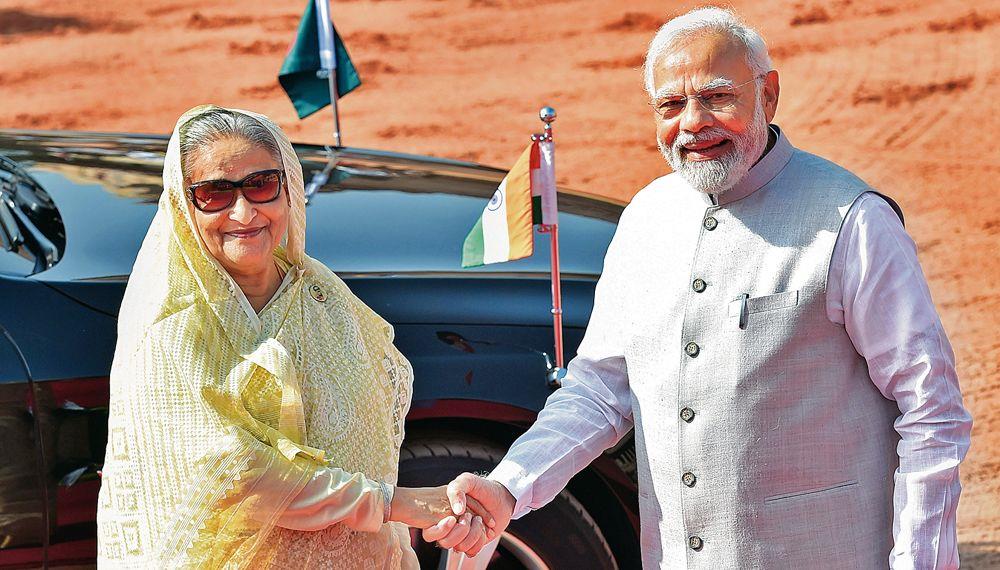 New path: Overemphasis on India’s contribution to the liberation of East Pakistan should be a historical memory, not the bedrock of ties. PTI

Bangladesh Prime Minister Sheikh Hasina’s visit to India last week was a case of history repeating itself. In order to put India-Bangladesh relations on firmer foundations for some potentially turbulent years ahead, New Delhi appears to have taken a leaf out of PV Narasimha Rao’s diplomatic notebook 30 years ago.

India-Bangladesh relations cannot realise their full potential as long as they are compartmentalised.

Shortly after Rao was sworn in as India’s unlikely PM in 1991, he told his aides that he wanted a break from the immediate past in dealings with Sri Lanka, which had then been vitiated by the disaster surrounding the IPKF sent to the island neighbour. Rao did not want the then PM Rajiv Gandhi to be a party to the India-Sri Lanka agreement of 1987. He favoured a direct agreement, instead, between Sinhala and Tamil Sri Lankans, but was overruled. After his finance minister Manmohan Singh’s reforms got under way, Rao called a meeting of leading businessmen and urged them to look at investing in Sri Lanka.

It was his belief that India-Sri Lanka relations, which had touched the lowest point at that time, could only be reversed by creating an economic stake for the small nation in India. Many of the entrepreneurs whom Rao met readily responded. The result was large-scale Indian investment in Sri Lanka in the next few years – in tea estates, food processing, petroleum, retail, real estate, hospitality, tourism, banking, etc. President Ranasinghe Premadasa, who had turned against India after the IPKF misadventure, became accommodative of New Delhi’s interests. Chandrika Kumaratunga, who succeeded Premadasa a year after his assassination, was enthusiastic about Rao’s outreach. India’s 2,500-year-old relationship was restored.

Industrialist Gautam Adani’s meeting with Sheikh Hasina in New Delhi last Monday has the potential to be of the same genre as Rao’s economic initiative on Sri Lanka. Until Rao’s nudge to corporate India for a large-scale business outreach towards Colombo, India-Sri Lanka ties were hostage to political considerations and subject to people-to-people, ethnic or sub-national sensitivities. Not anymore. Adani’s meeting with Hasina is said to have firmed up a date by year-end for supplying power to Bangladesh from his 1,600 MW Godda thermal plant in Jharkhand. As a fallout of the war in Ukraine, Bangladesh has shut down 10 diesel power plants to save escalating fuel costs, leading to electricity shortages. The offer of power from Jharkhand could not have come at a more providential time. According to reports, the Adani Group has offered to look at port development in Bangladesh. This is a critical area for Bangladesh, given its riverine and coastal geography. Hasina’s economic team is simultaneously exploring more corporate outreach in India.

India-Bangladesh relations cannot realise their full potential as long as they are compartmentalised. One such compartment is the India-Pakistan spectrum in the relationship leading up to the 1971 War and since. It is time to relegate that — and an overemphasis on India’s contribution to the liberation of East Pakistan – as a historical memory and not the bedrock of bilateral relations. Another compartment, more recent and unsavoury, has been the description of illegal migrants, implicitly Bangladeshis, as ‘termites’, with an ill-informed Union minister even saying that ‘half of Bangladesh will come to India if citizenship if offered’. The reality is that they would not. Hasina’s government handled such intemperateness with maturity. All these point to the same affliction that blighted New Delhi’s ties with Colombo, whose route, until recently, ran through Tamil Nadu. In the case of Bangladesh, the aforesaid compartmentalisations and other similar ones have been perpetuated for domestic political gains in India. Such zero-sum games can no longer be sustained, as the stalling of the National Register of Citizens in Assam – which primarily concerns Bangladeshis – has shown. The Citizenship Amendment Act of 2019 and the National Population Register have not fared much better.

All the same, when PM Modi claims that joint initiatives by him and Hasina have scripted a golden chapter in India-Bangladesh relations, he is not far off the mark. The reason for this is an unprecedented infusion of government-to-government inputs into the bilateral relationship, political distractions notwithstanding. Bangladesh’s several creditable achievements, which many Indians envy, have also helped. During the Covid-induced disruptions, it came as a surprise that growth rates in Dhaka were higher than those recorded by New Delhi. For at least 10 years, Bangladesh has been performing to its great credit in social development indices, especially in health and child welfare. Overall, it is ahead of India in human development.

A commitment to start negotiations ‘within the calendar year 2022’ on a bilateral Comprehensive Economic Partnership Agreement (CEPA) is one of the most forward-looking decisions at last week’s summit. The completion of a Joint Feasibility Study, which recommended CEPA negotiations, means both sides are serious about this initiative. The target date for a CEPA is 2026, when Bangladesh is expected to come out of the list of Least Developed Countries. A similar agreement with the UAE is off to a promising start and a recent Economic Cooperation and Trade Agreement is the forerunner of a CEPA with Australia.

A political resolve on India’s side to consign the ‘termites’ episode to the past is evident in a nuanced acknowledgement in the joint statement at the end of Hasina’s visit. ‘Noting with satisfaction that the number of deaths due to incidents along the border has significantly reduced, both sides agreed to work towards bringing the number down to zero.’ It means illegal migration from Bangladesh to India is down and Dhaka will not be New Delhi’s whipping boy. The statement acknowledged the strong steps to stem terrorist facilitation along the border and its by-products, such as ‘smuggling of arms, narcotics and fake currency’. This is a good augury.