The global economic implications of the situation are serious 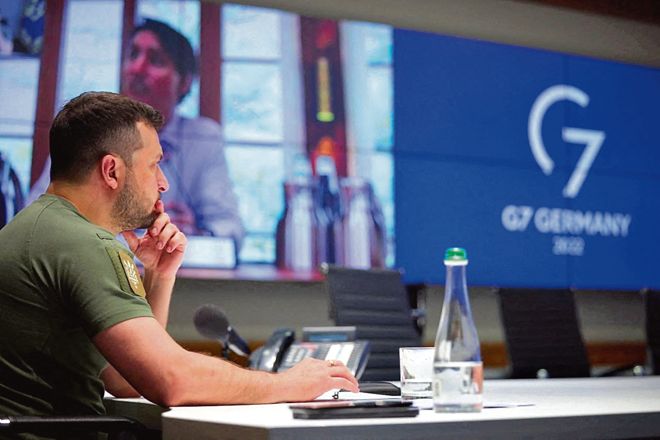 Rigid: The US, the UK and the Ukrainian President seem determined on ‘bleeding’ Russia. This was evident from what transpired at the recent G7 Summit. Reuters 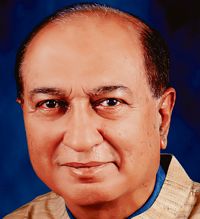 When the Soviet Union collapsed in 1991, there were fears of conflicts between the dominant Russian Federation and its neighbouring Islamic republics. That did not happen. The transfer of power in the Muslim-dominated eastern republics of Azerbaijan, Uzbekistan, Tajikistan, Kirghizia and Kazakhstan was smooth and peaceful. There were differences with other republics, particularly about the extent of Russian role in their national lives, but they have been manageable. The most serious differences that have arisen, have been primarily in Russia’s relations with its neighbouring, ethnically and religiously close republic of Ukraine, which was ruled by Russia for over two centuries. These differences were accentuated by the fact that Russia’s only maritime access to Crimea and the Black Sea has been through southern Ukraine. Moreover, both Crimea and southern Ukraine have large Russian populations.

Concerns about the continuing Russian-US rivalry are increasing, because of fears that Russian and Ukrainian wheat exports will be adversely affected.

There have been growing suspicions in Moscow over Ukraine’s rapidly expanding relations with Washington. These differences became serious when US Secretary of State Antony Blinken signed an agreement on November 1, 2021, with his Ukrainian counterpart. The agreement is virtually a defence treaty directed against Russia. Its provisions included ‘Standing up to Russian Aggression’, ‘Deepening Strategic Defence Cooperation’ and ‘Providing Ukraine with Security Assistance’. The US and Ukraine appeared determined to ignore Russia’s long-standing security concerns across its only major access to the Baltic Sea, which is through southern Ukraine. Tensions on this issue led to Russia annexing Crimea in 2014. Southern Ukraine, like Crimea, has a significant Russian population, which has backed the Russian takeover.

The Russian military intervention in Ukraine was initially directed at the capital Kyiv. It was the inevitable outcome of Moscow’s concerns at the growing military and political links between a hostile Biden administration and Volodymyr Zelenskyy, the young, politically inexperienced President of Ukraine. This intervention led to Russia’s neighbouring countries like Finland, seeking membership of NATO. While Russia’s move to take over areas in Ukraine’s southeast — from Donetsk to Mariupol and the Black Sea — was understandable strategically, the initial efforts by Russia to move westwards towards Kyiv were ill advised, politically, diplomatically and strategically. The western world predictably depicted the Russian action as a violation of Ukraine’s sovereignty.

Russia, however, soon changed course. Moscow has now captured areas like the entire Luhansk region, which it has historically used to guarantee its access to the Black Sea. Any political settlement now, would require guarantees by Ukraine and its allies for Moscow’s unhindered access to Crimea and the Black Sea. The West, led by the US, could get resolutions passed in international forums, which are critical of Russia. These are, however, seen as the actions of a US President seeking to raise his popularity ratings domestically. While sanctions may hurt Moscow, Russia has the capabilities to keep supply chains and international trade routes open. It has also overcome currency sanctions imposed by the US and its allies.

The events in Ukraine have led to a growingly polarised world order, pitting Russia, backed by China, against the US and its NATO allies. There have been adverse repercussions on the global economic environment for trade, investment and economic growth, because of economic sanctions imposed on Russia. Recent developments have led to fears of global food shortages and inflation. Many European countries that joined the US in imposing sanctions depend heavily on Russia for energy requirements. The US has its own sources of oil and shale gas. This situation has led to a sharp rise in oil prices.

Responding to the objections by some European countries to India’s continuing imports of oil from Russia, External Affairs Minister Jaishankar asked: ‘Is buying Russian gas not funding the war?’ He added: ‘Europe has to grow out of the mindset that Europe’s problems are the world’s problems, but the world’s problems are not Europe’s problems.’ India is the world’s third-biggest oil consumer. The rising oil prices have severely affected the lives of ordinary people in India, which has accepted an offer from Moscow of petroleum sales at discounted prices. Increased sourcing of oil, gas and fertilisers serves India well. Threats of trade sanctions against India by the US Congress have, however, just commenced.

Russia has now largely achieved its objective of taking control of its traditional access to the sea. It remains to be seen if Russia seeks to advance further westwards, toward the strategic port of Odesa, which is the most important port of Ukraine. The world would welcome an early ceasefire, given the desperate needs of countries across the world for wheat from Ukraine and Russia. India’s limited wheat surpluses will be available only for a few chosen countries. While there is recognition in countries like France and Germany on the need to restore peace, the US, Ukrainian President and the UK seem determined on ‘bleeding’ Russia. This was evident from what transpired at the recent G7 Summit.

Concerns about continuing Russian-US rivalry are increasing, because of fears that Russian and Ukrainian wheat exports will be adversely affected in countries across the shores of Africa, including Egypt, which is the largest importer of wheat in the region. Russia is the largest exporter of wheat in the world. Ukraine, which is ranked fifth internationally, earns about $3.5 billion annually from wheat exports. Both nations have a responsibility to ensure that their conflict does not affect international efforts to meet global requirements for wheat.