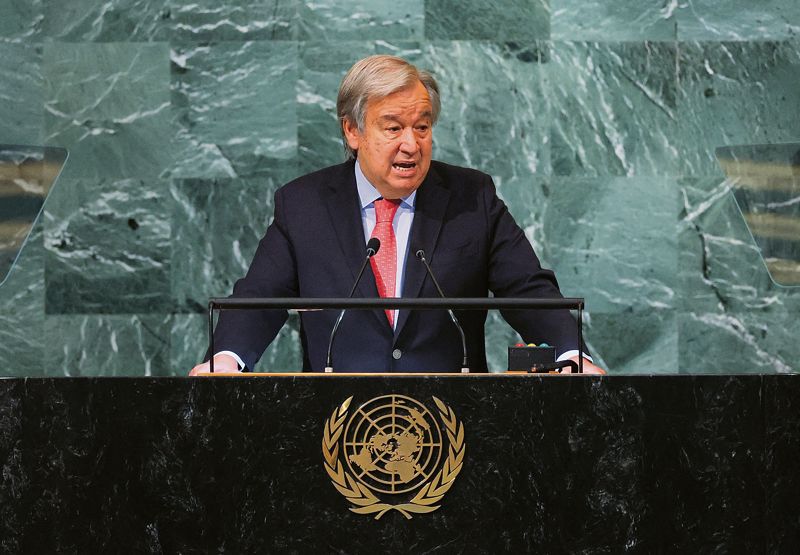 Straight talk: Guterres did not mince words when he said the global community was not ready or willing to tackle the ‘big dramatic challenges of our age’. Reuters

The UN Secretary-General (SG), António Guterres, presented his annual report to the General Assembly in New York on September 20 and issued a dire warning to the assembled global leaders, when he stated: ‘Let’s have no illusions. We are in rough seas. A winter of global discontent is on the horizon. A cost-of-living crisis is raging. Trust is crumbling. Our planet is burning. People are hurting – with the most vulnerable suffering the most. The United Nations Charter and the ideals it represents are in jeopardy.’

The warning has acquired a definitive contour with the Russian President raising the N-ante in the Ukraine war.

Listing the major global challenges in a pithy but persuasive and impassioned manner, the SG dwelt on climate change and biodiversity loss, inter-state armed conflicts with the war in Ukraine on top of the list and challenges to securing sustainable development for the more vulnerable demography worldwide. Further, he included the challenges posed by new technologies and rising hate speech and ‘out of control’ digital surveillance.

Challenges to the future of humanity and the fate of the planet are as big as they come in the security domain and ought to have created some kind of a ripple in the mass media. However, this apocalyptic warning of the SG was met with a near-metaphoric yawn — at least in one cross-section of the print media in India. On September 21, none of the major Delhi dailies had this critically relevant news story on page one; and where it appeared, it was tucked away in the inside pages in a single column. In contrast, the demise of Queen Elizabeth and the extended funeral proceedings received saturation media coverage — thereby reiterating the familiar adage that ‘everyone loves spectacle and royalty’ and really bad news can be tucked away in an out-of-sight-out-of-mind manner.

But the SG’s warning acquired a very definitive contour on Wednesday when Russian President Vladimir Putin, in a televised address, raised the ante in relation to the war in Ukraine. Given the unexpected Ukrainian tactical gains on the battlefront and the political setback at the SCO summit in Samarkand (September 16) where Moscow’s ‘special operations’ did not receive the support or endorsement expected from Beijing and Delhi, one may conjecture that the Putin game-plan has become more militarily assertive. For the first time since the end of World War II in 1945, Moscow ordered partial mobilisation of its reserves and announced that referendums would be held in the breakaway regions of Ukraine so that they could be integrated into Russia.

Putin asserted that the US-led West was engaging in ‘nuclear blackmail’ by discussing the potential use of the dreaded nuclear weapon. He added: ‘In its aggressive anti-Russian policy, the West has crossed every line. This is not a bluff. And those who try to blackmail us with nuclear weapons should know that the weathervane can turn and point towards them.’

US President Joe Biden, who spoke later in the day at the UN, rejected the Putin claim that Moscow was being threatened, and chided Russia for transgressing its nuclear non-proliferation commitments. He added: ‘A permanent member of the United Nations Security Council invaded its neighbour, attempted to erase a sovereign state from the map. Russia has shamelessly violated the core tenets of the United Nations Charter.’

The calibrated military escalation by Moscow, which also includes a not-so-veiled threat to use the nuclear weapon if its territorial integrity is threatened, is eerily reminiscent of the Cold War years. During that period, the US and its NATO allies invoked the tactical nuclear weapon to thwart a potential Soviet military advance into what was then West Germany.

Luckily for the world, the Reagan-Gorbachev detente enabled a gradual lowering of the superpower nuclear threat and an earnest political commitment made that a nuclear war was an unthinkable proposition for the US and the former USSR. The sanctity of that commitment is now frayed and the irony is that both Biden and Putin were witness to that phase of history.

Can the world ignore this disturbing turn of events and presume that this is all bluff and bluster from Moscow and that no political leader in 2022 would actually take recourse to nukes? Caution is called for, since Putin has not acted as per conventional wisdom and his February 24 invasion of Ukraine defied the received wisdom of the day.

While the likelihood of a nuclear weapon being used anywhere in the world is catastrophic and should be prevented, the challenge posed by Moscow is complex and tangled in post-Cold War history. Russia accuses the US of perfidy and has made the restoration of territorial consolidation apropos Ukraine a lightning rod issue. If there is no consensual resolution of the Russia-Ukraine impasse and Putin’s threat is tacitly accepted – will this set a precedent for Taiwan and other long festering territorial disputes?

Guterres was being accurate when he surveyed the spectrum of security challenges and candidly told the global leadership that ‘we don’t have the beginning of a global architecture to deal with any of this.’ Global security and the well-being of its citizens is being mortgaged, alas, in an emotive and short-sighted manner on the anvil of high octane geopolitical tensions — the leitmotif of this decade.