Today, Ukraine is fighting for ‘self-defence’ against Russian aggression. But, why did Russia invade? The Pope told the world in May that Russia reacted because of ‘NATO barking at Russia’s door.’ Clearly, it’s a prolonged provocation which had reached a menacing proportion, creating an existential threat to a big nation. 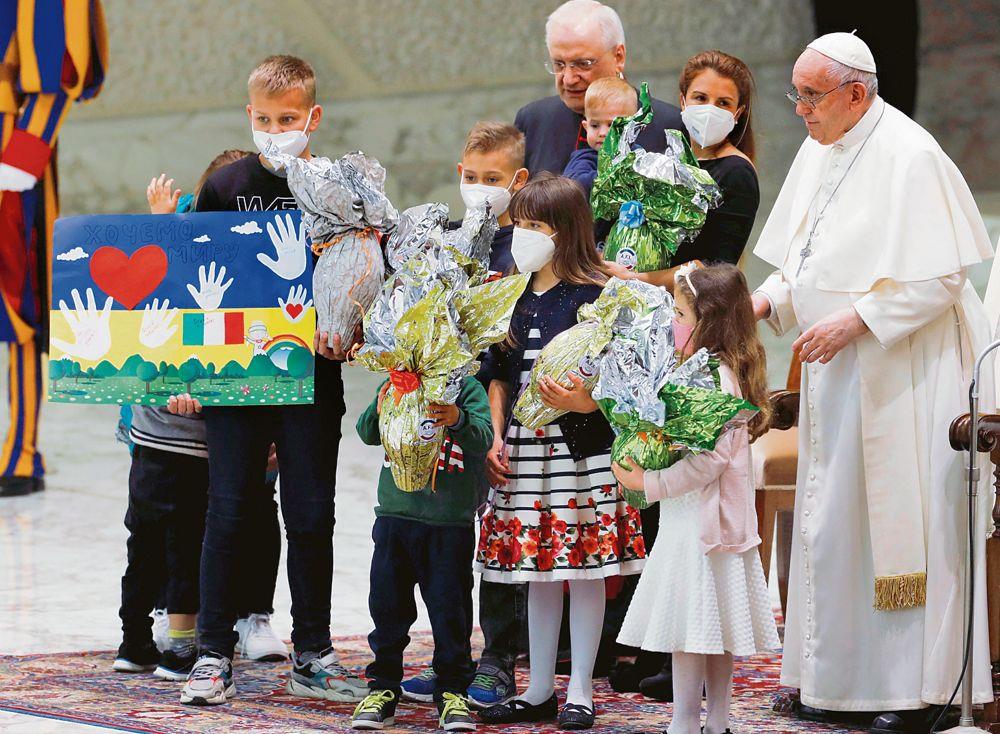 On May 2, over two months after the Russia-Ukraine war began, Francis, the Holy Pope of the Roman Catholic Church, agonisingly stated that “the real scandal of Putin’s war is NATO barking at Russia's door”, which caused the Kremlin to “react badly and unleash the conflict”.

It was too devastatingly honest, fair and objective a statement from the Pope in the midst of turbulent polity and diplomatic bickering in the West. Nevertheless, that one candid statement of the Pope raised his respect and stock several notches in the eyes of people transcending religious and national barriers. He truly expressed himself on inherent human folly and the need to be fair even in midst of fatality and fighting. He surely must have been disturbed to see another white Christian-versus-white Christian conflict in Europe, which is already facing a rapidly declining demography.

In a way, what the Pope had stated in May also is what the Russians have been saying regarding the Ukraine invasion, referred to as “special military operations”, thereby putting the ball in the West’s court and signalling that a solution to the bloodshed between Christian nations must be sought quickly.

Nevertheless, the Pope’s view (on September 16) on the conflict appears subdued, muted and fixed on the justification of ‘just war’ and ‘morality’ of weapon supply by non-belligerents to a belligerent. That’s curious because it shows the Pope in new light, being more flexible towards fatal conflict. Yet, these words cover a broader perspective on the ongoing European conflict.

The Holy See Highness further explained the difference between morality and immorality: “This is political decision....It can be immoral if intention is provoking more war, or to sell arms or dump arms that a country no longer needs. The motivation is what qualifies morality of action.”

The Pope, however, clarified that ‘dialogue’ with the ‘aggressor’ is a way to ‘peace’ which should never be avoided. And finally, he stated that the present conflict for Ukraine follows the 'just war' principles which allow for a proportional use of deadly weapons for self-defence against the aggressor nation.

Indeed, His Holiness’ statements of May 2 and September 16 are pregnant with wisdom. Nevertheless, let's see as to whether the latter statement could be seen from the theory of ‘natural justice’ because it takes two to tango. The Pope mentioned morality and just war. Natural justice is defined in a ‘moral’ as opposed to a legal sense. Why? Because in a conflict, it is necessary to hear the points of both parties. Thus, while the Pope justified the Russian aggression as a ‘reaction’ to the western “barking at Russia’s door” in May, ‘morality’ and a ‘just war’ come to the fore in September.

Contextually, what’s a ‘just war’ (Latin, bellum justum)? How just is a ‘just war’? Who arbiters to pronounce the verdict? Defined legally, a ‘just war’ is one that the “proponent considers morally and legally justifiable, such as war against an aggressive regime.” Under the Roman law, before war could be declared, the ‘fetiales’ (group of priests who monitored international treaties) had to certify the Senate that just cause for war existed. With the advent of the UN Charter, however, the concept of bellum justum lost its legality as the Charter outlaws the use of force except in ‘self-defence’.

Today, Ukraine is fighting for ‘self-defence' against the Russian aggression. But, why did Russia invade at all? When the Holy Pope told the world in May that Russia reacted because “NATO barking at Russia’s door”, clearly it's a prolonged provocation which had reached a menacing proportion, creating an existential threat to a big nation. Any doubt? If so, then why couldn’t it also be referred to as Moscow’s ‘just war’ for self-defence? Being physically threatened for two decades, wherein a perceived hostile act was slowly and steadily creeping into Moscow’s vulnerable underbelly through the Balkan-Black Sea axis? Moscow is a ‘bad man’. But, there grew cause-of-action for the bad man, too, which couldn’t be ignored any more. In the process, Ukraine is the battleground, a laboratory for an experiment of war hardware, both old and new.

Understandably, there are sympathisers and supporters galore for the invaded Ukraine, but there's none to propound the impending possibility of an ecological and environmental disaster! One wonders as to what will be the post-conflict atmosphere in Europe if the violence prolongs with 24x7 missiles, bombs and chemical reactions of thousands of small and medium arms. Water, soil, air, all will be polluted, contaminated, poisoned and will become the harbingers of physically/mentally disabled children with incurable diseases, akin to post-1945 Japan.

So, whether the best of the best in the world calls the present Russia-Ukraine conflict a noble intention, true motivation, supreme morality, just war, right action, possible dialogue or ultimate peace for mankind, mass fatality is an ugly reality. Indeed, those dead will remain dead as the big boy’s non-returnable bank loan. But, those alive, too, will remain dead even if they are not dead.

Europeans will never learn from their love for long, protracted and endless wars of history. Twice, they dragged the world to a catastrophe in the 20th century. And there exist in history books, innumerable European wars; up to 100-year wars, crusades, Napoleonic wars and countless bloodshed through its soil — from the 476 AD fall of the Western Roman Empire and the simultaneous establishment of the Eastern Roman Empire, known as the Byzantine Empire (Byzantium) at Constantinople (Istanbul), to the fall thereof in 1453 AD at the hands of Mehmet II of the Turkish Ottomans who took control of more than half of Europe, Asia Minor, Levant, the North African coast; with ceaseless wars following in true traditional trends of Europe’s culture of combat.

What’s inevitable, however, is that war will inflict an irreparable damage on the entire European geography and demography. And those remote non-Europe areas, too, won’t escape the after-effects thereof. There once existed a conceptual ‘Holy Roman Empire’, the history of which was created in heartland Europe, broadly consisting of 11 countries — Germany, Austria, Belgium, Czech, Denmark, France, Italy, Luxembourg, Poland and Switzerland — lasting more than a millennium till August 1806, with the centrality of the Holy See’s spiritual authority, interspersed with an occasional tinge of temporal power.

In the end, primarily owing to the ceaseless bloodshed, Voltaire’s somewhat pungent epithet sticks: that “it was neither holy, Roman nor an empire.” Endless war and eternal Europe are synonymous. Wreckage and wealth are the twin gifts of Europe’s warring history.