Why, unlike 2014, trade and economic fronts of RSS are treading cautiously 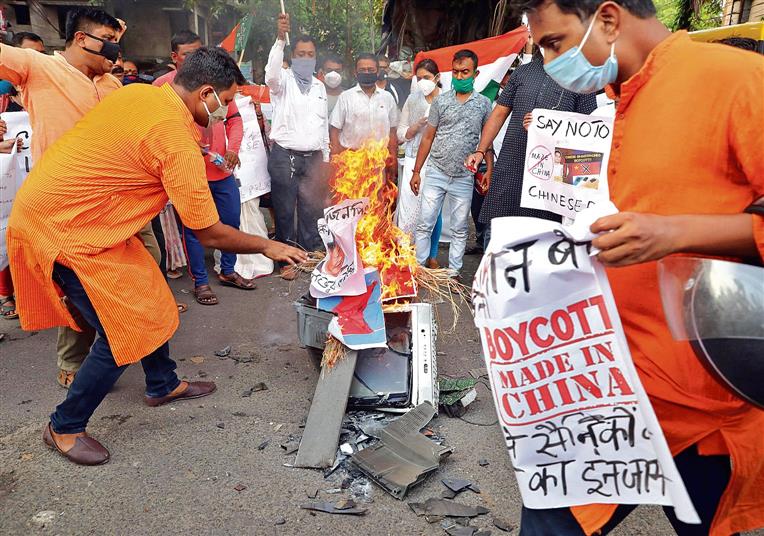 Toned down: The boycott bluster has exposed the limits of the ‘nationalist’ rhetoric that would have soared had another neighbour done to India what China has.

On June 18, when the pandemic curve had peaked in much of India, PM Modi opened 41 coal blocks for commercial mining. His decision freed India’s state-controlled coal sector for private players. It was contextualised as a decisive move towards realising the goal of ‘atmanirbhar Bharat’, a slogan coined by the PM ostensibly to invoke the ‘nationalist’ spirit in a time of deep crises, caused by the pandemic and China’s incursions. His single-minded agenda to put the pedal to the metal was welcomed by influential thought leaders who believed it was time to kick in stimuli after the virus wreaked immeasurable damage to the economy. The coal auction move is projected to bring in Rs 33,000 crore of capital investments over the next five years or so and make India the largest exporter of the fuel.

The Bharatiya Mazdoor Sangh (BMS) and the Swadeshi Jagran Manch (SJP), both significant fronts of the RSS that are quick to weigh in on official decisions, especially when it comes to unlocking vital sectors of the economy and welcoming private participants, are treading cautiously. Switch back to 2014 when the Modi government had signalled its willingness to ‘reform’ the coal industry but was stopped by the BMS. The BMS is India’s largest trade union and the dominant one in Coal India, a ‘navratana’ PSU and the world’s foremost coal-producing company. The BMS threatened to paralyse Coal India’s operations and relented only after extracting an assurance that auctioning was not a prequel to privatisation. The move did not take off.

What changed between 2014 and 2020 for the BMS and the SJM? From Vajpayee’s time, these organisations were used to leveraging their reputations as powerful lobbyists and policy influencers, reputations that preceded their arrival on the political scene. Why now the silence? The transient face-off in 2014 was the first and the last because the BMS and SJM realised that the Modi regime was dogged in pursuing and implementing decisions that it thought were central to its governance blueprint as long as these did not run contrary to the RSS’s core ideology or hurt the BJP’s political interests. The alterations proposed in the Land Acquisition, Rehabilitation and Resettlement Bill, initially mooted with bravado as a statement of economic liberalisation, were dumped after the Modi government was tagged as a ‘suit-boot ki sarkar’ by the Congress, and more importantly, after the SJM trashed the amendments. Six years ago, Modi was finding his feet in Delhi. He did not wish to alienate an RSS affiliate. The SJM later underplayed its role and said had it stopped the Congress from taking credit for the land Bill freeze and reaped the plaudits itself, it might have been called a second National Advisory Council, which it was afraid of. Second, in his brush with the VHP and the Bharatiya Kisan Sangh as Gujarat CM, Modi triumphed over these Sangh wings because the RSS was on his side. That experience was a cautionary tale to the BMS and the SJM. The Modi government has established itself as a better guarantor of the Sangh’s ideology and world-view than Vajpayee ever was, so a ‘compromise’ on economic reforms was considered small change in lieu of the sweeping transformations carried out in law and the Constitution.

This is why the BMS and the SJM only added their voices to the ‘boycott Chinese imports’ campaign that began in the aftermath of the Galwan valley confrontation instead of leading from the front, which they would have, had an opposition party ruled at the Centre. They know that if they take the vocal-for-local call too far, the consequences may become dire for India and its economy to handle. To them, the ‘atmanirbharta’ slogan is a convenient political candy-coat to explain away the government’s major transgressions.

The BMS’s website delineated its wish-list for the 2020-21 Budget that was silent on price rise, the battered unorganised sector, the seriously impacted MSMEs and the economy at large. However, it emphasised that products from China must be named and proscribed.

On June 17, Ashwani Mahajan, the SJM’s convener, stated that the vocal-for-local entreaty would stop the ‘unfair dumping of Chinese goods’. The SJM retains a streak of independence that was on brazen display in Vajpayee’s time when it dared to pillory the former PM in cartoons in its mouthpiece. The SJM recognised that India’s relationship with China was ‘asymmetrical’ because the imports from China formed 18% of the total volume, and until India reduced its dependence on China in critical areas like active pharmaceutical ingredients, solar panels and rare earth, it was not in a position to use economics and trade as weapons.

Amid incendiary hollers from stray BJP hotheads like Joy Banerjee, a West Bengal actor-turned-neta, who warned that those using Chinese products should be maimed, and Sadanand Shet Tanavade, the Goa BJP chief, who said the Chinese would feel the pinch harder on the wallet than the bullets on the border, came a reality check from Ram Madhav. The general secretary stated that the government had not announced a boycott call. He added it was a ‘popular sentiment among the people of India’.

Sentiment or not, the boycott bluster exposed the limits of the RSS-BJP’s ’nationalist’ rhetoric that would have soared skyward had another neighbour done to India what China has.

To conclude with the coal auctions, the lone voice of dissent against the government’s decision was Hemant Soren’s. The Jharkhand CM challenged it in the Supreme Court because of the 41 earmarked blocks, 20 are in his state that has 83.15 billion tonnes of coal reserves. Soren’s case was straight: stakeholders must be involved before making such a move because it was not just about raising money but maintaining an equilibrium between commercial mining and sustainable development. Any takers?