Australia is dealing with its racism problem through legislation, and by actions and words from role models — cricketers must set better examples of non-abusive behaviour their fans could follow 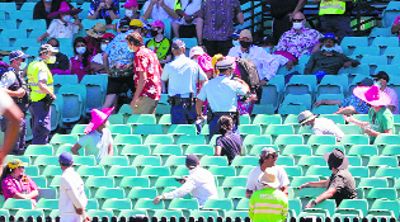 Police evict spectators in Brisbane after a complaint by Indian cricketers. AP/PTI

FROM January 1, Australia sings a slightly tweaked national anthem — in the second line, “young” has been removed, substituted with “one”, so now it goes:

With this change, Australians have officially recognised that their nation is not “young”; that it didn’t come into existence only when it was discovered or colonised — that the Australian nation predates the waves of immigration over the centuries.

The change, minor in semantics but deep in symbolism, was not welcomed by all. Yet, it is a sign of modern Australians coming to terms with the past, which was cruel and bloody, as colonisation projects always are; it was racist, too, as colonisation projects always are. The beaten people, always, are deemed inferior, and everything is bad about them — their clothing, food, language, their morality. Conquerors make efforts to turn the enslaved people into an image of themselves — speaking their language, worshipping their god, wearing their clothes.

Right until the 1970s, mixed-race children of aboriginal women were being ‘removed’ — stolen — through government policy. The White Australia policy was officially ended only in the 1970s. This was not so long back — thus, it’s a miracle that in such a short period of time, Australia has achieved a rich diversity of culture and people, and legal equality for all. This is enlightenment at work.

But mixing people isn’t without problems. Scientists explain that caution and suspicion are built into our DNA because extreme caution gave human beings a better chance of survival. Outgroup suspicion and prejudice are universal and after millions of years of their existence, only now, over the last few decades, have human beings decided it’s unjust to be suspicious of a group of people just because they’re different.

Australia is grappling with its racism problem and dealing with it through legislation, and by actions and words from role models.

For equality and respect

A few years ago, walking back to our rented apartment close to the Melbourne Cricket Ground after a day/night match ended late, I and a friend saw a taxi suddenly screech to a stop not far from us. From the back doors two young women emerged — they were very drunk, and they were shouting at the driver, who too came out and angrily banged his door close and shouted back at them. He was a tall, turbaned young Sikh. The two women walked away and disappeared into an apartment building, laughing and taunting the driver. We wanted to hear his story — he said the women, having reached their destination, said they had no money to pay him. "This happens often," he said. "They get drunk, hire a cab and don't pay. It gets ugly and they shout abuse, and it is often racist."

Other immigrants and visitors in that country have told this writer over the years that in even cosmopolitan cities such as Sydney or Melbourne, you might be called a black something or the other by a white person across an isolated street, and it can be much worse in small towns. The perpetrators are mostly young and drunk — and constitute a small minority. From personal experience, one can say this is true. As Ravichandran Ashwin said the other day, Indian cricketers have suffered much abuse in Australia, sometimes racist. Australian cricketers, tough as nails, would sledge their own grandmother in a sporting contest — being tough in sport is central to the Australian identity. But abusive sledging is not in tune with the modern notion of equality and respect for all people.

Mohammed Siraj suffered abuse, a lot of it allegedly racist, in Sydney and Brisbane. The perpetrators were young and drunk. They need better models of behaviour — Australian cricketers, especially, must set better examples of non-abusive behaviour their fans could follow.