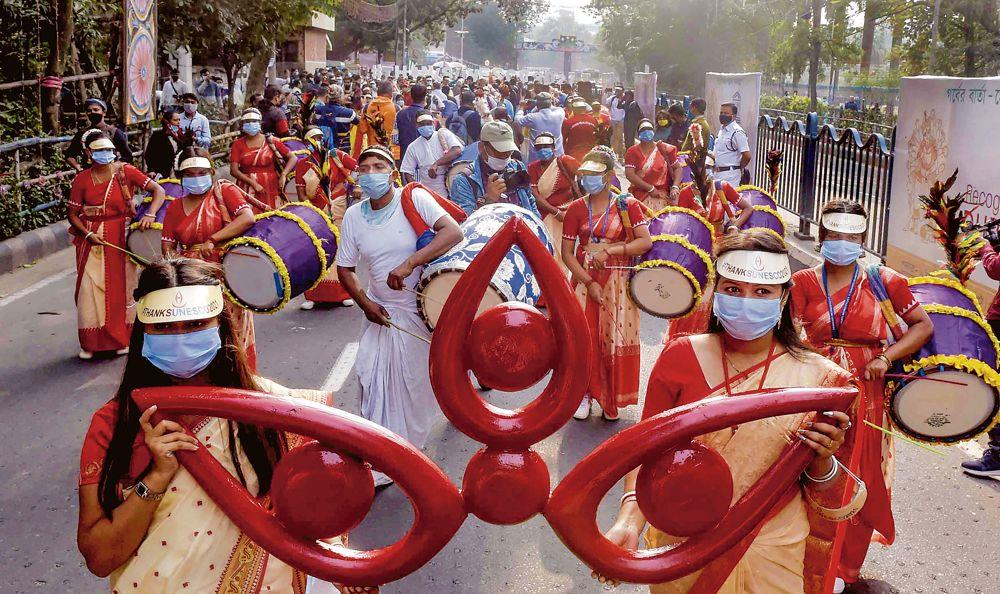 Kolkata’s Durga Puja is now a UNESCO cultural heritage not only on account of solemn devotion that this occasion arouses but also because of the joy and mirth that accompany it. Only after Durga Puja moved from just prayer to prayer plus that it evolved to its current manifestation and for that we must thank urbanisation.

We owe it to urbanisation to bring merriment into our world. Without it, traditional distances would prevail, drastically cutting out the happiness quotient of festivals.

As long as Durga Puja was confined to ritually marked spaces (or, thakur dalan) it was primarily worship and prayer and that would not have won it UNESCO’s recognition. It needed to move from rural to urban Bengal to acquire its current cultural expression replete with elaborate marquees (or pandals), food, theatres, films, and, most of all, fun.

Durga Puja transformed in stages. Initially, only the landed rich hosted these ceremonies and kept the riff-raff out. In the late 19th century, a group of Brahmins, insulted at not being invited, organised a semi-cooperative puja with a larger membership. But it was only after Durga Puja came to Kolkata in the early 20th century that it truly became a public festival.

It is this contemporary manifestation of Durga Puja that UNESCO was pleased to include as an intangible heritage. Though the puja caught UNESCO’s eye, Ganesh Chaturthi in Mumbai arouses as much joyful participation. Once again, this festival too gained in prominence after it moved from solemn ritual in the house of Peshwas to a public ground in Mumbai.

Bal Gangadhar Tilak first brought Ganesh Chaturthi to Girgaum, Mumbai, in 1893. He did it with the intention of firing public enthusiasm for the national movement and bridging caste divides. It was also a symbolic challenge to colonial authorities who placed restrictions on public gatherings. Needless to say, as urbanisation grew, so did Ganesh Chaturthi.

This shift in venue from the homes of the privileged to public spaces would have been unthinkable, but for urbanisation. The unflinching grip of class and status that held rural folk loosened in the urban world. Now, past identities mattered less, allowing people to meet freely and anonymously. If there was a grip at all, it was a velcro one, easily adjustable.

All of this tells us that we owe it to urbanisation to bring laughter and merriment into our world. It is not just slums, violence, and dirt that should characterise our towns and cities, for, if given a fair shake, joy can also colour our urban existence. The soft power of celebrating together generates more harmony than any number of posturing from political podiums.

In other words, give urbanisation a chance! It is not a bad word.

Christmas, too, attracts attention today because it moved away from pure ritual, most notably with the arrival of Santa Claus. This again was an urban affair. Santa, as Father Christmas, wasn’t a religious figure but a jolly, chubby, old man addicted to gift giving. Once again, both Santa and merriment in Christmas grew with urbanisation, particularly after WW II.

The carols at Christmas are all-time hits and practically every singer of repute in the West has an album dedicated to them. Gift-giving too exploded with urbanisation and from toys to cars, every commodity came with commercial sweet sell. Through all of this, the Santa myth had to be kept alive or else the fun would be gone. Without Santa, why long for Christmas?

Incensed by how Santa was displacing Christ, the Catholic clergy in Dijon, France, decided it was time to act. In 1951, they called the townspeople and their children to church where they first damned Santa as a pagan and then publicly hung his effigy and burnt it. As this act failed to win too many friends, both locally and in the national press, Santa Claus lives on in Dijon.

Anthropologist Claude Levi Strauss famously noted that Santa is kept alive by older people who don’t believe in him but encourage their children to do so by plying them with gifts. This is so different from religion where the older you get, the more you believe. Yet without keeping the myth of Santa going, there would be no gift, no tree and the lights would dim at Christmas.

It is only when worship couples with joy and laughter that people truly come together in camaraderie, caring little for class, caste, wealth and status. Commercialisation may pressure us to junk the old and buy the new, yet Christmas revellers want old fashioned fun. The same carols are sung and the same baubles decorate the real or fake pine tree at home.

So many worshippers of Durga reverentially fold their hands for anjali in the morning but stay on in the pandal to meet friends, eat Mughlai paranthas, eggs and sandesh. Take all that fun away and watch the Durga Puja become a different phenomenon and it may not then attract UNESCO’s attention. Did we ever think of thanking urbanisation for these good times?

This is the story of nearly all religious festivals, whether it is Durga Puja, Ganesh Chaturthi, Eid, or Holi. The ritual aspect is the legitimising factor, but without urbanisation, traditional distances would prevail, drastically cutting out the happiness quotient of these festivals. Granted, market forces come in, but used wisely, that is part of merrymaking.

The Santa Claus image got a boost when Coca Cola decided to use it in its commercials and gave it a red coat, cherubic cheeks and sparkling shiny eyes. Years later, the origin of the familiar Santa as Father Christmas is lost. What remains is the depiction of wholesome good cheer now even endorsed by those who would never touch Coca Cola.

On such festive days, alarm clocks are denied their sadistic morning pleasure. The kids are already out of bed in anticipation with their glad rags on to match their smiles. Besides, why should only adults have all the fun?