While China says that America’s actions are aimed at its containment, the US argues that these are a response to China’s aggressive intimidation of US allies and partners and intended to thwart Beijing’s forced takeover of Taiwan, which would upset the current political calculus to America’s disadvantage. 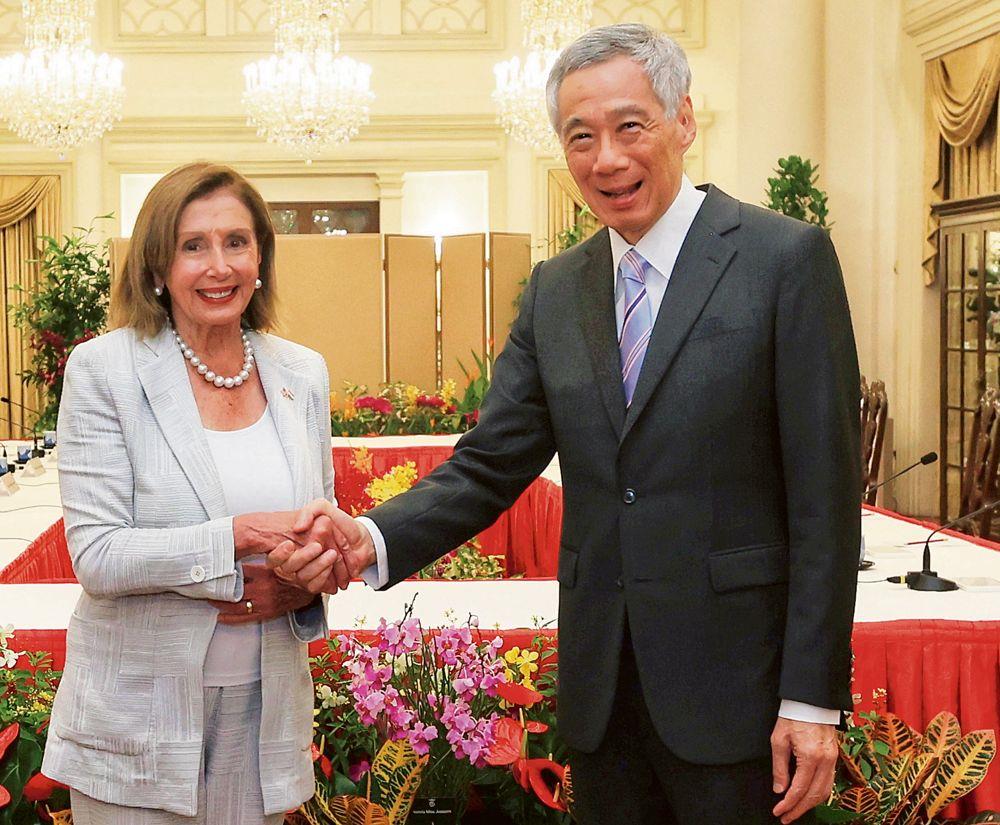 Outreach: Nancy Pelosi (left), Speaker of the US House of Representatives, started her Asia tour with a visit to Singapore. AP

The controversy over the Taiwan visit of the Speaker of the US House of Representatives, Nancy Pelosi, has adversely impacted US-China ties, with Chinese President Xi Jinping and his officials threatening that “those who play with fire will perish by it” and hoping that the US knew what it was doing.

The US President, Joe Biden, had assured Xi in direct talks on July 28 that the US “opposed unilateral efforts to change the status quo or undermine peace and stability across the Taiwan Strait.” But the Chinese leadership, which has little understanding of democratic societies, had not budged from its stand that Pelosi’s visit must be cancelled.

The then Speaker of the US House of Representatives, Newt Gingrich, had gone to Taipei in 1997 and met Taiwanese President Lee Teng-hui, much to Beijing’s irritation. US congressional delegations have made several visits to Taiwan in recent years. The then administrations had sent even cabinet-level officials: in 2020, Health and Human Services Secretary Alex Azar had visited Taipei.

The Chinese are more upset now as they think that the US is gradually resiling from its earlier commitment to the one-China policy. There have been notable changes in the actual conduct of the US policy on Taiwan in recent years. Mike Pompeo, US Secretary of State, sent a congratulatory message to Tsai Ing-wen when she took charge as Taiwanese President in her second term in 2020.

The current US Secretary of State, Anthony Blinken, referred to Taiwan as a country. The Biden administration extended an invitation to Taiwan’s representative in the US to attend Biden’s inauguration in January 2021 and participate in the Summit for Democracy. The US State Department, in its fact sheet on Taiwan, made a few subtle but important changes on May 5, 2022, deleting an earlier wording which stated, “The US does not support Taiwan’s independence” and “it acknowledged the Chinese position that there is but one China and Taiwan is part of China.”

While China says that these actions are aimed at its containment, the US argues that these are a response to China’s aggressive intimidation of US allies and partners and intended to thwart Beijing’s forced takeover of Taiwan, which would upset the current political calculus to America’s disadvantage. The US Navy has stepped up its visits to the South China Sea and the Taiwan Strait by frequent despatches of its aircraft carriers, fighters, reconnaissance and anti-submarine warfare aircraft.

The Biden administration has altered the strategic environment around China by promising support to smaller ASEAN countries in resisting muscle-flexing by the Chinese coastguards, maritime militia and ‘patriotic fishing boats’ in the South China Sea. Beijing has responded by undertaking close fly-bys, obstruction of the aircraft, air and naval crews by sometimes using lasers and water cannons at unfriendly aircraft and repeatedly sending warplanes into neighbours’ air space.

Another reason Beijing is worried is that President Xi Jinping is currently on a weak wicket. The zero-Covid policy conceived by him has been extremely unpopular with the Chinese people; it has exacted a heavy toll on the economy, affected the functioning of a large number of industries, disrupted supply chains and spurred more unemployment and socio-economic distress. Similarly, his other policies, such as over-regulation of the technology and education sectors, ‘common prosperity’ which led to forcible payments by certain companies and rich individuals and lackadaisical handling of the real estate sector have slowed down China’s economy.

Xi will be seeking an unprecedented third term as President and would be required to present a report card of his achievements at the 20th Congress of the Communist Party of China (CPC) later this year. One of the accomplishments that Xi has touted earlier is the reassertion of China’s control over disputed territories with neighbouring countries such as India, ASEAN countries, Japan and Taiwan. The escalating high-level official support for Taiwan in the US would make him look weak and not in control of the most important relationship with the US.

Also, Xi would have calculated that a new Taiwan crisis would help him garner popular support by reigniting the nationalist card at home and muster the support of the senior CPC leadership in getting his third presidential term and appointing his favourites to important positions in the Politburo and the Central Committee.

Beijing is set to react strongly by sending its aircraft and ships deeper into the Taiwanese territory and attempting other intimidatory tactics. It is unlikely that China would initiate a bigger conflict with the US at this point as President Xi Jinping favours the maintenance of stability in the present period leading up to the CPC Congress. Xi is a cool, calculated and careful strategist; he chooses the time and scale of his reaction carefully and for him, his own and the CPC’s continuation in power takes priority over any adventurist action with an unforeseen and risky fallout.

While no major crisis is likely at this point, the US-China rivalry is getting deeper, more comprehensive and riskier. Some China watchers believe that once XI gets his third term as President, he is likely to get more emboldened, aggressive and determined in his ambitions in pursuit of his dream of China’s ‘great rejuvenation’. So, the world and China’s neighbours, including India, will have to prepare adequately to cope with such an eventuality.