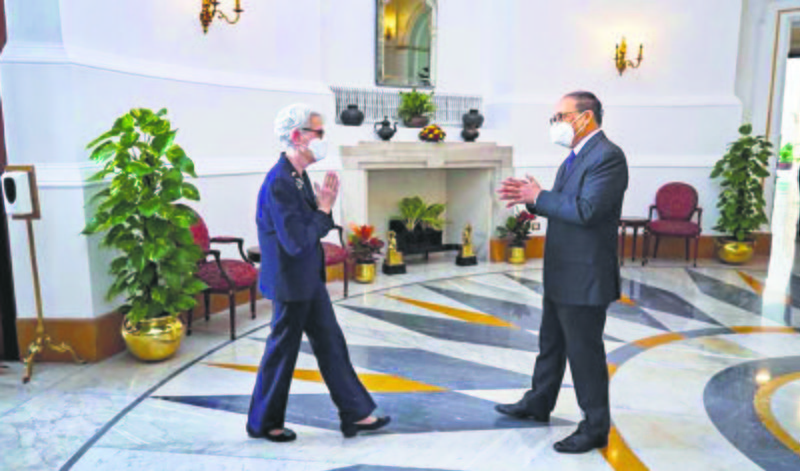 The disconnect: Deputy Secretary of State Wendy Sherman (left) knows that the US and India are certainly not ‘on the same page’. PTI

The US foreign policy towards the South Asian and Indian Ocean region is in historic transition. The policymakers in Washington are picking up the pieces from the chaotic withdrawal from Afghanistan, which created new facts on the ground. The implications for India’s external environment are profound and far-reaching.

The announcement that India will attend the conference on Afghanistan in the ‘Moscow format’ speaks for itself.

The Congressional hearings in Washington on the Afghan fiasco left the Biden presidency badly bruised, with the Pentagon commanders openly distancing from their commander-in-chief’s decision on troop withdrawal and the Pentagon and the State Department getting entangled in an unseemly blame game. ‘Global Britain’, donning the robe of a bygone imperial era, is cajoling the US to be brave-hearted. Asia holds breath, for this is not just about a failing state in the Hindu Kush. It’s history on the march.

The Central Intelligence Agency is spearheading the US’ re-engagement with the Taliban. The Special Representative for Afghanistan Reconciliation at the State Department since September 2018, Zalmay Khalilzad, is being cashiered. To survey the debris, Wendy Sherman, Deputy Secretary of State, recently passed through Uzbekistan, India and Pakistan.

As regards India, Sherman’s mission has been more of an uneasy holding operation to figure out a course of action designed to maintain the status quo under difficult circumstances. Simply put, it took Herculean efforts through two full American presidencies to lure the Indian stallion into the US stable, but now with the unravelling of its regional strategies, already weakened in the upheaval of the pandemic, Washington is worried that the moody horse of an anxious temperament might simply bolt away.

Now, how do you stop a horse from bolting? The right thing to do is to just go back to the walk again and make him realise you’re the one in control. That was what Sherman tried to do in Delhi — natural horsemanship. She created a narrative in three parts: One, Washington is not reverting to the infamous Indo-Pak ‘hyphenation’ in its South Asian strategy; two, the US and India are ‘on the same page’ as regards a way forward in Afghanistan; and, three, the salience of the US-Indian partnership lies not really in Afghanistan but in Indo-Pacific.

Delhi neither endorsed nor disputed Sherman’s narrative. However, such silence cannot airbrush the contradictions in the US narrative. In an interview in India, Sherman said her trip to Islamabad was ‘for a very specific and narrow purpose, we don’t see ourselves building a broad relationship with Pakistan. And we have no interest in returning to the days of hyphenated India, Pakistan.’ Evidently, Sherman’s assertion that Pakistan is no longer an anchor in Washington’s priorities was largely meant for Indian ears. But was it convincing?

The very next day, after talks with top Pakistani officials in Islamabad, including Gen Qamar Bajwa, Sherman corrected herself: ‘Afghanistan was at the top of our agenda, but we also discussed our cooperation in other areas, including the climate crisis, geoeconomics and regional connectivity, and ending the Covid-19 pandemic … the United States believes that a strong, prosperous, democratic Pakistan is vitally important for the region and indeed for the wider world.’

Washington is crafting new rites of passage involving Pakistan. Sherman hinted that Biden may soon be calling PM Imran Khan. Sherman’s reference to ‘geoeconomics and regional connectivity’ is significant, as she focused on these issues while in Tashkent on the first leg of her regional tour. Conceivably, the time has come for the operationalisation of the so-called Quadrilateral Diplomatic Platform — the US, Uzbekistan, Afghanistan, Pakistan — which Washington mooted in July rationalising that peace in Afghanistan and regional connectivity are inter-related templates.

The US no longer has the luxury of looking away from Afghanistan and Central Asia as it did at the end of the 1980s’ proxy war. Washington’s ‘strategic competition’ with China (and Russia) has a compelling Eurasian vector. Sherman knew Washington and Delhi are not holding the same book on Afghanistan, leave alone reading the same page. The announcement in Delhi that India will attend the conference on Afghanistan on Wednesday in the ‘Moscow format’ (Russia, Afghanistan, China, Iran, India and Pakistan) speaks for itself.

Interestingly, this announcement closely follows the Russian foreign ministry’s forewarning to the Biden administration that Moscow will not accept American military presence in Central Asia ‘in any form whatever.’ A senior Russian diplomat took a big leap forward on Friday that any US deployment to Central Asian region ‘on the pretext of struggle against terrorism… is categorically unacceptable for the Central Asian countries and for Russia, China and Iran, because we understand well enough what aims such bases in Central Asia would pursue.’

For the first time, Moscow is forcefully articulating the common stance of regional states to push back at the US attempt to return to Afghanistan. Certainly, against this backdrop, Sherman was way off the mark to allude to ‘same page’. India’s participation in the Moscow conference is a significant step forward to join the regional states in support of a process of intra-Afghan reconciliation and normalisation in Afghanistan in the long-term interests of regional security and stability.

Sherman’s thesis of the ‘different paths’ of China and India’s rise — and her rap on our knuckles over the S-400 missile deal — is a blasé attitude to intrude into our strategic autonomy. What is it that Washington is attempting through AUKUS — or by propping up a puppet Nawab through Quad? This is not a matter of India’s ‘self-confidence’ as US lobbyists propagate. Time past from the shameful chronicle of Asia and western dominance is revisiting. ‘Global Britain’ is back east of Suez.