US-Iran conflict must not be allowed to escalate

Iran’s use of terrorism as a tool of statecraft makes it fundamentally different. Years of US pressure have resulted in limited arms sales; working via the Islamic Revolutionary Guards Corps is not a choice but a necessity. Where are we headed? The first effect is economic as this region is rich in oil. We were the second largest importer of Iranian crude. Any disruption of supplies will have an adverse effect. Remittances from Indians in the Gulf could be hit. 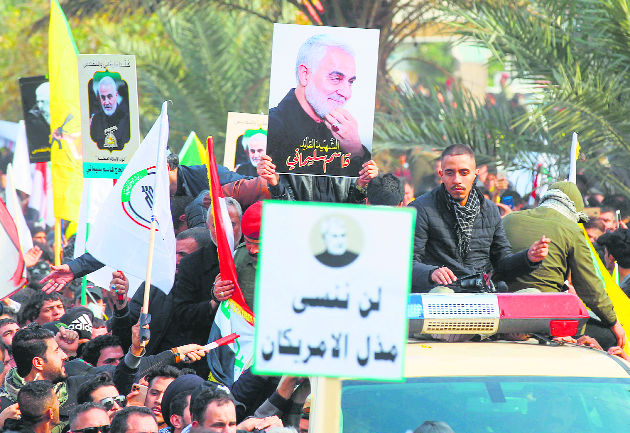 Complex: There has been growing Iranian activism in the Middle East despite US efforts to impose sanctions and isolate Tehran.

January 3 ushered in the new decade in a turbulent manner when a US drone attack killed Maj Gen Qassem Soleimani, head of Quds Force, the man behind the proxies and Al Muhandis, the founder of Kataib Hezbollah in Baghdad. A fundamental difference between Shia and Sunni terrorist organisations is that the former enjoy direct state support.

This event has far-reaching global implications and direct regional fallouts. The grief at the funeral of General Soleimani, who the New Yorker called ‘The Shadow Commander’, was unprecedented. His death capped a week of hostilities which had escalated at lightning speed. The US, of course, described it as a “decisive defensive action”. The state-run Iranian TV called this the “US’s biggest miscalculation” and analysts across the world fear reverse effects.

Iran has been accused of supporting terrorism worldwide. There has been growing Iranian activism in the Middle East despite US efforts to impose sanctions and weaken their economy and isolate Tehran. In April 2019, the US designated the Islamic Revolutionary Guards Corps (IRGC) as a terrorist organisation — the first time this label has been slapped on a government entity.

General Soleimani is attributed to strengthening the relationship with the Hezbollah, establishing relations with Iraqi Kurdish leaders and Shia Badr Organisations in Iraq. While he also helped the US against Al Qaeda in Afghanistan for a brief period, he has also been closely involved in the conflict in Syria. The CIA described him as “the single most powerful operative in the Middle East” and the principal strategist in Iran's effort to combat Western influence and promote the expansion of Shiite and Iranian influence. One of the staunchest supporters of President Assad in the Syrian civil War, he played a key role in the fight against ISIS in Iraq. A popular national figure, he was regarded as the second-most powerful person after Ayatollah Khameni.

Iran has been supporting Shia terrorist organisations, such as the Lebanese Hezbollah, Badr Organisations, Katib Hezbollah, Al Sistani militias in Iraq and Houthis in Yemen. It also supports Hamas and the Palestine Islamic Jihad which are Sunni organisations. It worked towards creating an ‘Axis of Resistance’ and has been active in combating ISIS and Al Qaeda.

Al Muhandis was the founder of Kataib Hezbollah that led the assault on the US Embassy and the rocket attack that killed an American contractor, which set off this chain of events.

The complexities of the Middle East are hard to fathom, with conventional forces, local militias, foreign powers and terror groups all collaborating with or opposing each other in different theatres.

Though the US hates Iran for developing nuclear capabilities, supporting terrorism and being vehemently anti-Israel, it was, however, collaborating with Iranian-backed militia against ISIS in Iraq. There is no doubt that the pause button will now be pressed with regard to these operations and may lead to the ISIS regrouping.

Iran’s use of terrorism as a tool of statecraft makes it fundamentally different. Years of US pressure have resulted in limited arms sales; hence working via the IRGC is not a choice but a necessity.

Where are we headed? The first effect is economic as this region is rich in oil. In fact, General Mc Chrystal once said that the US’s primary concern in this region was to ensure the flow of oil. Prices have already risen; the beneficiaries are Saudi Arabia, Russia and the US. China is the biggest importer of Iranian crude and will be affected the most.

Iran is unlikely to take on US forces conventionally but will concentrate on accelerating its nuclear programme. At the same time, it has resorted to missile strikes on US targets in Iraq. However, it is unlikely to increase these as it risks alienating the Iraqis and will probably resort to retaliation through its proxies by targeting US assets or take similar action against coalition partners. This could even be by cyber attacks.

General Soleimani, in his death, may have achieved what he was unable to do while alive: that is, getting Iraq back towards Iran and strengthening the legitimacy of the Shiite leadership. The US has been asked to exit Iraq by a caretaker Prime Minister in Parliament in a vote by mainly Shia and Kurdish legislators. Iraq requires stability, peace and prosperity.

Iran has relations with both the Northern Alliance and Taliban in Afghanistan. An escalation of tensions may delay the pullout of US forces from Afghanistan as it would like to maintain a military presence on its flank. However, whether Afghanistan would allow its soil to be used against another country is the moot point. Incidentally, Afghani refugees in Iran have fought on Iran’s side in Syria, a task overseen by Gen Ismail Ghani, the successor to General Soleimani.

Ties between Pakistan and Iran have been tense for many years. Iran is wary of Pakistan’s support to Sunni militant groups and the killings of Shias in Pakistan. This large Shia population could unleash a sectarian crisis. However, at the same time, Pakistan’s economy is dependent on the US. It needs to walk the tightrope, but there is no doubt that the Pakistani Army will benefit from an increase in US-Iran tensions.

The US has provided a security umbrella to the Gulf nations. The threat from Iran to these nations has helped sustain its arms industry. The present developments reinforce this threat, particularly if Iran retaliates.

India has close historic ties with Iran and a strategic partnership. The Chabahar Port is seen as the gateway to Central Asia and Afghanistan. Though exempted from sanctions, the project has slowed, which is a reflection of the US factor. However, this could be in jeopardy in case fresh sanctions are imposed.

We were the second largest importer of Iranian crude. As most of our crude comes from this region, any disruption of supplies through the Straits of Hormuz will have an adverse effect. Remittances from Indians in the Gulf could be hit; their interests also need protection. Iran has also played a role in safeguarding our interests in Afghanistan.

India has a key role to play as it is friendly with both the US and Iran. India’s policy of engaging with everyone based on areas of convergence must see it shouldering global responsibilities in reducing tensions by asking both sides to exercise restraint leading to de-escalation.

Clearly, any further escalation between the US and Iran will not be confined to the Middle East. The success or failure of diplomatic efforts to calm tempers is just as crucial to the stability of Central and South Asia and has global implications. Peace, security and stability need to be the buzzwords.