While every good step, like the availability of a vaccine, is promptly credited to the PM, there is nobody accountable for the plenty of missteps that have fuelled the deadly second wave. If it is the PMO calling the shots, then let’s know who are the health experts, epidemiologists, economists and social scientists in the PMO who are in charge of the pandemic response or are advising him. 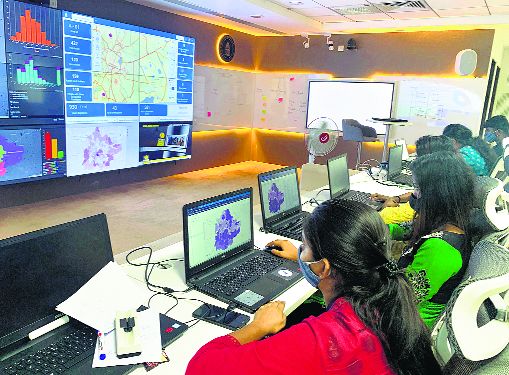 Needed: A transparent and accountable mechanism of decision-making to fight the second wave and be prepared for the next one. PTI

India is more than one year into the pandemic and is currently facing one of the sharpest waves of the Covid-19 spread. Time and again, our leaders and government experts have invoked the imagery of war while talking about combating the virus.

Prime Minister Modi has constantly exhorted people to join this war against the coronavirus. He spoke about a ‘second big war against corona’ while launching the so-called Tika Utsav (vaccine festival) on April 11, 2021.

In one of his speeches in 2020, he also compared the ongoing war against Covid-19 with the two World Wars and called for the same level of preparedness to meet the challenge.

If the Prime Minister thinks that we are in a war situation, then he surely must have a war cabinet and a national war room. As a natural corollary, there should be regional war rooms to tackle the situation on specific fronts (states with high burdens, for instance.

As of now, we are fighting the war — a mega health emergency — without such instruments that are not just ornamental, but are supposed to represent a cohesive response to the pandemic. No official press release or tweet of Health Minister Harsh Vardhan is complete without parroting this line: “the Prime Minister is personally leading India’s pandemic response” and that “he has been holding review meetings” every few days. At the same time, nobody in the government is accountable to tell the people the outcome of such review meetings as the situation on the ground keeps worsening, be it the ongoing oxygen shortage or the vaccination mess, irrespective of such ‘high-level’ reviews.

Other than the Prime Minister, who is credited for ‘personally’ supervising the response, we have some talking heads for television discussions. The most prominent is Dr VK Paul, a member of the NITI Ayog chaired by the PM. He is often assisted by Dr Randeep Guleria, director of the All-India Institute of Medical Sciences (AIIMS), New Delhi, and Dr Balram Bhargava, Director-General of the Indian Council of Medical Research (ICMR). Another official voice is that of Dr K Vijyaraghavan, Principal Scientific Adviser (PSA) to the government. NITI Ayog is a policy think tank, AIIMS is a teaching and research hospital, the ICMR is a research funding agency and the PSA is an advisory outfit.

Missing from the public eye is the health ministry — sometimes represented by a joint secretary in press conferences — and its agencies like the National Centre for Disease Control (NCDC). In addition, national and state disaster management agencies have a role in pandemic management.

Among all these agencies and men, there is a plethora of task forces, expert committees, empowered groups and so on. Yet, who reports to whom with what effect is all shrouded in mystery.

For instance, nobody in the government is willing to tell who directed the ICMR Director-General to ask clinical trial centres to complete vaccine trials by August 15, 2020, or censor research data on sero-prevalence studies; who asked the Ministry of External Affairs (MEA) to send millions of doses of vaccines to countries around the globe without accounting for local needs; why the Election Commission of India was not warned by any of the expert committees or scientific advisers about the dangers of an elaborate poll schedule and allowing mega rallies; or, the Uttarakhand Government on promoting the Kumbh mela; who decided to allocate Rs 100 crore to the PSA for vaccine-related work when it is neither a research nor an implementation agency; or, why did the Department of Biotechnology (DBT) not use Rs 900 crore it was given in 2020 to boost the production capacity of vaccine companies.

The most important question that begs an answer is: why the epidemiological data of the past year is not being shared with scientists, as demanded by many of them in an open letter last week?

While every good step, like the availability of a vaccine, is promptly credited to the PM, there is nobody accountable for the plenty of missteps that have fuelled the deadly second wave. If it is the Prime Minister’s Office (PMO) or the PM himself (as implied by the Health Minister and other ministers in their tweets, and BJP in its formal resolution) who are calling the shots, then let’s know who are the health experts, epidemiologists, economists and social scientists in the PMO who are in charge of the pandemic response or are advising him. For that matter, whether there is a document called a national pandemic combat plan or a national vaccination strategy, the country needs to know urgently.

All we have is a set of ambiguous guidelines, standard operating procedures, sketchy press releases, and orders issued by the Ministry of Home Affairs — none of which constitutes a national response plan or vaccination strategy. This is clear from the floundering responses of Central Government agencies in various high courts across the country hearing public interest petitions on the pandemic management.

Indian and foreign experts have been airing their views in scientific journals and other forums. The members of the India Task Force of the Lancet Covid-19 Commission have also recommended that the PM should convene a national war room consisting of chief ministers and chief secretaries of all high-burden states as well as leaders of all political parties to review the situation daily and coordinate their response. Such a war room should be assisted by an independent technical team of topmost public health experts, economists and social scientists.

Along with this, the government should listen to civil society, industry, and religious leaders too — not just as a formality but in order to take their inputs into decision-making. Anthony Fauci, an infectious diseases expert who is the face of pandemic response in the US, has also suggested a national war room to meet the challenge in India. Some states like Kerala have established state-level war rooms to monitor the situation, take decisions and coordinate action in real-time.

India needs a credible, transparent and accountable mechanism of decision-making to fight the second wave and be prepared for the next one.