Way ahead for Quad : The Tribune India

Way ahead for Quad

Despite contradictions in US policies, there is a need to strengthen cooperation 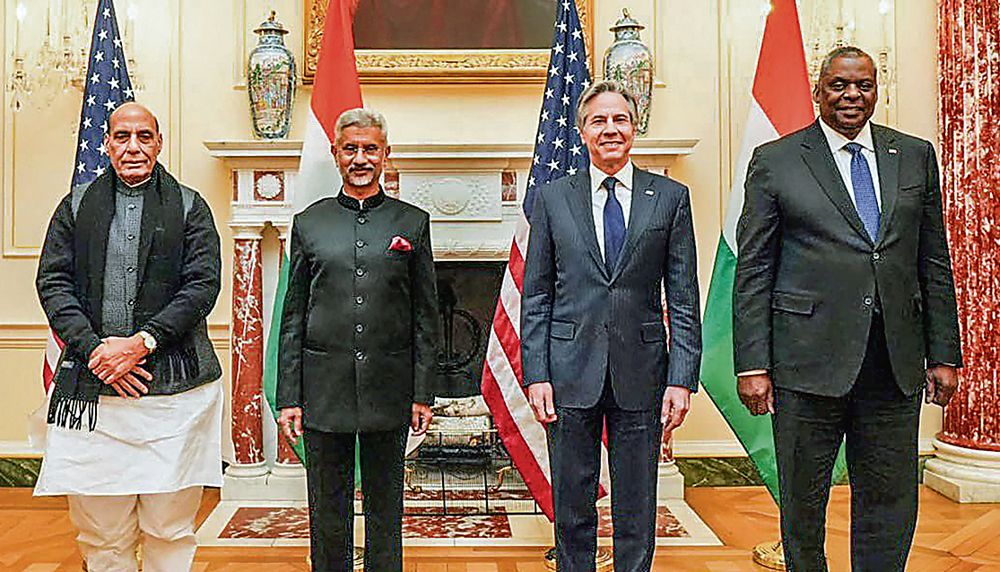 Consolidation: There is a consensus in both the US and India on the need to expand bilateral ties. PTI

Eyebrows were raised in Delhi when US President Joe Biden remarked last month that India was being ‘somewhat shaky’ on its policies on the Russian military intervention in Ukraine. This was barely a month after the four leaders of Quad — PM Modi, Australian PM Scott Morrison, Japan’s PM Fumio Kishida, and President Biden held a virtual summit on March 3. It was made clear publicly that they discussed developments in Ukraine, including the humanitarian implications of recent developments. Modi placed emphasis on a return to dialogue and diplomacy, while respecting international law and the sovereignty of nations. The latest Quad meeting is being held in Tokyo today. While Biden’s comments astonished many in India, the fact remains that he did support the India-US nuclear deal concluded by PM Manmohan Singh and President George Bush Jr., which led to the end of global nuclear sanctions against India.

The Vice-President outranks even PMs in diplomatic protocol. Yet in 2011, the then V-P Biden undertook a three-hour drive from Islamabad to meet the Pak army chief in Rawalpindi.

The discussions of Quad in Washington DC involved Defence Minister Rajnath Singh and External Affairs Minister Jaishankar on the Indian side, and their hosts Secretary of State Blinken and Defence Secretary Lloyd Austin. The talks covered issues ranging from enhancing production of vaccines to environment and economic development. There was a clear stress on ‘adherence to international law to meet the challenges to the rules-based order, including in the South China Sea’. China has violated the International Law of Seas with its neighbours. While a few members of ASEAN like Indonesia may challenge China’s maritime claims, there are others that refuse to do so, primarily because of fear. This was evident in the summit meeting that Biden hosted recently in Washington for the heads of government of ASEAN countries.

Biden’s views on India have been known from time to time. It is clear that he is determined to be firm in dealing with China, including on issues of US support for Taiwan. He has, however, not issued any statement on helping out Sri Lanka, when it is in dire need of economic assistance. The Biden administration’s approach appears focused on getting the World Bank and IMF to analyse Sri Lanka’s crisis, and act to meet its needs. He has, however, mended fences with UAE ruler Sheikh Zayed by sending his Vice-President Kamala Harris and Secretary of State Blinken to offer condolences on the recent demise of Sheikh Zayed’s father. His past strong references to actions by Saudi Crown Prince Salman have, however, earned him the wrath of the most powerful leader in the Islamic world. All this would suggest that we are dealing with a US President who is given to being harsh, and perhaps even impulsive. Biden, however, has highly experienced personal advisers like his National Security Adviser (NSA), and the Secretaries of State and Defence for dealing with China. Moreover, Kurt Campbell, the White House coordinator for the Indo-Pacific, is said to have realistic perspectives on the challenges posed by China across the Indo-Pacific.

Biden makes his likes and dislikes known openly. What is not known is his special regard for Pakistani Generals, notably four-star Generals. Unlike his predecessor, Biden has an intense dislike for former Pakistan PM Imran Khan, which only grew because of Imran’s visit to Russia, which coincided with Russian forces entering Ukraine. Biden’s displeasure was conveyed to Islamabad by Pakistan’s ambassador in Washington. But what was not so well known, was the regard that Biden has for the Pakistan army. Two such incidents make an interesting reading.

The Vice-President of a country outranks even PMs in diplomatic protocol. Yet on January 13, 2011, the then Vice-President Biden undertook a three-hour drive from the residence of his host, PM Syed Raza Gilani in Islamabad, to meet the then army chief Gen Ashfaq Parvez Kayani, in Rawalpindi, the headquarters of the Pakistan army. Barely, four months after this meeting, commandos from the US Naval Special Warfare Development Group raided a house in Abbottabad and killed Osama bin Laden. Biden’s affection for the Pakistan military, however, continued. He thereafter, gave an unprecedented welcome at the White House to Pakistan’s next army chief, Gen Raheel Sharif, in 2015. According to a White House statement, Biden ‘reaffirmed the United States interest in building a strong partnership with Pakistan that addresses our shared concerns on counterterrorism, economic and regional security concerns’. The US is now building bridges with a somewhat shaky coalition government headed by Shehbaz Sharif.

Despite these complications and contradictions in US policies, there is a consensus in both the US and India on the need to expand bilateral ties and strengthen cooperation in Quad. This has been manifested by the importance given to the Tokyo Quad Summit. There is recognition that Quad remains an important grouping to provide a credible balance of power to deal with Chinese territorial ambitions and strategic objectives in the Indo-Pacific Region. Quad needs to work out detailed plans for security cooperation with ASEAN countries like Japan, South Korea, Vietnam, Indonesia, and possibly the Philippines. Other ASEAN members are engrossed in their relations with China. They are unlikely to join any collective effort to deal with China. Moreover, greater attention needs to be paid to not only enhancing economic cooperation between Quad members, but also in expanding such cooperation across the Indo-Pacific.

The US NSA, Jake Sullivan, recently noted that the economic framework for Quad as ‘not a traditional, free trade agreement’, while adding that Quad would deal with ‘supply chains, the digital economy, clean energy and investments in infrastructure’. This does indicate a broad consensus between India and the US on the way ahead in Quad.