It is interested in theatre, not popular welfare or in normalising ties with India 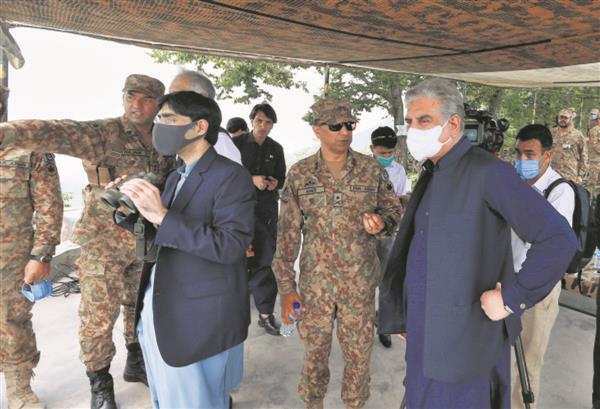 Agenda-driven: NSA Moeed Yusuf is being lauded in Pakistan for strongly conveying ‘home truths’ to India, and that too on Indian media. Moeed Yusuf, special assistant to the Pakistan PM ‘on national security division and strategic policy planning’, gave a long interview to a well-known Indian TV personality last week. Yusuf, an academic with a background, inter alia, in India-Pakistan studies, has been in his job since December last year. Earlier, he had a long stint with the US Institute of Peace, a US Congress funded think-tank in Washington DC.

Yusuf had sought an Indian media platform since some time to assert his establishment’s propagandist views to an Indian audience. His offer was ignored till he was interviewed recently. He used the interview to peddle the themes in a highly offensive manner that Pakistan has been pursuing against India, especially since the constitutional changes in J&K in 2019. These themes are: the illegitimacy of the constitutional changes, allegations of India supporting Pakistani Taliban and Balochi nationalist groups that Pakistan claims have undertaken terrorist acts on its territory, the nature of the Sangh Parivar’s ideology, which it claims is casting a malign shadow on the region, and Pakistan’s adherence to the International Court of Justice’s ruling in the Kulbhushan Jadhav case.

After spouting venom against India on all these issues, Yusuf claimed that Pakistan had received Indian messages expressing a desire to have a conversation between the two countries. As he put it ‘…in the past year, we’ve got the messages about a desire of (sic) conversation….’ He said Pakistan would like to first ascertain ‘whether there is intent to talk to get somewhere’. He expressed the apprehension that India only wished to talk to show the world that everything is ‘settled’ between India-Pakistan. In addition, he laid down the condition that talks would only take place if Kashmiris were a party to them. The Ministry of External Affairs did well to set the record straight by categorically denying that messages for talks were sent to Pakistan.

Yusuf is being lauded in Pakistan for succeeding in strongly conveying ‘home truths’, and at substantial length to India, and that too on an Indian programme. While this may give the Pakistani establishment some satisfaction, will it succeed in effectively pushing forward globally the Pakistani line on India? This is doubtful, not only because the facts are at odds with Pakistani assertions, but also because Pakistan lacks credibility on issues relating to terrorism, social harmony and democratic values and on J&K-related issues as well. This also applies to the follow-up on the Jadhav matter in the ICJ.

Pakistan has, for long, emphasised that India is involved in sponsoring terrorism on its soil through disaffected Pathans and Balochis. It wishes to do so to dilute the international focus on Pakistani terror in its neighbourhood. The entire purpose of the Jadhav abduction and putting him on display was to convince global opinion that India was undertaking terrorist acts against Pakistan, but it has simply made no headway in this propaganda exercise. Now, another attempt has begun with direct allegations that Yusuf made in the interview, including the charge that Indian representatives were in touch with the mastermind of the horrific Army Public School terrorist attack in 2014. This particular reference is an attempt to shift attention from the Mumbai attack and Pakistan’s continuing sponsorship of terrorism through tanzeems like the LeT and JeM that are based on its soil.

Pakistan’s continuing anguish is that except for China, all major countries have not been bothered by the J&K constitutional changes, and except for Turkey and Malaysia, no important Islamic country has spoken against it. The Arab peninsular states have ignored Pakistan’s desire for a meeting of the Organisation of Islamic Cooperation meeting at the foreign minister level on Kashmir. The administrative steps that were taken in J&K after August 5, 2019, attracted adverse attention, but now that too has muted. It is unlikely that any country will pay attention to the wild assertion that the Kashmir situation is imploding. The Pakistani establishment has succeeded only in instilling this belief in its country’s public for its own institutional interests and to divert attention from the sharpening of the domestic political situation.

Pakistan’s claim that it has fulfilled ICJ’s order to ensure that consular access is given to India to meet Jadhav is simply wrong. The meetings of consular officials and their nationals in a foreign state’s custody cannot be monitored by officials of the foreign state. If they are, the purpose of giving an opportunity to the national to be able to talk to his government’s representatives freely and in confidence is lost. The Jadhav case is before the Islamabad High Court, but its judges too have not ordered such access, despite all their attempts to show that they are acting impartially. It is impossible to believe that any Pakistani court can show the courage to do justice in the Jadhav case; certainly, the Pakistani judiciary’s track record is largely one of bending before its country’s establishment.

Pakistan is taking comfort in the unhappiness in some liberal global circles at the social and cultural direction of the Modi government. It obviously wishes to align the liberals’ criticism to its own stands on the J&K issue, and also on terrorism. What Pakistan is overlooking is that there is, to put it mildly, scepticism about its internal and external policy choices. This will be enhanced by it giving a clean chit to China on that country’s treatment of Uighur Muslims.

As long as Pakistan does not change course fundamentally, it has no real future. The Yusuf interview is a confirmation that the Pakistani establishment is interested in theatre, not popular welfare or in normalising relations with India, despite his repeated claims that it seeks peace with India.