What Tsai win means to China

Taiwan is not willing to be assimilated, at least politically, into the motherland 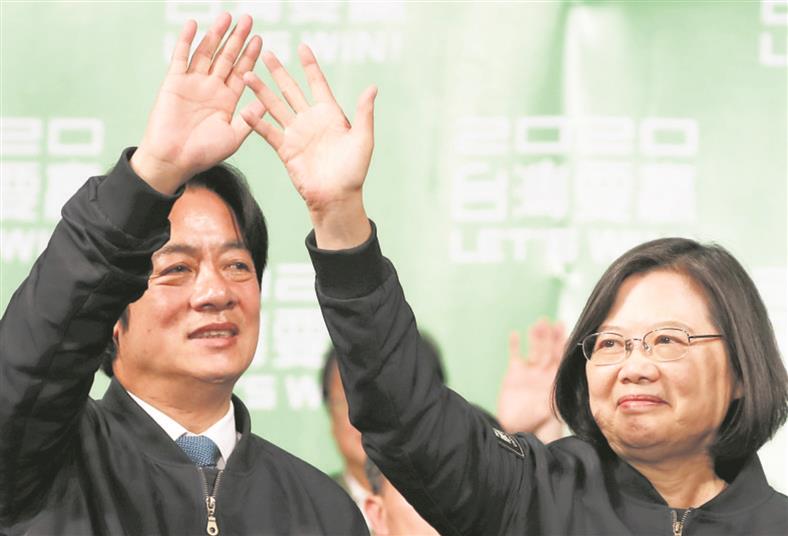 STANDING STRONG: President Tsai has made it clear that conditions China has been seeking to impose were entirely unacceptable to Taiwan. THE re-election victory of President Tsai Ing-wen of Taiwan has many complex messages. In an important way, it reflects an impact of the Hong Kong agitation. On the one hand, it reflects a massive victory for the Democratic Progressive Party, which flirts with the notion of independence, but on the other, it also reveals the strength of the forces that support a reunification with China.

The Tsai campaign focused on the issues of sovereignty and identity and was able to prevail against the China-leaning Kuomintang (KMT) which adopted a populist approach that had brought it handsome dividends in the local elections of 2018. Looked at any way, the election outcome was a rebuke to China. The voter turnout of 75% was 10% higher than the one in 2016. There is little doubt that the developments in Hong Kong propelled the younger voters to cast their votes in larger numbers. But one should not over-interpret the outcome.

Tsai won with 8.17 million votes, representing 57.13% of the electorate. In that sense, her victory was decisive. Her Democratic Progressive Party (DPP) also retained its majority in the 113 seat legislature. On the other hand, the losing KMT candidate Han Kuo-yu got 5.5 million votes (39%) as compared to the 3.8 million won by Eric Chu, the losing KMT candidate in 2016. However, the KMT gained three seats in the legislature while the DPP lost seven. A third candidate, James Soong of the People’s First Party (PFP), got 6.08 lakh or 4% of the votes.

The DPP now holds 61 seats in the legislature while the KMT has 38 seats. The DPP lost seven seats as compared to 2016, while the KMT gained three. The Taiwan People’s Party (TPP) won five seats, the New Power Party (NPP) three and the Taiwan Statebuilding Party (TSP) one seat. Neither the New Party nor the PFP won any seats since the remaining five seats were won by the independents.

Clearly then, despite the clear mandate for Tsai, the KMT retains its relevance to the country’s politics. In addition, the emergence of newer political parties and independents signals a growing sophistication of the Taiwanese democracy.

In an ideal situation, China should gracefully accept the verdict and look for a Xi-Tsai meeting. But that’s not the way Beijing sees things and we are likely to see more tension in the cross-Straits relationship.

In the commentary following the election, Xinhua, the official Chinese news agency, charged that Tsai and her party had used all kinds of dirty tactics and intimidation to win. Besides, it alleged that anti-China politically forces in the West openly intervened in the elections ‘to prevent the two sides of the Taiwan Strait from getting closer’. Its pithy analysis of the outcome was that it was a ‘temporary countercurrent’ which was ‘just a bubble under the tide of times’. In other words, the election outcome will not alter the trend of history that would lead to reunification.

In her victory statement, President Tsai said the bottom line of her administration had been Taiwan’s sovereignty, even while maintaining ‘healthy exchanges with China’. She said Taiwan had maintained a ‘non-provocative, non-adventurist’ approach towards China.

She made it clear that the increasing pressure on the one country, two systems model China has been seeking to impose were conditions that were entirely unacceptable to Taiwan. If China intended to unilaterally change the ‘cross strait status quo’, Taiwan would have to continue strengthening ‘our democratic defence mechanisms’ as well as ‘establish national defence capabilities’ that can secure Taiwan.

In recent years, ties between Taipei and New Delhi have shown steady improvement. India’s Act East Policy has coincided with Taiwan’s New Southbound Policy and the years since 2016 have seen greater contact between the two governments. Taiwan has opened four trade offices in India in recent years and the two-way trade stands at around $8 billion while its investment in India is around $1.5 billion, mainly in electronics and manufacturing. Despite the failure of the Foxconn investment, India cannot be unaware that Taiwan is a powerhouse of manufacturing, especially computer chips. It is also an important destination for Indian students wanting to study Chinese language.

India needs to navigate the complex politics of the region carefully. As it is, Beijing is chary of India’s participation in the Quad and the US-led Indo-Pacific strategy. And there is no denying that this is linked to moderating Chinese behaviour in the western Pacific region.

Overall, the lessons of the elections should be obvious. Taiwan is not willing to be assimilated, at least politically, into the Chinese motherland. Beijing needs to reflect on the manner in which it has been relentlessly reducing the independent political space in Hong Kong and seeking the same process for Taiwan.

In the recent elections, despite tough talk, it could not do anything more against Taiwan because it was also on the verge of signing the Phase I trade deal with the US. Further, by now, it should know that heavy-handed tactics would only recoil as they did against the KMT in the election.

President Tsai cannot but be aware of the sensitive situation Taiwan confronts with a China whose economy is under stress and where the ruling CPC is doubling down on its authoritarian rule and adopting a hyper-nationalistic posture. Her style will be to continue on a low-key gradualist political approach which will expand Taiwan’s international space, despite countermeasures by Beijing, taking advantage of the geopolitical currents that are swirling around the region.