Face-off between Imran Khan and Gen Bajwa over ISI leadership 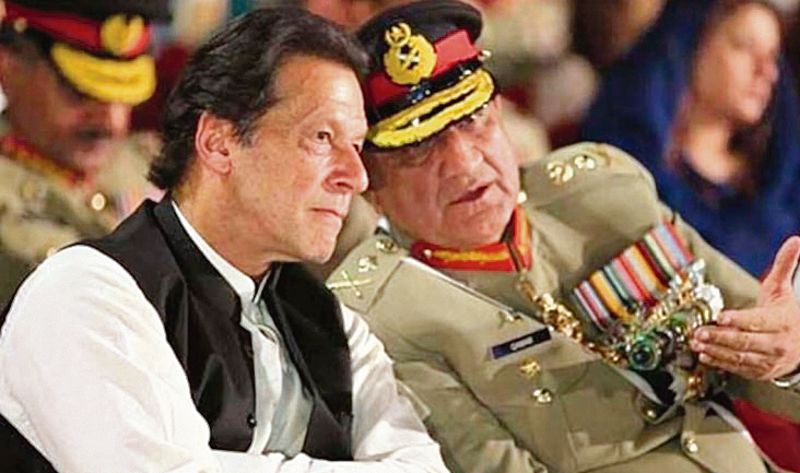 Showdown: Imran Khan has got caught in a quandary of his own making. Twitter

My colleagues and I were relaxing in Islamabad on October 12, 1999, after the Kargil conflict had ended. One expected that internal battles between the Musharraf-led army establishment and PM Nawaz Sharif would soon become more intense. But, we were all in for a rude shock. Driving past the main building of Pakistan Television (PTV), I ran across an incredible and unforgettable sight. Soldiers of the Islamabad-based 111 Brigade were climbing walls of the PTV to capture the building. I headed back to the High Commission to join my colleagues to ascertain what was happening. The PMO and the External Affairs Ministry in New Delhi were informed that an army coup was underway in Islamabad.

Imran had neither the means nor the courage to change the transfer orders. If he had, there would have been a constitutional crisis, with prospects of yet another coup.

Within half an hour thereafter, we learnt that when Musharraf was on his way back to Islamabad from Colombo on a PIA flight, the Air Traffic Control advised the pilot that he could not land in Pakistan. He could seek a landing elsewhere, including in India! In the meantime, PM Sharif sacked Musharraf and had Lt Gen Ziauddin Bhatt, the ISI chief, appointed to replace him. But, other senior Generals, led by the Chief of General Staff, Lt Gen Aziz Khan, seized control of the capital. They arrested Sharif and others colluding with him, just before Musharraf’s flight from Colombo landed in Rawalpindi. This was followed by a period of ruthless martial law. Sharif, meanwhile, faced the prospect of being hanged for sedition. He was saved following some quiet intervention by the Saudi monarchy.

Pakistan again landed itself in a mess, both economically and politically, in the recent past, thanks to the exertions of PM Imran Khan, who has bent backwards to encourage the ISI continue messing around in the country’s internal politics. His closest ally in his efforts to undermine the opposition has been the ISI chief, Lt Gen Faiz Hameed. The ISI chief was the centre of international media attention on the day the Taliban was taking over charge in Kabul. He, in fact, ensured that he was the centre of worldwide media attention, even as the formation of the new government was accompanied by the sidelining of moderate leaders like Abdul Ghani Baradar and Sher Mohammed Abbas Stanikzai, who fled to Dubai after expressing fears about his life.

Even as Afghanistan is descending into chaos, it is finding that friends and foes alike are averse to having formal diplomatic ties with it, because of its brutal treatment of women. It is, however, possible and even likely, that countries like Pakistan, China and Russia will change their stance, and establish diplomatic relations, with the Taliban government. There are also a large number of OECD countries which would link diplomatic relations with meaningful changes on essential issues, like the presence in Afghanistan of internationally designated terrorist groups like the Al-Qaeda and Islamic State. There is international condemnation of the Taliban’s suppression of women.

The real issue of concern in Pakistan has, however, been the growing rift between the army chief, Gen Qamar Javed Bajwa, and Imran Khan over the transfer of the present ISI chief, Lt General Faiz Hameed. General Bajwa used his prerogative for transferring Hameed as Corps Commander of Pakistani forces on the Afghan border. This could clear the decks for enabling Hameed to become the army chief when Bajwa retires in 2022. Bajwa also announced the appointment of the Corps Commander, Karachi, Lt Gen Nadeem Anjum, as the new ISI chief. Anjum will obviously not be as close a confidant of Imran Khan as the present incumbent. This could leave the none-too-popular Imran Khan in deep trouble in getting his present supporters to back him whenever he is threatened, politically.

Given the powers that ISI chiefs enjoy, Hameed has helped Imran Khan in dealing with moves of the opposition, aimed at embarrassing and unseating him. Imran Khan, therefore, wanted the ISI chief to continue in Islamabad, as the country moved towards national elections in 2023. Imran Khan had refused to sign the orders approving the transfer of the ISI chief and the appointment of Anjum as his successor. Imran Khan, however, had neither the means nor the courage to change the transfer orders. Pakistan could then have ended up in a constitutional crisis, with prospects of yet another coup. The judges in Pakistan’s Supreme Court would prefer to avoid getting drawn into this controversy. No military takeover has ever been rejected by the judiciary.

Imran Khan got caught in a quandary of his own making. While the US, its European allies and some others may have reservations about a military takeover, not many people in Pakistan would shed too many tears at Imran Khan’s departure. Imran Khan, however, was left with little choice. He could have made peace with Bajwa, and then lose the next election, which has to be held not later than October 12, 2023. Imran Khan would have had to sail into uncharted waters, if he chose to confront the army chief. Many of his own party’s MPs would have dumped him if he got into a confrontation with the army.

Bajwa had issued orders to the two Lieutenant Generals to take over their new posts. They were hardly likely to disobey their chief. Going to the court would have been risky for Imran Khan, as the court itself would not be enthusiastic about getting caught in the middle of a dispute between an unpopular PM and a quiet, but resolute army chief. In these circumstances, Imran Khan has finally accepted the demands of his army chief. He has lost face and exposed himself to ridicule. India, meanwhile, should keep in touch with Taliban leaders and offer, at a suitable time, relief supplies for the suffering Afghan people, while linking diplomatic recognition to democratic freedoms, particularly for Afghanistan’s women.