Why China is forced to improve ties with US : The Tribune India

Why China is forced to improve ties with US

Xi would have been upset about the continued sanctions being imposed by the US and its allies on the export of microchips to about 100 Chinese companies which would retard China’s progress in the strategic domain, besides Japan’s decision to term China as an ‘unprecedented strategic challenge’ and increase its defence spending to 2% of its GDP by 2027. 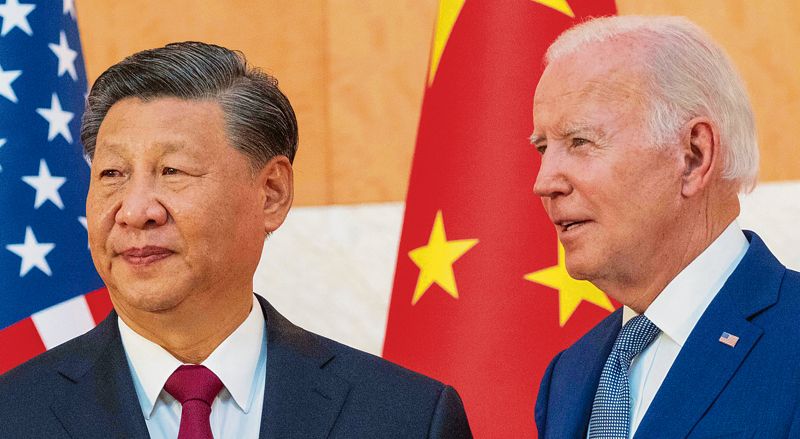 Olive branch: Xi Jinping (left) has taken several steps for improving relations with the US by lowering the rhetoric against Washington. AP

During the last three months, the image and standing of Chinese President Xi Jinping have weakened with widespread protests breaking out in November against his zero-Covid policy, after which he was forced to abandon it, resulting in waves of Covid-19 infections rampaging China.

Xi was forced to acknowledge popular criticism of his zero-Covid policy in his New Year address when he said, “In a big country, it is natural for different people to hold different views on the same issue.”

With the majority of the population getting infected due to Covid, deaths of a large number of elderly and other persons, losses suffered by middle-class people due to defaults by many property companies, and loss of jobs due to the closure of several companies, the discontent against Xi’s governance has risen considerably.

As the maintenance of domestic peace, stability and order is of the highest priority for him and the Chinese Communist Party’s (CCP) rule in the country, Xi has gotten hyperactive to thwart the criticism of his policies.

Reaching out to the USA and others in his New Year address, Xi avoided his pet word “reunification” of Taiwan with Mainland China and said, “The people on both sides of the Taiwan Strait are members of one family” and hoped that they would work together with “a unity of purpose to jointly foster lasting prosperity of the Chinese nation.”

Talking to different groups at home, Xi defended his zero-Covid policy, saying that it had “enabled China to withstand several rounds of virus mutations”, lowered the proportion of severe cases and the fatality rate to the greatest extent possible. Asking for more patience and forbearance as Covid wades through the rural areas, Xi said, “Tough challenges remain, but the light of hope is right in front of us. Perseverance means victory.”

8.5 lakh in 2022. This was the first decline after 1961 when China’s population had fallen due to Mao Zedong’s Great Leap Forward industrial policy failing because of floods and drought. China’s population is shrinking as the country’s rulers decided to follow the single-child policy in 1979 to overcome its vast poverty quickly without studying the long-term implications of the move.

According to Professor Yi Fuxian, a researcher based in the USA, China’s fertility rate has fallen to 1.3 per cent (the replacement rate for population is 2.1 per cent) and if the country can stabilise its fertility rate at 1.2 per cent, China’s population would drop to 1.07 billion in 2050 and 480 million by 2100. A declining population means a smaller workforce, older people with health and social welfare needs, reduced savings, manufacturing, exports and revenues for the government, weaker consumption and lower economic growth.

China has unveiled plans to introduce more robots and automation in manufacturing, agriculture, logistics, healthcare, energy and other sectors but the impact of this measure would be limited as the country already has 322 robots per 10,000 people, surpassing the USA and putting it in the fifth place in 2021, according to the World Robotics Report, 2022.

The other news which would have upset Xi includes continued sanctions being imposed by the USA and its allies on the export of microchips to about 100 Chinese companies which would retard China’s progress in the strategic domain, besides the decision of the Japanese government to term China as an “unprecedented strategic challenge” and increase its defence spending to 2 per cent of its GDP by 2027. Japan is to acquire counterstrike capabilities (aimed mainly against China and North Korea), including new missiles, technologies relating to unmanned systems, cyberspace, outer space, the electromagnetic spectrum and artificial intelligence.

The news about the rising India — the projections of Ernst and Young that the Indian economy could reach $26 trillion by 2046 and the decision of Apple to shift about 25 per cent of American cell phone manufacturing from China to India by 2025 — would not have pleased Xi as China has always aimed at containing India’s progress to assert its supremacy in the region. Xi would view it as another example of the Indo-US collusion aimed at weakening China’s economic power.

Xi has taken several steps to signal improved relations with the USA. Firstly, by lowering the rhetoric aimed against Washington and giving his concurrence for a meeting of the ministers in charge of foreign affairs, national security, finance, climate change and others. His ministers have put aside their wolf-warrior diplomacy and are now seeking meetings with their American counterparts. China is seeking stronger ties with Germany, France and Italy as these countries are taking a stance more independent of the USA towards China.

To signal the change and openness to global investment and market reforms, Xi sent Liu He, a vice-premier and his old Economic Adviser whom he had removed from the Politburo at the 20th Party Congress in October 2022, to represent China at the World Economic Forum in Davos as he is well known to big western companies.

At home, Xi has changed his earlier policies on the regulation of technology companies and tightening of credit to the real estate companies. Xi and his ministers are inviting foreign investors again to China, promising equal support to the private sector and more market reforms.

But the trust, outlook and confidence of the USA, many European, Asian and other countries and companies in Xi have been badly shaken due to his erratic and misguided policies. They think that the change in Xi’s approach and about-turn in policies is only tactical to ride out the present difficult economic environment. They would continue to put pressure on China to weaken its economic growth and hamper its technological rise to resist Xi’s aggression and hegemony.