The Pakistan army has been most confident of the sub-conventional or covert war dimension of its strategy and will continue its strong reliance on that. Another dimension of cyber war and propaganda is being strengthened now. Perception management has remained an integral part of its strategy not only against India but also towards its own people to garner legitimacy for the army’s overpowering stature and unreasonable actions. 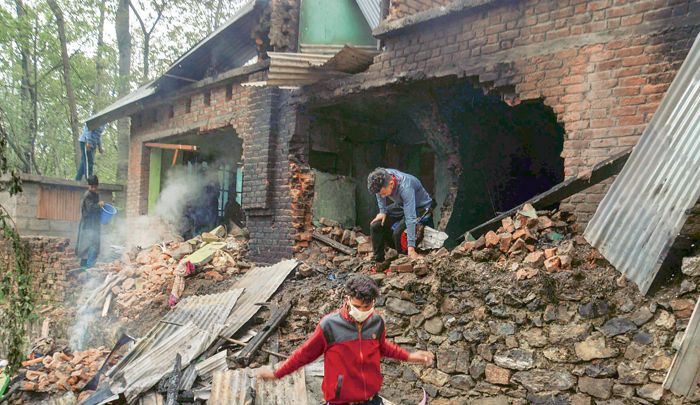 Covert strategy: 25-30 Pakistani terrorists infiltrated into the Valley in April.

While the world is engrossed in its fight against the global pandemic, Pakistan’s strategic assets do find this period as the optimal time to intensify its covert war strategy of ‘bleed India’. On May 3, in an overnight operation at Handwara in Jammu and Kashmir, the Indian security establishment lost five personnel fighting the Pakistan-sponsored terrorists. One of the two terrorists killed in the operation is identified as a top Lashkar-e-Taiba (LeT) commander, Haider, a Pakistani national. Reportedly, 25-30 terrorists have crossed the LoC and infiltrated into the Valley in April.

Pakistan-based terrorist groups have been upping their ante and in October last year, an unknown organisation in Kashmir, The Resistance Front (TRF), which is reportedly a front of Pak-sponsored LeT, made its debut in the competitive world of terrorism, and conducted a grenade attack at a street market in Srinagar city, wounding a few vendors. TRF has an active online presence and has conducted a series of attacks targeting the Indian forces. Pakistan has been on the Financial Action Task Force (FATF) grey list and under international pressure to act and curb terror financing channels. Thus, a need to have a new brand in the name of resistance and human rights was felt strongly by Islamabad to conduct and intensify the sub-conventional war in the Valley.

The terror attack is painful and frustrating but not surprising, given Pakistan’s long commitment to the sub-conventional war, and critical developments in the recent past. Pakistan has been exasperated after the revocation of Article 370 in the Valley. Pakistan’s much-expected anguish, reflected in its series of hate tweets, intense propaganda against the Modi government, claiming it as a government run on Nazi ideology, and intensified diplomatic offensive, highlighting the Kashmir issue at every possible international forum.

Imran Khan, who is in sync with the deep state’s strategic objectives and owes his victory in the 2018 elections to the Army chief, General Bajwa, has been highlighting purported Islamophobia — starting in his UN General Assembly speech in September 2019 — in an aggressive attempt to unite the Muslim states against India (for Kashmir). Pakistan’s all-weather ally China has been a supporter of Pakistan’s position on Kashmir and Beijing facilitated raising the Kashmir issue at the United Nations Security Council a multiple times. The threat of a nuclear war has also been repeatedly highlighted by Pakistan to attract the much-desired international attention on Kashmir in the last one year.

Pakistan’s efforts to intensify militancy in the Valley at this point are primarily due to four factors: n Conventional offensive is not feasible for Pakistan currently due to its mounting economic stress and now additional stress of the Covid crisis; n The US-Taliban agreement signed on February 29 has boosted Pakistan’s faith in the covert war strategy it pursued against Afghanistan. Pakistan has been acknowledged by Washington as a facilitator of the agreement and the Pakistan military is cherishing diplomatic dividends as well as Pentagon’s moderately altered stance towards Pakistan; n The Afghan Taliban, an ally of Pakistan, has gained legitimacy and strength in Kabul. This conveniently caters to Pakistan’s desire of gaining strategic depth and seeking control over Kabul, which would facilitate its designs against New Delhi; and n Pakistan got a four-month reprieve for meeting the FATF deadline to stop financing of terrorist groups. Islamabad feels it has the time and space to conduct militancy against India without the pressure of being questioned in the FATF (at least not too soon!). Traditionally, Pakistan has been following a three-dimensional strategy against India:

Conventional level: Pakistan has tried hard to attain parity with India in terms of its military build-up. The military leadership in Pakistan has focused primarily on defence build-up and modernisation, highlighting the strategic threats in the region.

Sub-conventional level: Pakistan opted for the covert war option in 1947, when it launched its first aggression in the name of tribal revolt. The Pakistan military has pursued a covert war strategy with persistence over the last seven decades, although its tactics have been modified and have evolved. All the three wars initiated by Pakistan have been started in a covert manner.

Nuclear level: Nuclear weapons are perceived as providing a foolproof guarantee of its sovereignty and survivability against India. After the acquisition of nuclear weapons (in 1987), Pakistan is more confident of its strategy of ‘offensive-defence’. Nuclear weapons have been used as an umbrella by the Pakistani leadership to pursue terrorism as a foreign policy tool. The belief in the nuclear weapons has grown with its adoption of the ‘first use’ doctrine and, projection of a low nuclear threshold. The Balakot strikes did challenge Islamabad’s nuclear posture to some extent.

It is pertinent to ask how this strategy towards India will evolve in the coming time. The Pakistan army has been most confident of the sub-conventional or covert war dimension of its strategy and will continue its strong reliance on that.

A fourth dimension of cyber war and propaganda is being strengthened and intensified now.

Cyber war and propaganda: Pakistan has intensified the propaganda war, which is a low-cost option and is felt to be a potent weapon to shape its anti-India narrative. Perception management has remained an integral part of the military’s strategy not only against India, and Afghanistan, but also within the state towards its own people to garner support and legitimacy for the army’s overpowering stature and unreasonable actions. While Imran Khan used the social media for his anti-Modi agenda after Balakot strikes and then after revocation of Article 370, official reports suggest 7,000 accounts on social media are being operated from Pakistan for a campaign aimed at influencing New Delhi’s relations with Gulf countries.

While Islamabad’s denial for its role in the proxy war is expected, its revised strategy against India aims at intensifying militancy in the Valley— under a new brand — and launching an aggressive cyber war to intensify propaganda and highlight Islamophobia.