Women on the march in Pak

Amid hostility, the initiative is raising the pitch for gender equality 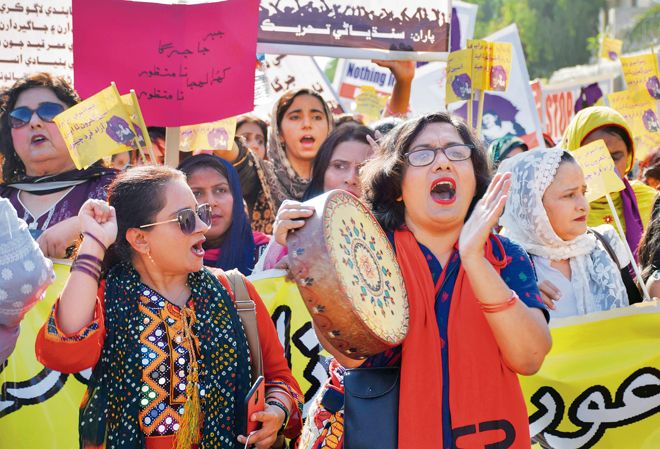 ON March 8, ‘Aurat March’ was held in major cities in Pakistan to observe the International Women’s Day. Such a march was started in 2018 in Karachi and extended to other cities in 2019. The 15-point manifesto of the march revolved around khudmukhtari (independence) of women. Hence, the demands raised were equal rights, access to education, economic justice, inclusion, justice for violence against women, ending of forced conversions etc. The women’s rights movement in Pakistan has come a long way from the days of General Zia-ul-Haq when rape victims were often jailed for adultery if they could not produce four male witnesses.

Appeals for restrictions on the march were filed in the Islamabad High Court where the Chief Justice, rejecting the petitions, held that words used in Aurat March slogans ‘should not be given meanings according to the mind-set of a certain section of society... contrary to the explanation given by the proponents of the march.’ In the Lahore High Court, the petition claimed that the march was ‘anti-state’ and an ‘un-Islamic’ activity, against ‘the very norms of Islam’ spreading vulgarity and hatred and the slogans intended to mislead women.

The right-wing religious parties came out strongly in opposition, accusing women activists of spreading ‘obscenity’ and ‘vulgarity’. According to Jamiat Ulema-e-Islam-Fazl (JUI-F), calling for women’s autonomy over their bodies was in opposition to the essence of Islam and thereby unacceptable in an Islamic republic. Its leader, Maulana Fazlur Rehman, openly threatened participants and exhorted his supporters to stop the march regardless of any ‘sacrifice’ that this might entail. The Jamia Hafsa, a women’s madrasa affiliated with Islamabad’s infamous Lal Masjid, defaced a mural in Islamabad designed in connection with the rally and organised their own Haya march.

Legally, Pakistan has enacted several laws to bolster women’s rights. These include the National Policy for Development and Empowerment of Women, Protection against Harassment of Women at Workplace Act, Gender Equality Policy Frameworks and Women Empowerment Packages and Initiatives. Pakistan also has a National Commission on the Status of Women to monitor the state’s response to the progress of women. Despite the legal framework, there continues to be a huge gap between laws and their implementation.

The World Economic Forum (WEF) has ranked Pakistan 151st out of 153 countries with 56 per cent gender gap on the Global Gender Gap Index report of 2020, compared to 112th out of 115 in 2006. The WEF placed Pakistan at 150th in economic participation and opportunities, 143rd in educational attainment, 149th in health and survival and 93rd in political empowerment. According to a former central bank governor, only 7 per cent of women in Pakistan had access to financial inclusion services and just 1 per cent of the total economic empowerment programmes in Pakistan were for women. Less than half of the women are literate compared with 70 per cent men. Over 70 rape cases were reported in the first 60 days of 2020 in Lahore alone.

Against this backdrop, empowering women in Pakistan is clearly a long haul. It would perhaps be optimisitc to view the march as creating awareness among women regarding their rights as well as providing a platform to garner international attention for their struggle. Likewise, it is unlikely that a march on one day in a year would change much.

As The News put it editorially: “We have talked many times of the intense hypocrisy of a society that does not speak out when a little girl is raped, a woman killed for so-called ‘honour’ or a young girl’s face burnt with acid — but which has a huge issue every time women try to assert their rights. That a woman’s right to have control over herself, her body and her soul can lead to such violent thoughts and reactions from those who fancy themselves their saviours should be cause for immense concern.”

However, the march is gradually becoming the new face of the women’s movement in Pakistan. This is huge considering the conservative society that Pakistan is. The strong backlash against the movement is precisely because it mirrored the prevalant prejudices against women in society.

The fact that within just three years, the march has attracted such hostility would suggest that it has touched a raw nerve of its opponents. If it continues to gather momentum in the years ahead, the Aurat March has the potential of becoming a strong vehicle for the outpouring of the demand for justice and equality for women in Pakistan.