The fact that the Women’s Reservation Bill of 1996 is yet to see enactment is indicative of the fact that women are still up against tremendous political resistance. Their due share in politics would alone enable them to pass relevant women-oriented laws, and even more importantly, see to their implementation. It is also significant that not many women get fielded by the political parties. 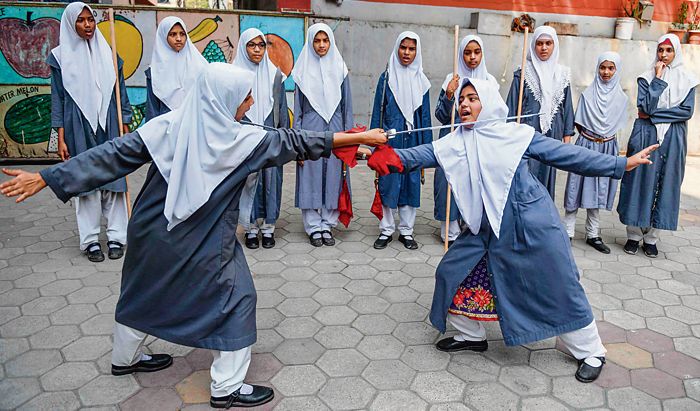 Girls are no less: Gender sensitisation is important to end inequalities.

We are celebrating yet another International Women’s Day on March 8. As we commemorate it, let us recall women’s rights, achievements and the challenges they face today. Theoretically, they have a long list of rights, but are they followed in practice?

The efforts of women and their very significant contribution to the freedom struggle got them the right to vote and equality with men in the Constitution of India. This was followed by a series of Acts, promoting the cause of women in the 50s and early 60s which legalised inter-caste and interfaith marriages, made child marriage punishable and abortion illegal, outlawed polygamy, conferred the equal right of divorce on both men and women, gave inheritance rights to women in the patrilineal property and prohibited giving of dowry.

Despite these and many other laws, women continue to face atrocities, like female infanticide and sex-selective abortion, child marriage, honour killings, acid-throwing, violence that domestic innature, rape, dowry deaths, caste inhumanities, educational inequality, workforce participation, land and property rights, and gender discrimination of various kinds in almost all fields. But the implementation of laws has left much to be desired.

A most glaring inequality is in the political participation of women. Politically, the 73rd and 74th Amendments of the Indian Constitution in 1993, providing for 33 per cent reservation for women in rural and urban local bodies, i.e. panchayats and municipalities, were a giant stride in the empowerment of women. There are calculated to be 1.2 million elected women representatives in the institutions of local governance in rural India.

However, all attempts to pass similar Bills providing reservations for women in the Lok Sabha and the state legislative assemblies continue to face several hurdles due to the opposition by many parliamentarians to such an accommodation. The fact that the Women’s Reservation Bill of 1996 is yet to see enactment is indicative of the fact that women are still up against tremendous political resistance. Their due share in politics would alone enable them to pass relevant women-oriented laws and, even more importantly, see to their implementation.

It is also significant that not many women get fielded by the political parties. In the recent 2019 elections, out of the 8,000-plus candidates that contested the 545 seats of Lok Sabha, only 700-plus were women and out of them, only 78 were elected. In the Rajya Sabha, currently, there are only 25 women out of a total of 225 members and only five women out of 64 occupy ministerial positions in the Union Council of Ministers. Clearly, equal representation is far from reality. In the judiciary, there are only three sitting women judges out of the total 34 in the Supreme Court and there are only 73 women judges out of the 670 judges serving in various high courts. The above figures are sufficient to underline the unequal realism.

The women’s movement in the past looked towards the state for welfare programmes and made demands for positive discrimination for women. However, at the same time, women have been wary of state inaction and on various occasions have felt let down. The government’s recent negative stand on introducing women officers in the Army is a case in point. The Supreme Court’s intervention saved the day for women. Its declaration that the ‘physiological features of a woman have no significance to her equal entitlements under the Constitution’ tore through the notion being upheld by the state that women are the ‘weaker sex’ and may not be able to undertake tasks that are ‘too arduous’ for them.

It is clear that being equal to their male counterparts remains a far cry for the Indian women. Not only are they marginal as public figures, an average Indian woman can hardly call the shots at home or outside.

A gradual change is now visible in modern-day India, and this can be seen in large cities. Women have found employment in fields that have been traditionally considered male dominated. But though they have shone in every field, they face discrimination at every level of employment or promotion. In rural India, things continue to be discriminatory. Moreover, issues of the women’s movement have become more complex with the growing communalism, globalisation and militarism.

So, what has the women’s movement achieved? The major achievement is of having brought women’s issues centre-stage. Wome’s issues are taken up not only by political parties but also various women’s organisations, NGOs, mahila mandals, self-help groups, village-based groups as also college cells and initiatives by individual women. The rising interest in women’s issues has got reflected in education as well. Women’s studies and gender studies is an achievement of the movement. There are 163 Women’s Studies Centres. A woman’s perspective in the studies has helped evolve consciousness about matters relating to them, leading to receptiveness, mobilisation, and defining capacities in the women’s movement and providing a strong base on which to build for the future.

Today, the thrust is directed more towards equality. These are focused on equal social, political and economic opportunities, as well as equal rights and legal protections for women in the Indian society. Achieving equality would mean empowering women. Sociologist Dhruba Hazarika has rightly said that ‘empowerment of women means equipping them to be economically independent, self-reliant, in addition to providing positive self-esteem to face any difficult situation.’

To achieve this, it is important and crucial to sensitise men at a young age so they become an integral part in bringing about a transformation for women in society. When men start respecting women and accepting them as equals, a lot of gender-based inequalities will reduce considerably. Gender sensitisation initiatives are, therefore, very important. Educating children from an early age about the importance of gender equality could be a meaningful start in that direction.

Even though the women’s movement continues to face numerous hurdles and challenges, it has not deterred women’s confidence and enthusiasm in bringing about a powerful social change. They are forging a new path toward equality and achieving socio-political and economic empowerment.