The lowering of tensions between the USA and China encouraged several American allies to seek individual meetings with Xi. Those with a close relationship with the USA and who have spoken harshly against Beijing — such as the UK — were denied a meeting. Xi chided Canadian PM Trudeau for leaking details of their discussion to the media, saying that it was not the way the conversation was conducted. 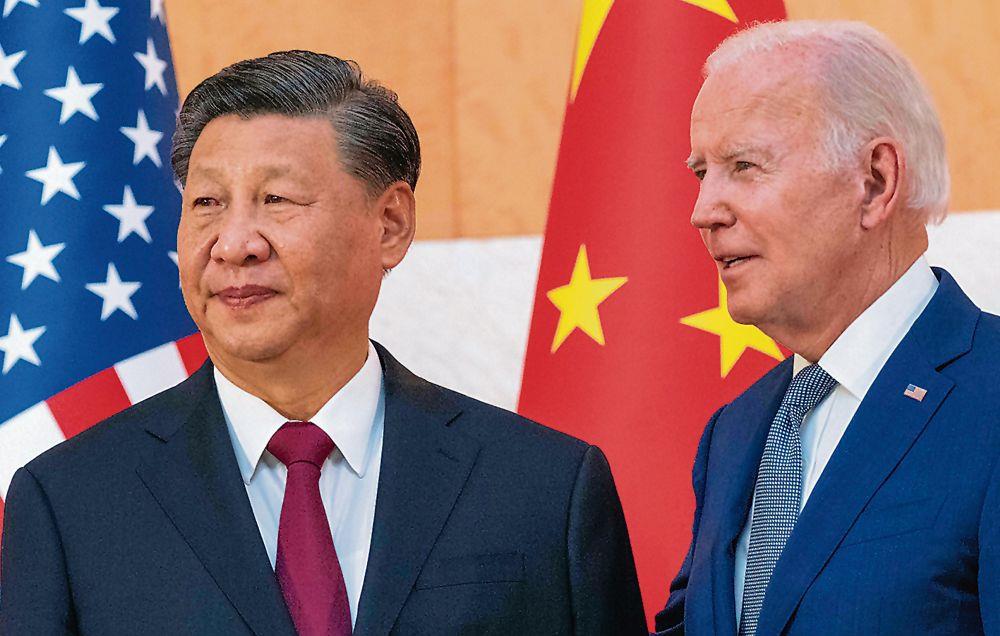 After three years of isolation, Chinese President Xi Jinping attended the G-20 summit at Bali in Indonesia recently. Xi was brimming with confidence after having got an unprecedented third term as President and having filled all important positions in the top party organs with his favourites. US President Joe Biden, too, was emboldened by the Democrats having secured a majority in the Senate and a large number of seats in the House.

In their first in-person meeting on November 14 lasting three hours, Biden made four important points: the USA would continue to compete vigorously with China but the “competition should not veer into conflict” and, for this, the two countries should maintain “open lines of communication.” The USA maintains its one-China policy, opposes any unilateral change to Taiwan, the “world has an interest in the maintenance of peace and stability in the Taiwan Strait” and the broader region. Biden raised concerns about China's non-market economic practices which harm the USA and other countries. Also concerned about North Korea’s provocative behaviour, he said that it should act responsibly and underscored “the USA’s ironclad commitment” to defending its Indo-Pacific allies.

As per the Chinese readout of the meeting, Biden reiterated five noes: a stable and prosperous China is good for the USA, it does not seek to change China, nor does it seek a new Cold War or revitalise its alliances against China, does not support two Chinas or one China and one Taiwan, does not seek conflict with China or decoupling from China. Xi said that the Taiwan question was at the “very core of China's core interests” and the first red line that the USA must not cross.

American Secretary of State Anthony Blinken would visit China to follow up on these discussions. Chinese Foreign Minister Wang Yi called the Bali meeting as a “signal of a new starting point”, which would prevent bilateral relations from “getting derailed”. Some former US officials were less exuberant, saying that the meeting would help ease tensions and manage areas of friction but were unsure if either side would yield on the underlying issues, ie the US tariffs on imports from China and sanctions against transfer of sensitive technologies to China and China's unfair economic policies and aggression against its neighbours.

The lowering of tensions between the USA and China encouraged several US allies to seek individual meetings with Xi. Those with a close relationship with the USA and who have spoken harshly against Beijing — such as the UK — were denied a meeting. Xi chided Canadian PM Justin Trudeau for leaking details of their discussion to the media, saying that it was not the way the conversation was conducted. Canada should return to a “rational and pragmatic track to view China objectively and fairly.” Xi refused to give any assurance to Australian PM Anthony Albanese about the lifting of punitive sanctions against the export of Australian coal, beef and barley to China and hoped that Australia would provide a sound business environment for the Chinese companies to operate (reference to the banning of Huawei by Australia in 2018 from its 5G network).

In the meeting with French President Emmanuel Macron, Spanish PM Sanchez and Netherlands PM Mark Rutte, Xi hoped that these countries would encourage the EU to stay committed to an “independent and positive” China policy (instead of toeing the US line) and stable and sound China-Europe ties and jointly uphold true multilateralism. Xi met most European leaders one to one, but European Council President Charles Michel and European Commission chief Ursula von der Leyen could not get face time with him.

Xi told the South Korean President that South Korea and China should deepen cooperation in high-tech manufacturing (China does not want South Korea, Japan and the Netherlands to join the US Chip Alliance against her), big data and green economy. In regard to Japanese PM Kishida’s request for the maintenance of peace and stability in the Taiwan Strait, Xi told him that China would not accept any interference on the Taiwan issue. The two leaders reached a five-point consensus that China and Japan should be “partners, not threats”. They agreed to hold a new round of the High-Level Economic Dialogue and strengthen cooperation in energy conservation, healthcare and the rehabilitation of old age people.

With India being the incoming G-20 Chair, PM Modi exchanged courtesies with Xi without seeking a meeting. India played an essential role in negotiating the G20 Declaration, which was applauded by the US White House Press Secretary and others.

China was happy with the consensus achieved in the G-20 Declaration on food and energy security, climate change, fight against Covid-19 pandemic, digital economy and anti-corruption efforts, saying that several of its proposals had been incorporated. It was piqued at the attempts of the Western countries to use a geopolitical crisis (Ukraine conflict) to sabotage the unity of the international community.

Xi's personal diplomacy may help in alleviating tensions in China's relations with the USA and its allies but it is unlikely to resolve the underlying differences, given that these countries regard China as their main competitor and the USA would push them hard to follow its policies on denial of sensitive technologies and allow the Chinese companies to operate in security-prone sectors. Also, will China cease its aggressive violations of the disputed territories shared with the ASEAN countries, Japan, India and Taiwan?

The Biden administration is unlikely to slow down its strengthening of Taiwan's defences or prevent the visits of the US congressmen to Taiwan, which would provoke Beijing. Without progress in these areas, China would be lukewarm in helping the USA on the North Korean, Iran or multilateral issues, like the pandemic control, climate change, drug trafficking and energy and food crises.

Given that the US-China rivalry for global supremacy will continue over a long time (till either of them gives up, reckoning the cost too high), it is useful that effective mechanisms of communication exist between them to manage differences and avoid conflict.