The Inner Mongolian government mandated that schools must use Mandarin, not Mongolian, as the language of instruction. The Education Department claimed the “textbooks reflect the will of the Communist Party and the State”. The policy triggered widespread resistance and protests. People were worried that the Mongolian language and culture will be extinguished as a consequence of these policies. 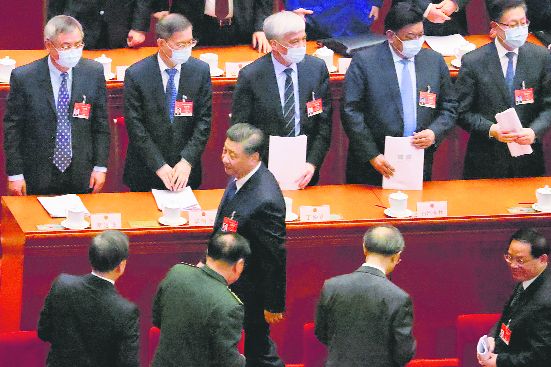 New ‘red’ era: Ignoring the human rights of ethnic minorities, China is on a mission to assimilate them into the Han mainstream. Reuters

Wary of efforts by the US and the West to bring about the collapse of the Chinese Communist Party (CCP), especially following the rapid deterioration in Sino-US ties, China’s President Xi Jinping has increasingly focussed on promoting nationalism and fortifying the CCP to ensure its monopoly on power. Disconcerting memories of the disintegration of the erstwhile Soviet Union and collapse of its communist party still remain sharply etched in the CCP’s collective memory.

Aware of the potential of hostile powers to fan discontent among the ethnic minorities residing in China’s border provinces — a pointer is the attention that Beijing pays to Nepal —Xi is trying to blend race, the party and the nation. A new “Red Gene” campaign has been launched in the army among cadres and students. Nationalism now goes hand in hand with the emphasis on the Chinese communist ideology.

Ignoring international criticism about the violations of human rights of China’s ethnic minorities, Xi told delegates from Inner Mongolia at the plenary sessions of the National People’s Congress (NPC) and Chinese People’s Political Consultative Conference (CPPCC), which ended on March 11, that “cultural identity is the deepest form of identity. It is also the root and soul of ethnic unity and harmony.”

He directed them to use “solid and meticulous efforts” to achieve ethnic unity and ensure that standard Chinese and State-compiled textbooks are adopted in schools and colleges. All young people in Inner Mongolia should, he said, understand the CCP’s policies and revolutionary heritage.

Within days, Politburo Standing Committee member and CPPCC chairman Wang Yang travelled to the restive Xinjiang-Uyghur Autonomous Region. Visiting six major cities in six days, he exhorted cadres to implement the party’s policies on ‘governing Xinjiang for the new era’, ensure that Islam in Xinjiang adapts to the socialist society, and cement the sense of community for the Chinese nation. He urged greater efforts to research Xinjiang’s history and promote Mandarin.

Recognising language as the key to a people retaining their culture, traditions and history, the CCP’s United Front Work Department (UFWD), which formulates and implements rules concerning non-CCP entities and China’s ethnic minorities, has been focussing on replacing ethnic languages in schools in ethnic minority areas with Mandarin.

Efforts at assimilating ethnic minorities into the Han mainstream include sending young students to the Chinese mainland for education. Thousands of Tibetans and Uyghurs have been sent since 2015. Many stay for decades at these educational institutions with the more recent arrivals imbibing “Xi Jinping’s thoughts on socialism with Chinese characteristics in the new era!”

While the effort has been pushed in varying degrees in the Tibet and Xinjiang Autonomous Regions, the study of Mandarin is being enforced since last year in the Inner Mongolia Autonomous Region too.

In August 2020, the Inner Mongolian government mandated that primary and secondary schools must use Mandarin, not Mongolian, as the language of instruction. Hou Yuan, then Director of the Education Department, claimed the “textbooks reflect the will of the Communist Party and the State.”

The policy triggered widespread resistance with more than 300,000 students staging protests in the Inner Mongolian capital of Hohhot. Policemen and government employees also joined. People were worried that the Mongolian language and culture will be extinguished as a consequence of these policies. On January 20 this year, Director of the NPC Legal Affairs Committee Shen Chungyao announced that schools in “minority areas” were no longer allowed to teach their own languages and that such education is “unconstitutional”.

The UFWD has simultaneously steadily sought to undermine the religious beliefs of ethnic minorities and superimpose the Chinese Han culture. Indicating that tough policies for accelerating their assimilation would be implemented, 66-year-old Han cadre Chen Xiaojiang was appointed to head the National Ethnic Affairs Commission in December 2020.

His appointment broke a tradition followed since 1954 of appointing a member of an ethnic minority group to head the body. The change comes in the wake of the National Ethnic Affairs Commission being transferred from under government to direct party control in 2018. It is now under the UFWD.

In January 2021, the UFWD published new rules asserting that the Han and ethnic minorities are a part of a “common community with a common destiny.”

At a national meeting of UFWD directors in Beijing on January 18, CPPCC Chairman Wang Yang focussed on ethnic minorities and religious affairs and the need to hasten the process of assimilation. He emphasised: “We need to mobilise all active factors that we can mobilise.”

The Inner Mongolia Autonomous Region’s Education Department pushed ahead to suppress Mongol culture and announced a ban on textbooks like ‘Inner Mongolia History and Culture’ and ‘Mongolian History’ from spring this year.

The effects of China’s effort to amend history and deny the Mongolian people their culture have also been felt abroad. The Musée d'histoire de Nantes was compelled to postpone its exhibition on the history of Genghis Khan and the Mongolian empire titled ‘Son of the sky and steppes: Genghis Khan and the birth of an empire’, which was scheduled to open in October 2020, because of the Chinese government’s objections to terms like “Genghis Khan”, “empire” and “Mongolian”.

While the CCP persists with efforts to persuade Tibetans, Buddhists and the Dalai Lama to recognise its role in selecting the Dalai Lama’s reincarnation, there has been a visible intensification in efforts at ‘sinicisation’of religion and ‘education’ of religious personages in Tibet and Xinjiang. It is apparent that the CCP’s efforts to assimilate ethnic minorities into the Han national mainstream have accelerated from this year.