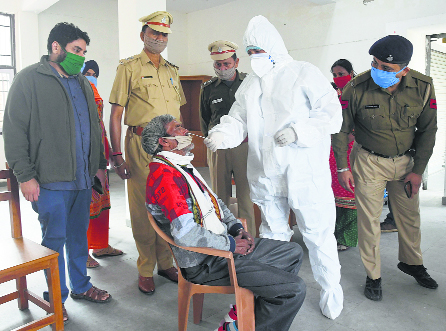 A health worker collects a sample of a prisoner for the Covid test near Model Jail in Chandigarh on Monday. Vicky

As many as 40 prisoners reported at the Model Jail premises and were tested using the rapid antigen test during the process of readmission of prisoners who had been released on special parole and special interim bail due to the Covid pandemic eight months ago.

All prisoners tested negative and have been shifted into the special barracks set up on the jail premises. The next batch of prisoners will return on November 22. Undertrial prisoners will return to the prison from December 12. The prison authorities, the Department of Health and the District Legal Services Authority, UT, had made the necessary arrangements. A health team was present and the rapid antigen test of prisoners returning from special parole was done outside the jail at Gate No. 1.

Only those prisoners were readmitted to the jail whose rapid antigen test for Covid-19 came negative. Officials said special barracks had been set up for a 10-day quarantine of prisoners.