Australia, so far, has recorded about 27,800 novel coronavirus infections and 906 deaths 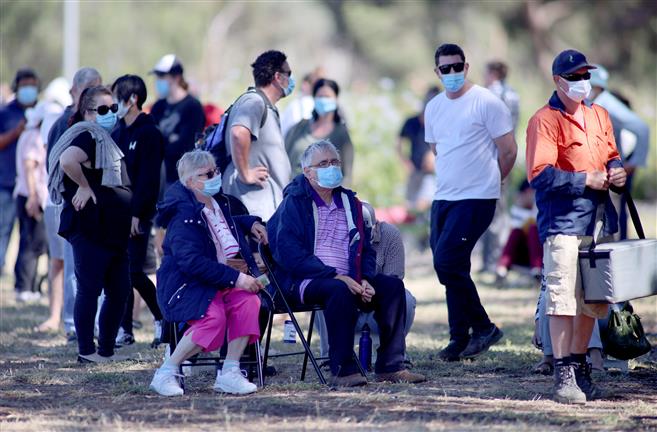 People are seen queuing outside a COVID-19 testing centre in Adelaide as Australia experiences an outbreak. AAP Image/via REUTERS

Australian authorities conducted mass tests on Tuesday and about 4,000 people were confined to quarantine in the hope of stifling a new cluster of cases of the novel coronavirus after hopes it had been largely eradicated.

The state of South Australia reimposed social distancing restrictions on Monday after detecting 21 cases of the coronavirus, most of which were acquired locally.

The cases were the first local transmissions of the virus in Australia in nine days.

South Australia Premier Steven Marshall said testing had identified five new cases in the past 24 hours while 14 people were suspected to be infected and were awaiting test results.

“We are not out of the woods. We are just at the beginning stages of dealing with this particular very nasty cluster,” Marshall told reporters in Adelaide.

Marshall said all cases could be traced back to an Australian who arrived in South Australia from overseas on November 2 and entered mandatory quarantine in a hotel.

Hotel workers were believed to have contacted the virus after touching a surface contaminated with the virus, Marshall said.

Authorities fear the virus could have spread beyond hotel workers and their close contacts, prompting a mandate that confined about 4,000 people to their homes.

“This is a very, very worrying situation. I’m not going to underestimate the concern that I’ve got about this,” said Nicola Spurrier, South Australia’s chief public health officer.

Australia has recorded about 27,800 novel coronavirus infections and 906 deaths.

The bulk of the infections were in Victoria state, which forced nearly five million people into a stringent lockdown for more than 100 days after a surge in cases.

That outbreak has been contained, with Victoria recording no new cases for the past 16 days. Reuters