Beijing on alert after COVID-19 spike in neighbouring province; 9 million vaccinated in China 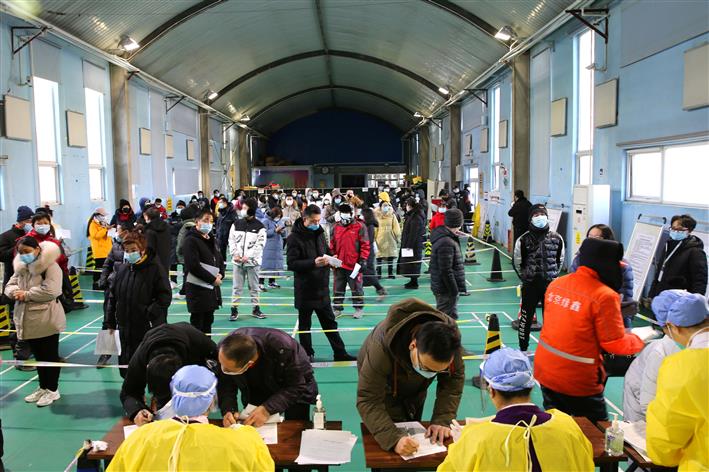 People line up to receive the vaccine against COVID-19 at a makeshift vaccination site inside a sports centre in Beijing's Haidian district, China. cnsphoto via REUTERS

Beijing has gone on an alert mode following a sudden spike in COVID-19 cases in the neighbouring Hebei province while China has administered nine million coronavirus vaccines so far in a stepped-up nationwide drive to contain the virus.

The National Health Commission (NHC) on Saturday reported 33 newly confirmed COVID-19 cases, of whom 17 were locally transmitted and the rest arrived from outside the mainland.

The rise of cases in Hebei sent Beijing on alert as the capital, besides housing the country’s top leaders, is getting ready for the annual Parliament session from March 5 during which over 5,000 legislators and advisers would converge.

Beijing is already dealing with a spurt in cases in some of the communities in the suburbs.

Alert levels in Beijing have gone up as Hebei reported 14 new locally-transmitted cases and 16 asymptomatic ones on Friday, the provincial health commission said on Saturday.

In view of the increase, Chinese Vice Premier Sun Chunlan rushed to the province on an inspection tour on the instructions of President Xi Jinping. Several local health officials have already been suspended.

Sun made the inspection tour from Wednesday to Friday, paying visits to a village in the province’s capital city of Shijiazhuang, a quarantine site, a local community, an epidemic control centre, and hospitals to learn about local conditions, state-run Xinhua news agency reported.

Shijiazhuang, meanwhile, has suspended all subway services to curb the spread of COVID-19.

As the cases increased, China stepped up vaccination. Over nine million doses of COVID-19 vaccines have been inoculated in China, Zeng Yixin, deputy head of the NHC, said.

Those administered vaccines included workers in the cold-chain logistics sector, custom inspectors, health professionals, employees at government agencies and in public service sectors, community workers, as well as people who are to go abroad.

Pang Xinghuo, deputy director of the Beijing centre for disease control and prevention, told a news briefing on Saturday that groups such as pregnant women, lactating women and patients with some diseases are not suitable for vaccines.

Those patients in acute stage of fever and infection, suffering from immune deficiency or immune disorder, having severe liver or kidney diseases, having uncontrolled hypertension, diabetic complications or malignant tumours not suitable for vaccines at this stage, he said.

Currently, people between 18 and 59 years are arranged to receive the vaccination, and those not in the age group should wait for further data of clinical trials to know whether they could be vaccinated, Pang added. PTI