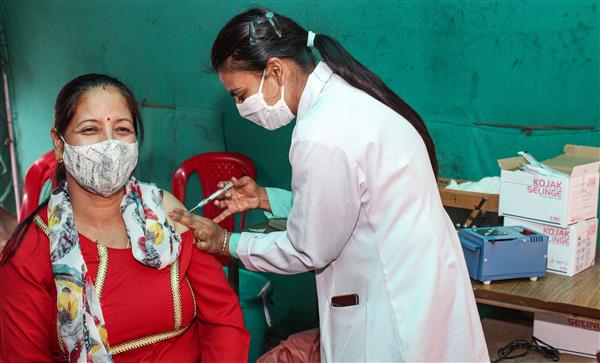 A health worker Administers a dose of Covid-19 vaccine to a beneficiary at District Hospital in Kullu on September 10, 2021. PTI photo

The Supreme Court on Monday stayed the orders of the Himachal Pradesh High Court constituting district level committees to monitor Covid-19 situation in the state, which recently became the first state to vaccinate 100 per cent of its 18 plus population with first dose and has vowed to vaccinate its entire adult population with the second dose by November end.

The top court stayed the orders of high court dated July 7 and 14 by which it had constituted district level committees comprising of deputy commissioner, secretary of district legal service authority and president of district bar association for monitoring Covid-19 situation, after the state government said that it is having demoralising effect on officials.

A bench of Justices DY Chandrachud and BV Nagarathna, which issued notice on the plea filed by the state government challenging the orders of the High Court, said that pendency of the plea will not preclude the high court from passing any order under Article 226 with regard to Covid-19 situation.

“When we had constituted a National Task Force on Covid-19, it comprised doctors and experts from across the country but this district level committee comprises people who are secretary, district legal service authority and President of District Bar Association. What are they expected to do,” the bench said.

At the outset, Additional Advocate General Abhinav Mukerji, appearing for the state government said, “We have recently achieved a rare distinction of becoming the first state to vaccinate 100 per cent of our adult population with first dose for Covid-19 and by November end; we will be able to vaccinate entire population with second dose. We have a positivity rate of 0.7 per cent only”.

He said that these committees are having a demoralising effect on the officials, who are working very hard to vaccinate the population as they have to appear before the court on every Wednesday, where many allegations are made against them.

Mukerji said that they had to face a difficult situation in a village called Malana in Kullu district, where people believe themselves to be the original descendants of Aryans and they do not like to be vaccinated.

“They were persuaded to take vaccines after much deliberation. This was the reason for the delay in achieving the target of 100 per cent otherwise we would have achieved much earlier,” Mukerji said.

Justice Chandrachud said, “I have been to that village. The villagers are famous for something else also”.

He said that what the High Court has done is already being done by the State.

The bench said that the committees which have been constituted by the High Court are not expert committees and prima facie the constitution of such committee requires consideration. — PTI