In ramping up testing, antigen test proves to be game changer in Haryana 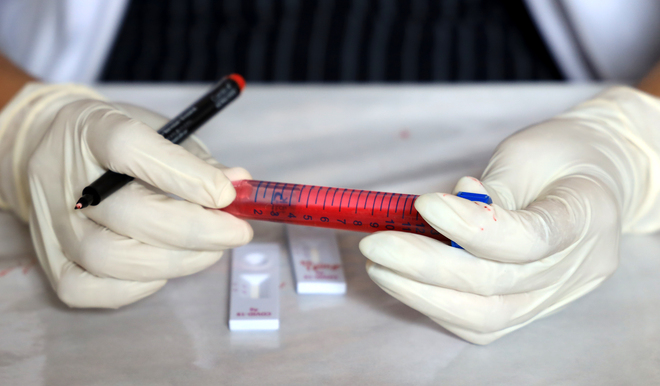 Introduced towards the first week of July, Rapid Antigen Tests (RAT) have proved a game changer in Haryana so far as ramping up testing is concerned, despite being considered unreliable initially.

Haryana had a testing rate of 9,955 per million and the total tests touched the 2.52-lakh mark when it decided to go for rapid antigen tests, particularly for the NCR districts which were witnessing a large majority of cases.

While from March till the beginning of July, the state had performed nearly 2.5 lakh tests, the total number of tests till Sunday has touched 12,94,598 while the tests per million in Haryana stand at 50,668.

Of these, 8,96,736 tests have been done through the RT-PCR technique while 3,91,108 samples have been tested by rapid antigen tests.

Though rapid antigen tests are now being used across the state now, Rohtak, Sonepat, Palwal, Nuh, Jhajjar, Rewari and Panipat are some other NCR districts where these kits have been used considerably.

This is despite the fact that rapid antigen tests are not considered as reliable as the RT-PCR tests, which is considered the gold standard test for detection of Covid-19.

The ICMR guidelines provide that in case a person tests negative with the rapid antigen tests, he or she has to be tested again by using RT-PCR if the person has symptoms.

While the sample positivity rate of RT-PCR is 6.7 per cent in Haryana, it is 4.2 per cent in case of rapid antigen tests.

Rajeev Arora, Additional Chief Secretary, Health and Family Welfare Department, said that the rapid antigen tests, which take a few minutes to give results, have helped the government test large numbers of people in clusters in the NCR districts and hence facilitate the opening up of industries and business.

Giving the recent example of detection of a large number of cases at ‘dhabas’ in Murthal (Sonepat), Arora said that it would not have been possible with the RT-PCR which takes a day or two for the results besides having a limited capacity.

“Antigen testing has helped us detect cases early in large clusters and isolate the patients early to prevent further spread of the virus,” he added.

The ACS further said that antigen testing has also helped the Health Department to continue with testing where its labs faced bottlenecks because of its staff testing positive, like the one in Panchkula.

He, however, said that the department has been maintaining a balance of 70:30 between RT-PCR and rapid antigen tests so that the maximum number of samples are tested by the former method, being more reliable.

“As far antigen test is concerned, a positive result is confirmed positive. It is only in case of a negative report, we have to test again by RT-PCR if the person has symptoms,” Arora added.