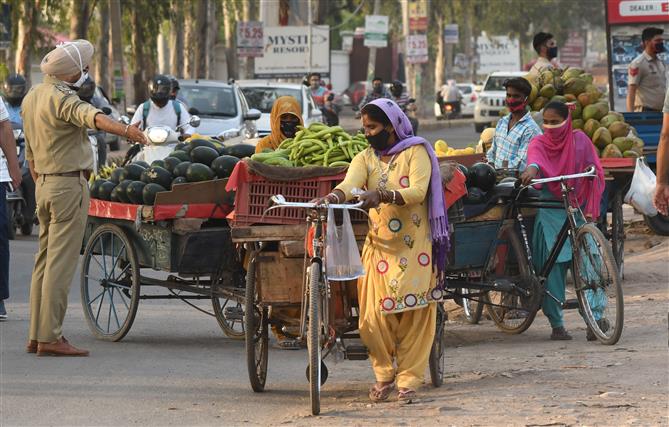 A cop tells fruit and vegetable vendors to leave as the lockdown comes into force at Dhakoli on Friday evening. PHOTO: RAVI KUMAR

The recovery rate in the district has declined from 86.11 per cent to 79.33 per cent in the same period, compounding the problem. The number of recoveries has gone up from 22,756 to 36,944 till today.

In March, the district had witnessed more than 27 per cent increase as 25,880 cases were reported till March 28 against 20,315 reported on February 28.

Civil Surgeon Dr Adarshpal Kaur said the sudden spurt in Covid cases in the district was due to enhanced testing. She said a new trend was seen this time as a large number youngsters were also getting infected. She said people aged above 45 should come forward to get themselves vaccinated, adding that vaccination for people above 18 years of age would be started in a couple of days after getting the vaccine stock.

Dera Bassi: The police have booked the owner of Hotel Paras in Dera Bassi for flouting curfew norms. The police said a party was being organised at the hotel in the afternoon in which around 100 persons were in attendance. The hotel owner was arrested and an FIR under Section 188 of the IPC was registered against him, they added. — TNS