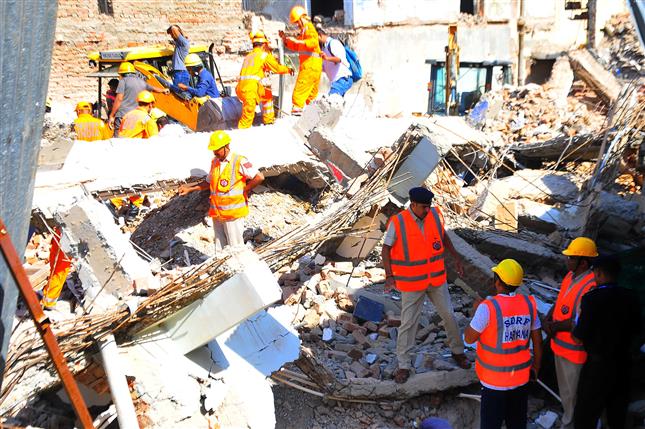 NDRF and SDRF teams during a rescue operation after a three-storey factory collapsed at Udyog Vihar, Phase I, in Gurugram on Monday. Tribune Photos: S Chandan

A three-storey factory collapsed while it was being demolished in Udyog Vihar Phase I here on Monday morning, leaving two labourers dead and as many injured, the police have said.

The deceased have been identified as Guddu (35) and Pratap (24). The injured persons are Ramakant (27) and Naresh (26). All four are natives of Fatehpur Chaurasi in Unnao district of Uttar Pradesh.

According to the district administration, six labourers were carrying out the demolition of the three-storey building and had been staying on the premises.

Deputy Commissioner Nishant Kumar Yadav, who visited the spot, said two labourers had gone out, while four were inside when the incident took place around 8 am in plot 257 of Udyog Vihar Phase I. The building was closed for six years and the demolition had started a month ago, the police have said.

Of the four workers trapped under the debris, three were cooking food.

“A five-member committee led by SDM Ravinder Yadav has been formed to investigate the matter,” said the DC.

According to the police, the two floors of the factory were already torn down and the incident took place when the roof of the first floor caved in and the entire building collapsed.

After getting the information, the police headed by DCP (West) Deepak Saharan, along with the civil defence and the fire brigade team, reached the spot and started the rescue operation.

“The bodies of the deceased have been sent to the mortuary and their families have been informed. One of the injured persons, Naresh, has been discharged after the first-aid treatment, while Ramakant is still being treated. He is out of danger,” said a senior police officer.

“One of the labourers died on the spot, while another succumbed in hospital. The reason for the collapse is being probed,” the DC said.

“A team of the Labour Department is collecting the details and compensation will be provided to the injured persons and the dependents of the deceased persons,” added DC Yadav.

The police are waiting for the families of the deceased.

“An FIR will be registered as per the statement of the families of the deceased persons,” said Inspector Anil Kumar, SHO, Udyog Vihar police station.