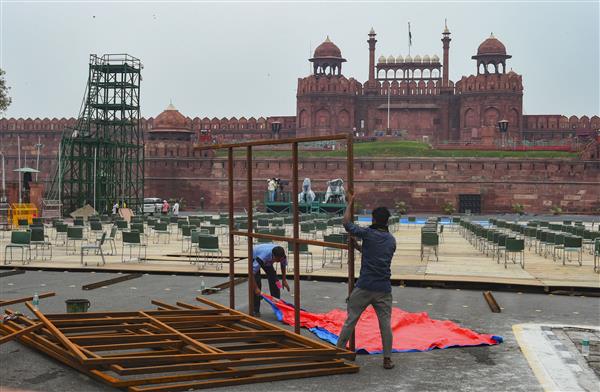 Preparations under way for the upcoming Independence Day celebrations, at Red Fort in New Delhi, on Sunday, August 9, 2020. PTI

In view of the COVID-19 pandemic, over 350 Delhi Police personnel who will be part of the guard of honour at Red Fort on Independence Day have been quarantined as a precautionary measure, officials said on Sunday.

These personnel of the force of all ranks—from a constable to Deputy Commissioner of Police—have been quarantined at a newly built police colony in Delhi Cantonment, they said.

Special Commissioner of Police (Armed Police) Robin Hibu, who is in charge of the arrangements, said the 350 personnel are doing well and none of them has any COVID-19 symptoms.

But they have been quarantined as a precautionary measure to ensure theirs as well as everyone else’s safety, he said.

“All personnel who are currently in quarantine at the police colony here for over a week now have been provided with all facilities and are strictly following social distancing norms.

“After their parade rehearsals, they immediately sanitise themselves. All precautions are being taken,” another senior police officer said.

He said usually least 40 police personnel are ferried in a vehicle to parade rehearsals.

But this year, owing to COVID-19, only 20 personnel are being ferried in a sanitised vehicle with strict adherence to social distancing norms, the official said.

More than 2,500 Delhi police personnel have been infected with COVID-19 so far. A majority of them already recovered and resumed their duties, according to the police.

Fourteen Delhi police personnel have died due to the viral infection. — PTI