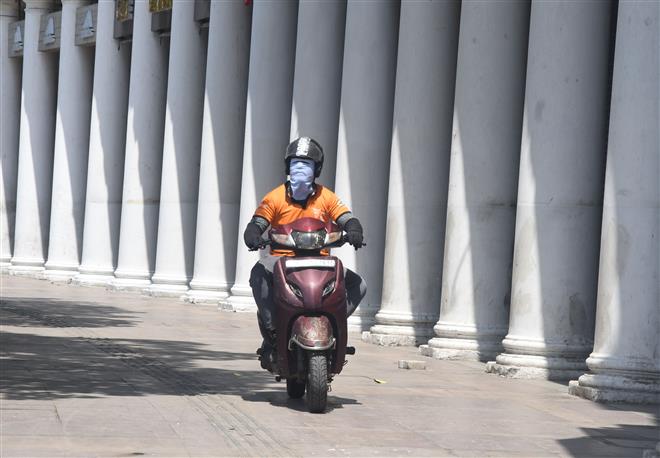 A rider rides on a deserted street at Connaught Place during weekend lockdown called in New Delhi on April 17, 2021. Tribune photo

Northern Railways said 50 coaches were kept ready to be used as isolation wards at Delhi’s Shakur Basti and 25 coaches at Anand Vihar, a development that comes hours at the request of the Delhi government as coronavirus cases spiral in the national capital.

Ashutosh Gangal, the general manager of Northern Railways, said the coaches at Shakur Basti could accommodate 800 people, and the ones at Anand Vihar could house another 500. He warned however that these coaches were only for people with mild affliction, and weren't equipped to deal with the more severe cases.

In addition, he said,  “Northern Railways has 463 COVID isolation coaches across its network”.

“They’re available on demand from states,” Gangal. “We won’t charge states for COVID isolation coaches. Health ministry guidelines have no provision for levying a fee.”

He said the coaches were equipped with two oxygen cylinders each. “The state government has to arrange for more whenever needed.”

In a letter to Railway Board chairman Suneet Sharma, Delhi Chief Secretary Vijay Kumar Dev said there has been a tremendous increase of COVID-19 cases in Delhi in the recent past, resulting in high number of serious cases requiring treatment in hospitals.

“In the GNCTD, as of now, the facilities at government and private hospitals available are getting strained and there is an urgent need for more number of COVID bed facilities to cope up with the ever increasing demand of COVID-19 patients who require admissions in hospitals,” he said.

“I therefore, request you to kindly arrange COVID bed facilities at the Anand Vihar and the Shakur Basti railway stations with full logistical support, requisite medical and paramedical staff and oxygen facilities etc. on an emergent basis,” Dev said. Further, it would be grateful if the railways identifies more such facilities “up to a level of 5,000 beds, as was done last year, so as to meet the huge demand of beds arising out of an ever-increasing surge in positive cases this time in NCT of Delhi,” he said in the letter dated April 17.

However, most of these coaches were not used and complaints were raised about the heat and mosquitoes inside them. — With PTI