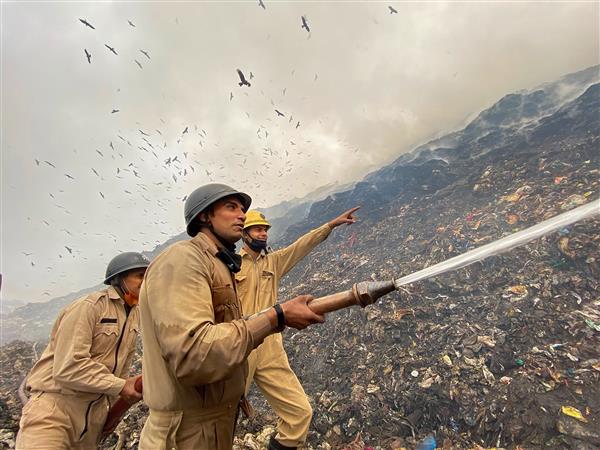 Fire fighters try to douse a fire that broke out at Ghazipur landfill site, in New Delhi, Wednesday. PTI

AAP leader Durgesh Pathak on Wednesday claimed that BJP leaders have set a fire in the Ghazipur landfill site to defame the Arvind Kejriwal government, a charge denied by the saffron party which said only AAP leaders can think of such allegations because they themselves might be doing such acts.

A fire broke out in east Delhi’s Ghazipur landfill on a day when Delhi’s air quality slipped into the severe category.

Pathak, in a statement, said due to the fire in the garbage mountain, people are choking. He said that BJP leaders are playing with the lives of Delhi residents by burning the mountain of garbage.

He also said that the AAP demands there should be a fair investigation into the fire at the landfill site and strict action should be taken against the culprits.

“I have come to know that the BJP people have set themselves on fire in this garbage mountain. The BJP is doing all this to defame the Delhi government,” he said.

“MP Gautam Gambhir and BJP leaders have been making false claims that they have reduced the height of this particular garbage mountain. Firstly they increased its width in the name of lowering the height. Secondly, he misled the people of Delhi by presenting a fabricated report of decreasing the landfill’s height. And now the BJP has set fire on the landfill which is causing breathing distress to the citizens in the time of COVID-19,” he said.

“Only AAP leaders can think of such allegations because they might be themselves doing such misacts. EDMC’s political leadership has been working hard to decrease the height of the garbage dump and the same has been showing results during the last one year,” he said.

As for last night’s fire, he said the blaze broke around 2.30 am and landfill site attendants immediately sought fire brigade’s help.

“The fire was controlled within two hours and machines were put in use to stagger garbage. The low pressure atmosphere of Delhi is the root cause of pollution choking the city and today’s fire can at best be a very minor addition,” Kapoor said.

It is sad that the AAP government has done nothing in the last six years to fight the main causes of environmental pollution and today are trying to shift blame over a minor fire in a landfill site, he added. — PTI