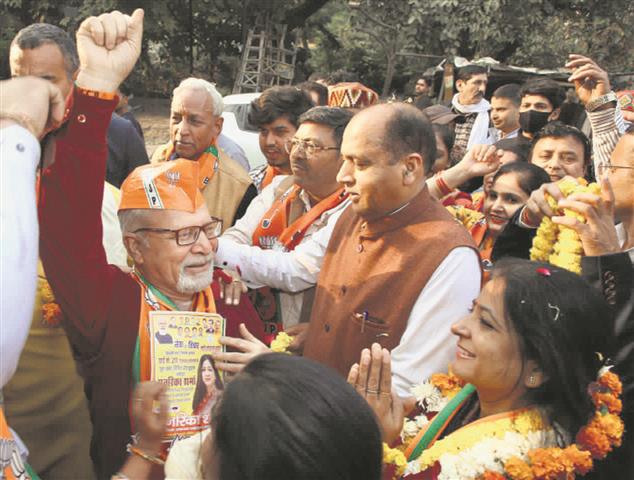 Himachal Pradesh CM Jai Ram Thakur campaigns for a BJP candidate ahead of the MCD elections in New Delhi on Tuesday. Tribune Photo

Himachal Chief Minister Jai Ram Thakur today said the Arvind Kejriwal-led Delhi Government had “crossed all limits of corruption” in the eight years of its rule and “betrayed the objectives” of the anti-corruption movement which gave birth to AAP.

Addressing three rallies in favour of BJP candidates for the upcoming MCD elections, Thakur said, “corruption has not only increased in Delhi but even in Punjab under the AAP rule. Even the drug industry is flourishing.”

Thakur, who exuded confidence of BJP victory in Himachal poll on December 8, said AAP tried to woo the voters of the hill state “but lost its breath while scaling the heights of Himachal”.

Thakur campaigned for Smarika Sharma Jha in Ward 217, Munish Dedha in Ward 193 and Renu Choudhry in Ward 197. Urging Delhi voters to elect BJP candidates, he said the party had been in power in the MCD for 15 years but since “AAP-led Delhi government didn’t let the BJP use Central funds meant for Delhi”.

“I am looking for Kejriwal’s schools. Arvind Kejriwal came to Himachal and said he had built many schools in Delhi. I have been in Delhi since morning, I have been covering wards but could not find any educational institution. I invite Kejriwalji to Himachal to review school infrastructure,” Thakur said.