According to the Delhi Police, a CISF team was examining the area outside National Media Centre around 10 am when they spotted a suspicious object 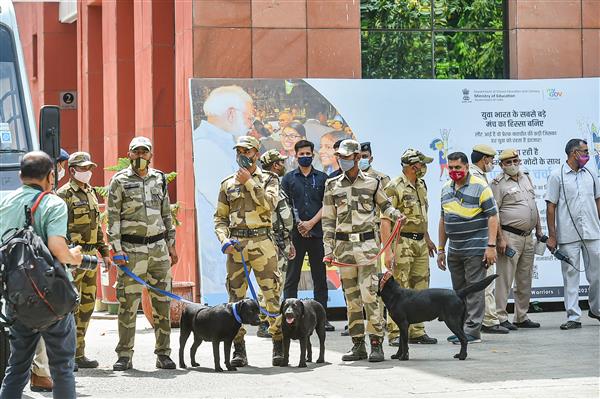 CISF dog squad outside the National Media Centre after a suspicious object was found, in New Delhi, Monday. PTI

The Central Industrial Security Force (CISF) and other agencies on Monday conducted a “dummy check” outside the National Media Centre here by placing a toy-shaped object to examine the response of security personnel to any bomb scare, officials said.

“It was a dummy check conducted by our government building security (GBS) unit to check the response of our teams to such threats,” CISF chief spokesperson DIG Anil Pandey said.

According to the Delhi Police, a CISF team was examining the area outside National Media Centre around 10 am when they spotted a suspicious object.

“They observed a toy-shaped item wrapped in a polythene. Immediately, the local police were informed. The bomb detection squad (BDS) team of CISF checked the item thoroughly and presence of any explosive was ruled out.

“The BDS of CISF and New Delhi district of police thoroughly searched the area for any other suspicious article in the vicinity. Nothing else was found,” a senior police officer said. PTI