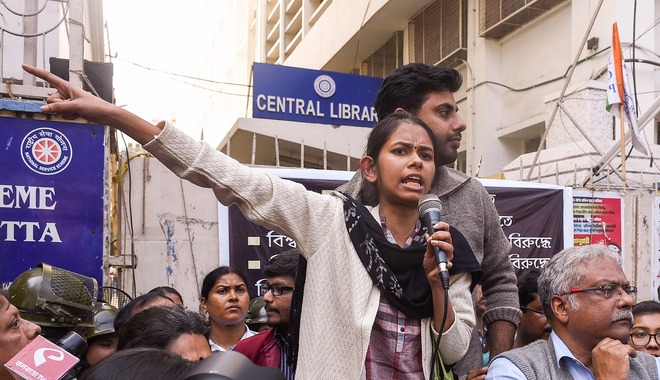 The Jawaharlal Nehru University (JNU) administration has issued a notice to students union president Aishe Ghosh and two others, asking them to immediately clear the blockade on a road inside the university's North Gate, failing which "strict action" will be taken against them.

The JNU students union has been on an indefinite sit-in at the university's gate since October 17, demanding time extension to research scholars for submission and a provision to conduct the end-semester examination for graduate and post-graduate students who couldn't attend their last semester due to the COVID-19 pandemic and subsequent lockdown.

The notice alleged that the "illegal occupation" of the space, the main road meant for vehicular and human movement, has been causing grave inconvenience to the residents, visitors and other commuters of the university.

Ghosh said that the JNUSU would "continue its protest and intensify its struggle".

She also slammed the JNU administration for serving the notice to JNUSU member Mohammed Danish who had been hospitalised after suffering from dengue.

"The office of the Chief Proctor has taken cognisance of the illegal occupation of the road immediately inside the University North Gate as reported by the JNU Security Department on 17/10/2020... Md. Danish along with a group of students, have blocked the road, erected a tent, and drawn electric connection from the control room of JNU security to the tent," read the notice issued to Danish.

The notice also alleged that the act was in clear violation of the Supreme Court judgement against the illegal occupation of public space and also flouts several clauses "governing the rules of the discipline and proper conduct of the schools of the University".

The Supreme Court, in its recent order passed on a batch of petitions against the anti-Citizenship Amendment Act protests in Delhi's Shaheen Bagh, has ruled that public places cannot be occupied indefinitely for protests, which must be carried out in designated areas alone.

In a Facebook post, Ghosh said, "See the shameless attitude of the JNU Administration. Comrade Danish is suffering from dengue, and due to deteriorating health, he has been admitted today to Safdargunj Hospital.

"The JNU administration did not even bother to care about a student but sent security to the hospital to serve notice to Comrade Danish while he is on hospital bed to withdraw the protest happening at North Gate,"

The varsity recently announced the reopening of campus in a phased manner from November 2, for the scholars requiring laboratory access and project staff members. PTI