Latching on to the remarks by BJP MP Manoj Tiwari, the deputy chief minister says his language ‘betrays the conspiracy being hatched to assassinate Kejriwal’ and he should be investigated 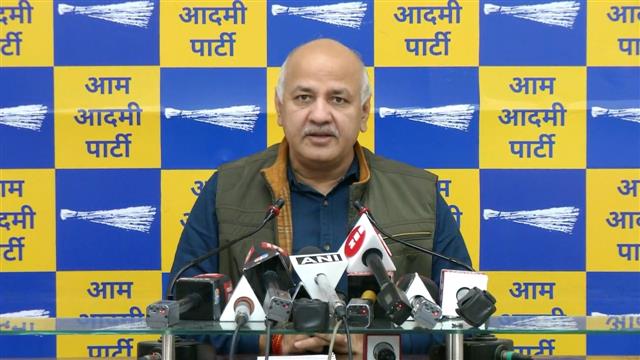 A video grab of Manish Sisodia addressing a press conference.

Latching on to the remarks by BJP MP Manoj Tiwari, the deputy chief minister said his language "betrays the conspiracy being hatched to assassinate Kejriwal" and he should be investigated.

The high-stakes MCD election, which will be held on December 4, is being seen as a three-way contest between the BJP, the Congress and the AAP.

Showing some old tweets by Sisodia claiming threat to Kejriwal's life, Tiwari at a press conference said, "He does this every year, claiming murder threat to Kejriwal. I don't understand what is going on as Kejriwal claims Sisodia will be arrested, and Sisodia prophecies that Kejriwal will be murdered."

Citing the death of AAP leader Sandip Bhardwaj, the North East BJP MP also alleged that it was not suicide but "murder". The top leadership of the AAP, including Kejriwal, were responsible for it, Tiwari said.

Fifty-five-year-old Bhardwaj was found hanging at his residence in west Delhi's Rajouri Garden on Thursday and the BJP had demanded a thorough investigation in the matter.

Bhardwaj was assured a ticket by the AAP for the MCD polls, but it was later sold to someone else, forcing him to end his life, Tiwari alleged.

The BJP leader reiterated that he was concerned about Kejriwal's security. On Thursday, Tiwari had triggered a row by saying that AAP's MLAs and party leaders were being thrashed by their supporters over selling of tickets for the municipal polls.

"I am concerned about Kejriwal's security because people and AAP volunteers are angry over sustained corruption, selling of tickets, friendship with rapist and massage in jail incidents. Their MLAs, too, have been thrashed. It should not happen with the chief minister of Delhi...," the MP had tweeted on Thursday.

Citing Tiwari's remarks, Sisodia told a press conference that his language "betrays the conspiracy being hatched to assassinate Kejriwal" and demanded the BJP MP's arrest.

There should be a probe to unravel the conspiracy to kill Kejriwal, said Sisodia, who on Thursday, too, had levelled the same allegations on the BJP and Tiwari.

"The AAP is not scared of such petty politics," he asserted and added, "BJP MP Tiwari should be arrested immediately and strict action taken against him since he has openly threatened to kill Kejriwal."

"He should be interrogated about this conspiracy to get information about the plot," the deputy chief minister said.

Kejriwal's politics is based on good governance and it has the trust of people, and the BJP is ready to "cross all limits" by conspiring to kill him, he said.

"The BJP has no faith in democracy and their open threat to kill Kejriwal shows the party can go to any extent for power," Sisodia said.

In the midst of the war of words between the BJP and the AAP, Delhi Lieutenant Governor VK Saxena, according to sources in his office, has directed the Delhi Police commissioner to keep a watch on related developments and ensure that any “eventuality, orchestrated or otherwise”, does not occur.

On Sisodia's allegations of "murder conspiracy", the BJP said AAP leaders were "totally frustrated" and alleged that "Kejriwal for political gains and public sympathy" could "plan" an attack on himself.

AAP chief spokesperson and MLA Saurabh Bhardwaj said a delegation would meet the Delhi State Election Commissioner to submit a complaint over the BJP "conspiracy" to "assassinate" Kejriwal.

There have been attacks on Kejriwal earlier also, even in the presence of Delhi Police personnel, he claimed at a press conference.

Later, the AAP filed a complaint with the State Election Commission against BJP MP Tiwari and other leaders over alleged death threats to Kejriwal.