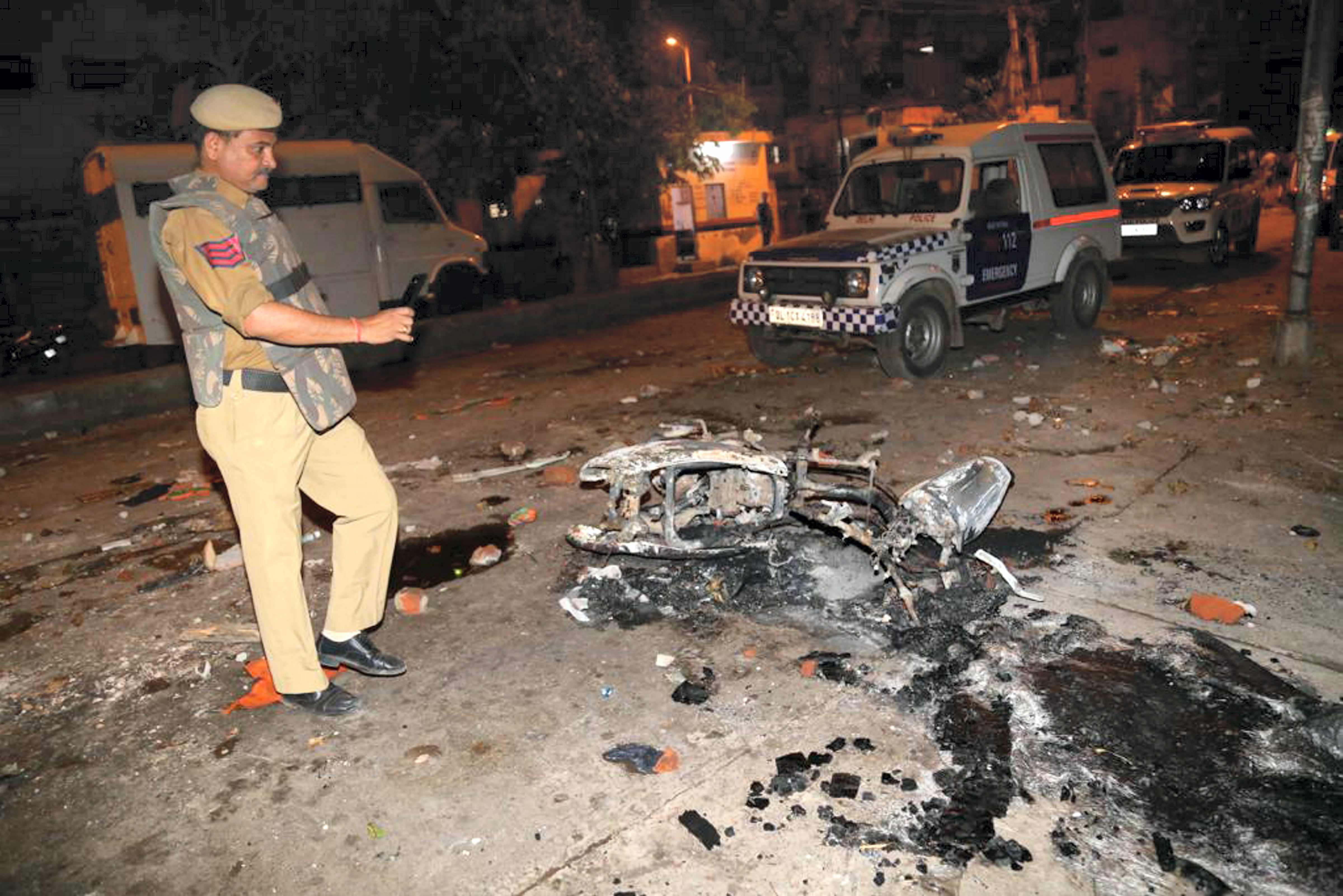 A policeman clicks pictures of a burnt-down scooter after violent clashes broke out during a Hanuman Jayanti procession at Jahangir Puri, in New Delhi, on Saturday, April 16, 2022. PTI

There was stone-pelting and some vehicles were also torched, police said.

Warning of strict action against rioters, Delhi Police Commissioner Rakesh Asthana said the situation is under control and adequate additional force has been deployed in Jahangirpuri and other sensitive areas.

Senior officers have been asked to remain in the field and closely supervise the law and order situation and undertake patrolling. Citizens are requested not to pay heed to rumours and fake news on social media, he tweeted.

"It was a traditional procession and was being escorted by police personnel. However, a clash between two communities erupted as the procession reached near Kushal cinema hall," a police officer said.

Police personnel who were present on the spot were injured as they tried to stop the violence, they said.

Union Home Minister Amit Shah also spoke to the Commissioner of Police and Special Commissioner (law and order) and directed them to take all necessary action following the violence, sources said.

The Delhi Police has also apprised the top functionaries of the Union Home Ministry.

The home ministry is keeping a close watch on the situation and gave necessary directions to the Delhi Police, the sources said.

Chief Minister Arvind Kejriwal said it is the Centre's responsibility to ensure peace is maintained in the national capital.

''I also appeal to the people to maintain peace and order," he told reporters.

Home Minister Amit Shah spoke to the Commissioner of Police and Special Commissioner (law and order) and directed them to take all necessary action following the Jahangirpuri violence, the sources added.

The force also apprised the top functionaries of the Union Home Ministry about the violence which took place during a procession on the occassion of Hanuman Jayanti.

The home ministry has given necessary directions to the Delhi Police and is keeping a close watch on the situation, the sources said.

They said additional forces were also deployed in other sensitive areas, besides those adjoining Jahangirpuri. PTI