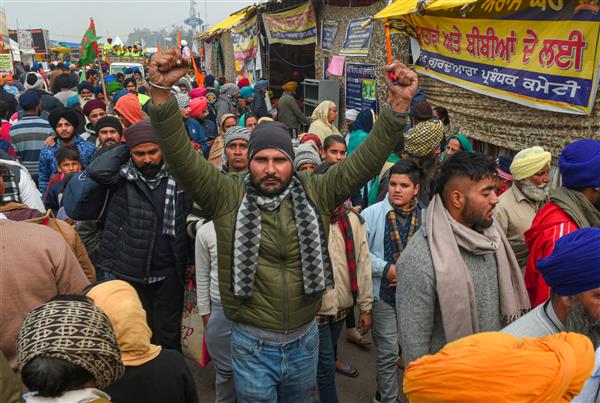 Farmers and their supporters during their ongoing protest against the new farm laws, at Singhu border in New Delhi, Saturday. PTI Photo

Despite their rock-hard determination to sustain the over 40-day-old agitation against the new farm laws, many protesting farmers at Delhi borders are falling prey to anxiety and depression, with a few having allegedly claimed their lives fighting this prolonged battle in biting cold.

Braving the elements and the odds stacked up against them, an overwhelming number of farmers have been protesting at Singhu Border and two other sites since November 26 but their “sedentary lifestyle” at present and “psychological sedimentation” is taking a toll on their physical and mental well-being.

According to NGOs running medical camps at the Singhu Border, the nerve centre of the massive agitation, these farmers are brave in their spirit but some have become vulnerable, facing extreme weather and may be a “sense of waning hope” that have translated into suicides at times.

However, to ease their psychological burden, US-based NGO United Sikhs has started carrying out counselling sessions for farmers at their camp set up on the Haryana side of the protest site at Singhu Border.

“So many farmers have died during this agitation, some of them claimed their own lives. While they may have a strong determination but the extreme cold and pent-up emotions, coupled with sedentary lifestyle at present as they are not going to fields, is making them psychologically vulnerable,” said Sanya Kataria, a clinical psychologist and a volunteer at the camp.

A student of Doctorate in Psychology at a private university in Noida, she has been offering services via the United Sikhs camp in the last few days.

“These farmers have been sitting for over 40 days on a national highway as part of this agitation. While most can withstand the physical rigour and biting cold as they are used to working hard, some of them have fallen prey to anxiety, depression and also hopelessness coupled with lack of self-esteem and feeling of frustration. It is a dangerous combination,” she told PTI.

So problems such as attention deficiency, restlessness, headaches were common symptoms being seen in those who have chosen to visit the camp for counselling, Kataria said.

In some cases, there is an emotional burnout from extreme stress and that is what “we attempt to detect early” through sessions, so that they won’t attempt or even contemplate taking any extreme step, she said.

Asked what kind of activities are done during a counselling session, the medical volunteer said the idea basically was to make them stop thinking about one “negative thought continuously”.

Besides, the techniques of diaphragmatic breathing or drawing breath from the nose and exhaling from nose itself, also proved useful, she said.

Gurdeep Kaur, assistant coordinator at the United Sikhs India office in Delhi, says the news of many farmers committing suicide at Singhu Border have “caused great distress to us”.

“We don’t want any farmer to die. We want to prevent any further suicide bids. So our counselling calms their minds. We also ask farmers to come for follow-up sessions,” she said.

Besides, there was a facility for physiotherapy at the camp, and general physicians and other doctors come too, “some as volunteers, other on a payment basis, by rotation”, Kaur added.

Bharatiya Kisan Union (BKU) national spokesman Rakesh Tikait had recently claimed that 47 farmers have sacrificed their lives during the protests.

A 75-year-old farmer protesting against the Centre’s new farm laws had allegedly hanged himself at the Uttar Pradesh-Delhi border in Ghazipur, earlier this month.

Medical Services Centre (MSC), a volunteer organisation based in Kolkata, has also been running a camp since the start of the protest late November.

Dr Nikhita Murali, a physician, who has been offering services for the past few days at the Singhu Border, said: “Many women who have joined the protest are having health issues too.”

“Sitting continuously or cooking for a long time in the kitchen is causing joint aches but many farmers are coming to us with problems of improper blood sugar level or blood pressure. Headache and body ache are also common ailments among them,” she said.

Asked what kind of problems women protesters are facing, Murali, a native of Kochi, said some were exhibiting gynaecological infections such as in the reproductive tract.

“These women belong to conservative families, so they don’t talk about their medical problems and feel uncomfortable talking to a male doctor about any gynaecological issues. After talking to me during consultation, they revealed that they have such problems,” the doctor said.

But none of them wanted to go back from the protest site, they wished to soldier on. Their will power was very strong, she added.

On Saturday, it was yet another day of protest for the farmers in the ritual January winter, even as the eighth round of talks between the farmer leaders and the Centre remained inconclusive on Friday.

Besides, many good Samaritans have also put up roadside stalls to offer free medicines and dental care services for the farmers, who are in no mood to relent or retreat. PTI