48 coronavirus deaths in the national capital 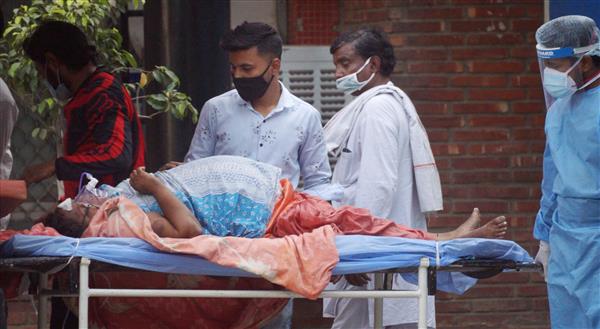 A COVID-19 patient being taken on a stretcher in a hospital, in New Delhi on Sunday. PTI file photo

Delhi recorded 10,774 fresh COVID-19 cases on Sunday, the highest single-day surge in the national capital till date, according to data shared by the health department.

According a bulletin issued by the department on Sunday, 48 new fatalities were also recorded, pushing the death toll to 11,283.

The fresh cases came out of the record over 1.14 lakh tests conducted the previous day, the bulletin said, adding that the positivity rate stood at 9.43 per cent.

Delhi recorded 7,897 COVID-19 cases on Saturday, while 39 more people died due to the coronavirus infection. The positivity rate had also mounted to 10.21 per cent, breaching the 10-per cent mark for the first time this year.

The positivity rate was above 15 per cent in mid-November last year.

On Friday, 8,521 COVID-19 cases and 39 deaths were recorded in the national capital. This was also the first time that more than 8,000 cases were recorded in a day this year amid a massive spike in cases over the last few weeks.

On Thursday, the city recorded 7,437 cases. It was also the first time that over 7,000 cases were reported in a day this year.

On the two preceding days, the number of cases stood above 5,000.

The total number cases stood at 7,25,197 on Sunday and over 6.79 lakh patients have recovered from the virus.

The number of people under home isolation increased to 17,093 from 15,266 on Saturday while the number of containment zones mounted to 5,705 from 5,236, the bulletin said.

Delhi Health Minister Satyendar Jain had warned on Wednesday that the new cases "could surpass" the previous single-day record registered in November, given the pace of the infection spread.

On Sunday, he held a meeting on COVID-19 preparedness. — PTI