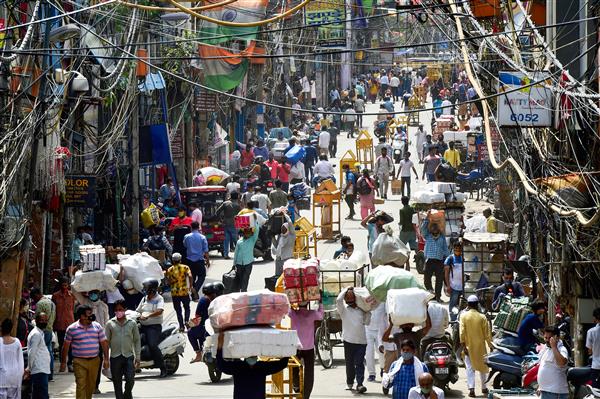 People crowd at Sadar Bazar as shops reopened after the unlocking process of Covid-19 lockdown began in a phased manner, in New Delhi on June 8, 2021. — PTI

Delhi recorded 238 new Covid-19 cases, the lowest in nearly three months, and 24 more deaths on Friday, while the positivity rate dipped to 0.31 per cent, according to data shared by the health department here.

As per the latest health bulletin, these new fatalities pushed the death toll from Covid-19 here to 24,772.

On Thursday, the city had recorded 305 new cases with a positivity rate of 0.41 per cent, and 45 deaths.

The infection rate, which had reached 36 per cent in the last week of April, has come down to below one per cent now.

Chief Minister Arvind Kejriwal on Saturday had said that the coronavirus situation was "quite under control" as he had announced certain relaxations in the lockdown in the city.

"Bringing back the economy on track is crucial as the situation of coronavirus is improving," he had said.

Delhi had been reeling under a brutal second wave of the pandemic, claiming a massive number of lives daily, with oxygen supply shortage issue at various hospitals, adding to the woes.

Since April 19, both daily cases and single-day deaths count had been spiralling up, with over 28,000 cases and 277 deaths recorded on April 20; rising to 306 fatalities on April 22.

On May 3, the city registered a record 448 deaths, as per the official data.

However, the number of cases have shown a downward trend and the positivity rate too has been shrinking in the last several days. The number of deaths per day has also been showing a decline in the last couple of days.

The number of cumulative cases on Friday stood at 14,30,671. Over 14 lakh patients have recovered from the infection, it said.

The number of active cases decreased to 3,922 on Friday from 4,212 a day before, as per the bulletin.

The number of people under home isolation dipped to 1,238 from 1,369 on Thursday while the number of containment zones dropped to 8,032 from 9,547 a day before, the bulletin said. — PTI