In his letter to the LG, Kejriwal writes that people of Delhi celebrate Chhath every year and the festival is an important part of Vedic Arya culture 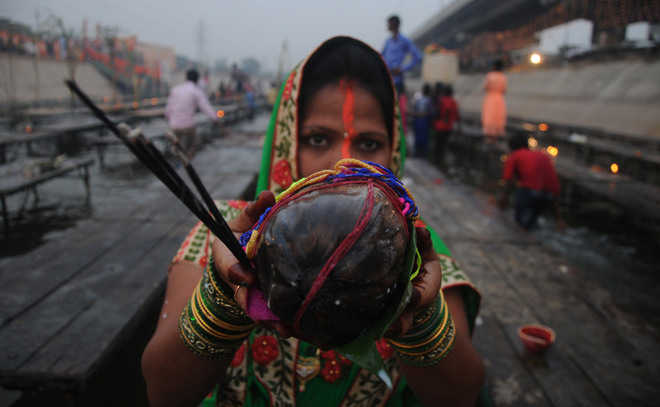 Delhi Chief Minister Arvind Kejriwal urged Lieutenant Governor (LG) Anil Baijal on Thursday to call a meeting of the DDMA as soon as possible to allow Chhath Puja celebrations as the COVID-19 situation in the national capital is under control.

The development comes amid a sharp attack on the Kejriwal government and protests by the Delhi BJP against the Chhath ban.

Earlier, Deputy Chief Minister Manish Sisodia had written to Union Health Minister Mansukh Mandaviya, urging for clarity over Chhath celebrations in view of Covid and issuance of guidelines to celebrate the festival.

In an order on September 30, the Delhi Disaster Management Authority (DDMA) prohibited Chhath celebrations at public places, including at riverbanks, waterbodies and temples, in view of the threat posed by COVID-19.

In his letter to the LG, Kejriwal said the Covid situation in Delhi has been under control for the last three months and he believes that the permission to celebrate Chhath should be given with suitable protocols in view of the pandemic.

“I have urged Hon’ble LG to allow Chhath pooja celebrations in Delhi. Corona is now in control and many other states have allowed it,” he wrote on Twitter while sharing his letter to Baijal on the platform.

Earlier, the chief minister had said Chhath celebrations were prohibited at public places in view of the health and safety of people amid the pandemic. He had also slammed the protests by the Bharatiya Janata Party (BJP) as “dirty politics” over a sensitive issue.

Delhi BJP MP Manoj Tiwari, who has started a “Chhath Rath Yatra” of the city’s Purvanchali-dominated areas against the Chhath ban, wrote to Kejriwal on Wednesday, accusing him of hurting the sentiments of Hindus.

He took a dig at the AAP leader over his letter to the LG seeking permission for Chhath celebrations, saying stubbornness yields to faith.

“Jai Chhathi Maiya...stubbornness yields to faith. Did you not remember the story that you narrated in the letter today while putting obstacles in the way of Chhath celebrations? Anyway, better late than never, let us celebrate Chhath together. All of us will celebrate Chhath at the ghats in a disciplined manner following the Covid norms,” Tiwari said in a tweet in Hindi.

In his letter to the LG, Kejriwal wrote that the people of Delhi celebrate Chhath every year and the festival is an important part of the Vedic Arya culture.

The Purvanchalis (Bhojpuri-speaking natives of eastern Uttar Pradesh and Bihar) living in Delhi are considered a prominent vote bank in the national capital and Chhath is one of their most important festivals.

“If the Chhath ban is not withdrawn in 48 hours, around 60 lakh Purvanchalis in Delhi will pledge to uproot the city government to save their pride,” Tiwari had said earlier.

Chhath, celebrated after Diwali, involves the offering of “Arghya” by fasting women to the Sun god in knee-deep water. Some experts believe that water could lead to the spread of the coronavirus infection when a large number of people celebrate Chhath. PTI