Manish Kumar, a sanitation worker, became the first person to receive the vaccine at AIIMS 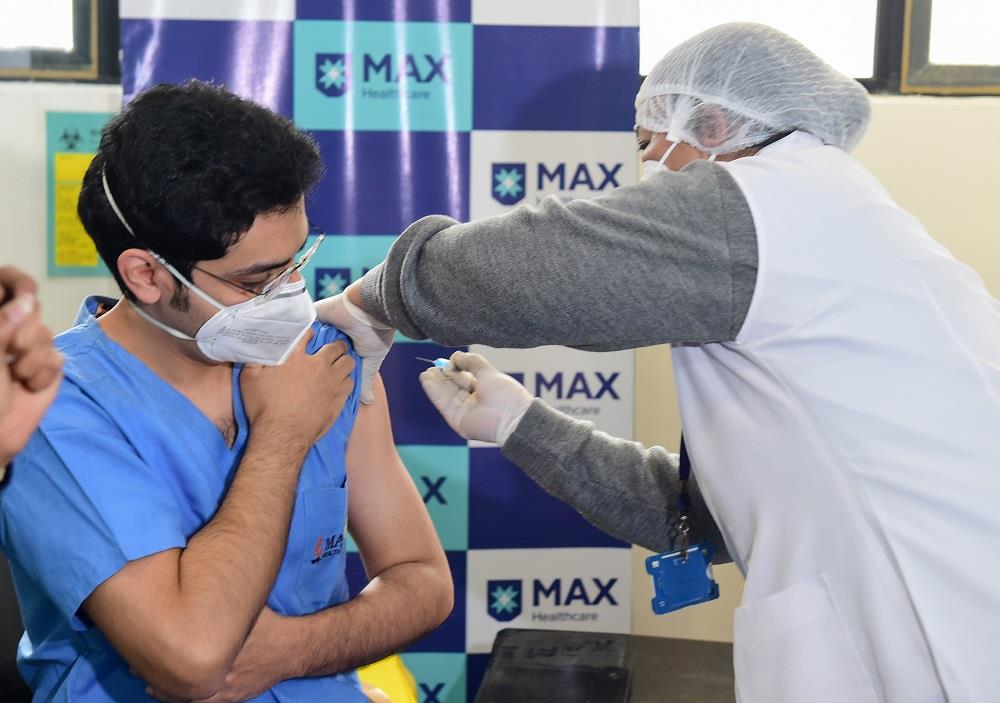 A nurse administers the COVID-19 vaccine to a frontline worker, after the virtual launch of COVID-19 vaccination drive by Prime Minister Narendra Modi, at Max Hospital in New Delhi, on Saturday. PTI Photo

The COVID-19 vaccination drive is under way in the national capital with health-care workers, who were at the forefront of the fight against the pandemic, getting the first shots amid cheers and applause.

Manish Kumar, a sanitation worker, became the first person to receive the vaccine at the All India Institute of Medical Sciences (AIIMS) here on Saturday.

At the Delhi government-run Lok Nayak Jai Prakash Narayan (LNJP) Hospital, 48-year-old nurse Biji Tomy, a native of Kerala, was the first person to get the shot.

“I am feeling very proud and humbled to be part of this historic moment. We risked our lives and were pained to see so many deaths every day. It is a relief that we have a vaccine against coronavirus now,” Tomy told PTI.

As she stepped out 30 minutes after being administered the vaccine, her colleagues greeted her with loud cheers and applause.

The hospital staff cheered other beneficiaries too.

In Delhi, every person will be kept under observation for 30 minutes after the immunisation to watch for any side-effects of the vaccine, according to authorities.

Central District Programme Officer Puneet Jaitley was the second person to get the shot at LNJP.

“It’s been 30 minutes since I was administered the vaccine and I feel absolutely fine,” he said.

Sandeep Nayar, head of Department of Respiratory Medicine at BLK Super Speciality Hospital, was the first one to get the shot at the facility.

India has granted emergency use authorisation to two vaccines — Oxford’s Covishield, manufactured by the Serum Institute in India, and Bharat Biotech’s Covaxin.

Earlier in the day, Prime Minister Narendra Modi launched India’s COVID-19 vaccination drive and asserted that the made-in-India vaccines being rolled out will ensure a “decisive victory” for the country over the coronavirus pandemic.

Delhi had recorded 295 fresh COVID-19 cases on Friday, the lowest in more than eight months, which took the city’s tally to 6,31,884. The death toll mounted to 10,732 with 10 new fatalities, according to official data.

Delhi Health Minister Satyendar Jain had said the positivity rate slipped to an “all-time low” of 0.44 per cent on Friday.

Delhi Chief Minister Arvind Kejriwal had on Thursday said the city government has received a total of 2.74 lakh doses of vaccines so far from the Centre which would be sufficient to cater to 1.2 lakh healthcare workers. PTI