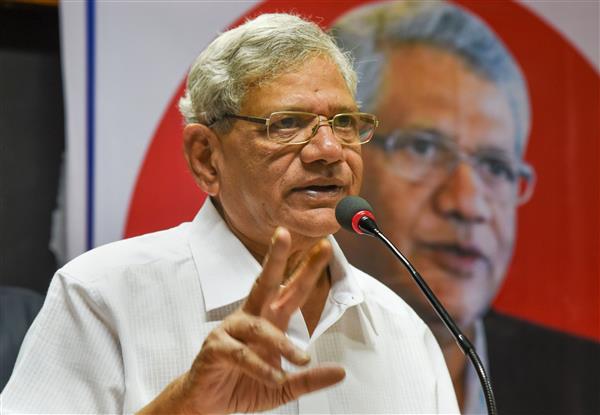 The CPI(M) on Sunday criticised the government over the reference to its leader Sitaram Yechury and some civil society members in a supplementary chargesheet filed by the Delhi Police which cites statements from some accused to say that they mobilised anti-CAA protestors.

“The CPI(M) condemns this obnoxious action by the Delhi Police to further the narrative of its political masters and urges the government to desist from such acts of criminalising peaceful political protests,” the Communist Party of India (Marxist) Politburo said in a statement.

The reaction came a day after it was reported that the names of CPI(M) general secretary Yechury, Swaraj Abhiyan leader Yogendra Yadav, economist Jayati Ghosh and Delhi University professor Apoorvanand figure in the supplementary chargesheet in the February riots cases, allegedly for “provoking and mobilising” anti-CAA protesters.

The Sunday statement by the Politburo said it was “shocked by the brazenness with which the Delhi Police, acting under Home Minister Amit Shah, has tried to implicate prominent political leadership, academics, cultural personalities and activists in connection with the horrific communal violence in North East Delhi in February”.

“No condemnation is strong enough for this act of crude partisanship and vengeance,” the statement said.

It also alleged that it was clear “the BJP-RSS has gone about portraying Delhi riots being a deep-rooted conspiracy” by anti-Citizenship Amendment Act (CAA) protesters.

“This is in line with the growing pattern of the most blatant abuse of the police and other central agencies like CBI, NIA, ED to frame prominent opponents and demonise them.

“The pattern includes slapping of provisions of draconian NSA, UAPA and Sedition Act to harass and incarcerate those who vigorously oppose such blatant misuse of powers by the government contrary to that as ordained by the Constitution,¨ it said.

The CPI (M) also demanded unconditional release of “political prisoners who are incarcerating in cases under trumped up charges”.

“The Politburo urges its units all over the country and appeals to all the parties, organisations and individuals who are committed to democracy and values of the Constitution, to protest this dastardly attack on democracy,” the statement said.

Delhi Police sources had on Saturday downplayed the entire matter, saying one of accused had disclosed these names in their disclosure statement.

The Delhi Police has not filed a chargesheet “against” them, the sources had said.