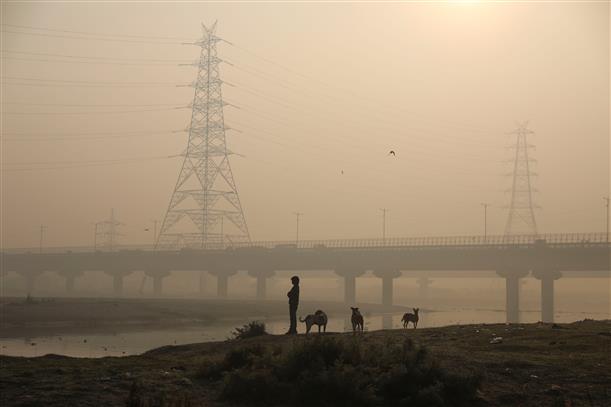 A man stands on the banks of the Yamuna river on a smoggy morning in New Delhi, India, on Friday. Reuters photo

The air quality in the national capital remained in the ‘very poor’ category on Friday with AQI in the evening being recorded at 381, data from the Central Pollution Control Board (CPCB) showed.

According to authorities, the air quality is likely to improve “significantly” from Sunday owing to relatively strong winds and reach “poor category”.

To combat pollution, the Delhi government on Wednesday had issued 10 directions, including a ban on the entry of trucks carrying non-essential items in the city and closure of schools and colleges till further orders.

On Thursday too, the AQI had stood in the ‘very poor’ category.

Delhi’s AQI had on Tuesday slipped into ‘severe’ category in the evening, and the rising pollution level had been a matter of concern for all authorities and health experts.

Meanwhile, the minimum temperature in the national capital was recorded at 10.9 degrees Celsius in the morning, one notch below the season’s average, India Meteorological Department (IMD) said.

The maximum temperature in the evening was recorded at 22.4 degrees Celsius, and a relative humidity of 69 per cent on Friday, it said.

On Thursday, the city had registered a low of 10.5 degrees Celsius. At 9.6 degrees Celsius, the national capital on Wednesday had recorded the lowest minimum temperature of the season so far. — PTI