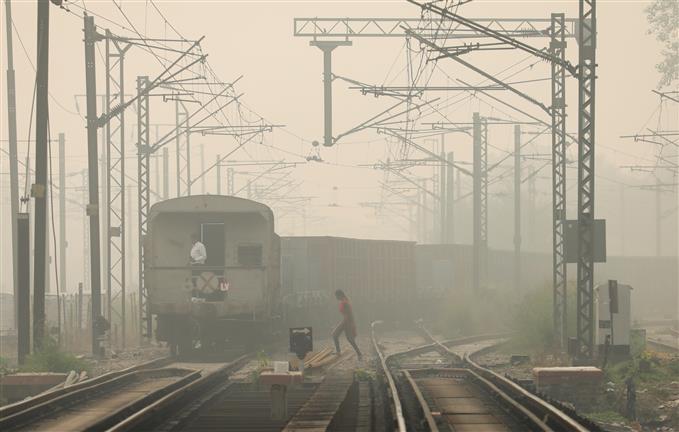 A woman crosses railway tracks as a goods train passes by, on a smoggy day in New Delhi. Reuters

The air quality in Delhi on Friday dropped to the “severe category”, a state it is expected to be in tomorrow as well due to increase in stubble related fire counts and transport level wind speed during the night.

“The AQI today is in severe category and is likely to be the same tomorrow due to increase in stubble related fire counts and increase in transport level (925 mb) wind speed during the night,” officials from the System of Air Quality and Weather Forecasting and Research (SAFAR) under the Ministry of Earth Science said.

The effective fire count increased to 4,056 and today’s share of crop residue burning is about 35 per cent in PM 2.5, they added.

The haze of toxic smog is due to a drop in temperature and wind speed and a spike in the burning of crop waste in surrounding farmlands, they said, adding that the stubble burning count continued to be in the range of 3,000 to 5,000. The drop in minimum temperature is likely for the next two days resulting in air quality to be in severe to upper end of very poor category.

“However, an increase in local surface wind speed helps disperse pollutants. Winds at transport level are likely to reduce from November 13 evening leading to less transport of pollutants from the upwind region to Delhi,” they added.

PM 2.5 are very small pollutants that have the capacity to enter the lungs and the bloodstream and cause severe respiratory diseases.

As La Nina makes an appearance for the second time in a row, meteorologists say many parts of the north can expect to see prolonged spells of pollution in the coming months.

This winter chill is likely to aggravate air pollution across the Indo-Gangetic Plain (IGP) which will be further aggravated by seasonal spikes like the delayed peak of stubble-burning season due to the extended monsoon.

However, stubble burning in adjoining farm lands is not the only contributor to Delhi’s dilapidating smog.

According to a study by the Centre for Science and Environment, vehicles contributed to more than 50 per cent of Delhi’s pollution between October 24 and November 8, this year, followed by household pollution (12.5%-13.5%), industries (9.9-13.7%) and construction activities (6.7-6.9%).

The other contributors, in descending order, are household pollution, industries, construction sector, solid waste, and road dust, it says.