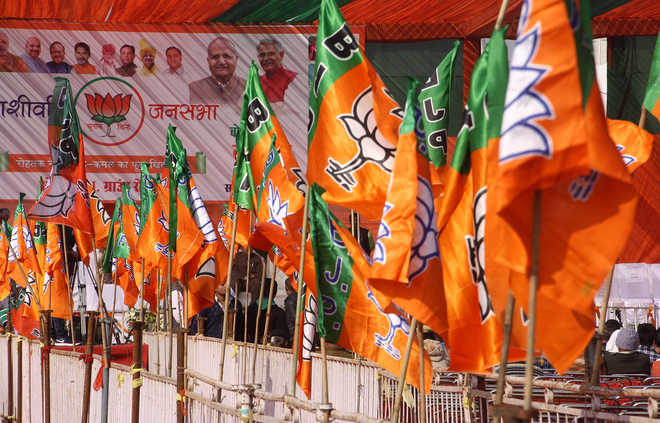 To ensure central government schemes reach the people, the Delhi BJP will open ‘NaMo Sewa Kendras’ in slum settlements of the city ahead of the civic polls later this year and is waiting for the current Covid wave to subside, party leaders said on Sunday.

“Our preparation to open these NaMo centres is complete. Hopefully, the cases of Covid will start declining in the coming week after which we plan to open the centres in the slum clusters of around 20-22 assembly constituencies that were part of our ‘Jhuggi Samman Yatra’ last year,” Delhi BJP president Adesh Gupta said.

The ‘Jhuggi Samman Yatra’ was launched by the Delhi BJP in October last year to reach out to slum dwellers in the city.

Delhi BJP secretary and in-charge of Jhuggi Jhopri (JJ) cell of the party Neeraj Tiwari said the ‘NaMo’ centres follow the principle of ‘Antyodaya’ under which the upliftment of the last person standing in a queue and belonging to any section of the society has been ensured.

“We have planned to open ‘NaMo Sewa Kendras’ in each of the 70 assembly constituencies for which all preparations have been made. Our focus will be on those constituencies where slum dwellers face basic problems like poor water supply, inflated electricity bills, and lack of sewer and sanitation,” Tiwari said.

There are an estimated 20 lakh people who live in the slum clusters of Delhi and most of them come from Uttar Pradesh, Bihar, Jharkhand, and Bengal, Tiwari said.

“Amid rapid urbanisation, these slum clusters exist at the lowest level of basic amenities like clean drinking water, sewerage and sanitation, health facilities among others. Each NaMo centre will act as a bridge to fill this gap and ensure people living there get all the benefits of the central government schemes,” Tiwari said.

Delhi has around 700 slum clusters where the BJP had not been successful in making inroads in the previous elections. The Aam Aadmi Party and previously Congress held sway among the voters of these pockets.

The BJP is pitted against a resurgent AAP riding on the popularity of the Arvind Kejriwal government’s free water and electricity schemes, in the contest for 272 municipal wards in three municipal corporations that are expected to go for polls in April.