Will roll out a massive membership drive on Sunday, says Gopal Rai 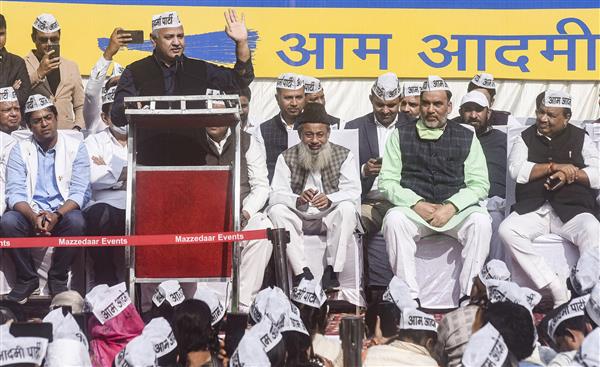 The Aam Aadmi Party on Saturday blew the bugle for the municipal polls in Delhi launching a massive ‘MCD Badlaav’ campaign to oust the BJP from power.

The campaign, which seeks to reach voters in every nook and corner of the national capital ahead of the civic polls early next year, was jointly launched by Delhi Deputy Chief Minister Manish Sisodia and Environment Minister Gopal Rai in the presence of AAP workers, MLAs, councillors and office-bearers at the party’s headquarters here.

Speaking on the occasion, Sisodia highlighted the work done by the Delhi government under Chief Minister Arvind Kejriwal so far in education, healthcare and other sectors, and exhorted the people to vote for the Aam Aadmi Party (AAP) in the upcoming elections to bring the party at the helm of affairs at the municipal corporations in Delhi.

“We have been carrying forward a political movement for the last nine years. The AAP is still not a party. It’s a movement. There is some motive and dreams behind this movement. We have to change the political discourse in the country and give it a direction,” Sisodia said while addressing the gathering at the party headquarters.

He said the AAP has “managed to bring some change” in country’s political discourse since it formed its government in Delhi in 2015 “as people of the country today talk about Kejriwal dispensation’s model of governance” and work done to improve quality of education, provide better healthcare services and ensure safety of women in the national capital.

“All new and old political parties, from Kanyakumari to Kashmir, are now trying to follow the AAP’s way of functioning,” he said, giving its credit to the people of Delhi and his party workers.

He exhorted his party workers to start working with “a dream” to ensure the victory of AAP in the upcoming civic polls “to free Delhi from garbage and dirt spread all across the city”.

“Every lane of Delhi is dirty with garbage under the BJP regime,” he alleged.

Speaking on the occasion, Rai targeted the ruling BJP on the issue of alleged corruption in civic bodies and said the saffron party has given two gifts to the people of Delhi during its 15 years regime—“three garbage mountains and extortion in every lane” of the city.

“For bringing change in Delhi municipal corporations, a ‘maha abhiyan’ (massive campaign) is starting from today to oust the corrupt BJP from power. The BJP broke all records of corruption while ruling the Delhi civic bodies. We will make them break all records of forfeiting of the deposits of their candidates in the election,” he said.

As part of the ‘MCD Badlaav’ campaign, a massive membership drive will be rolled out on Sunday, he said and asked his party leaders and workers to ensure its success.

“We have to reach every lane of this city and tell people that the way you gave leadership to Arvind Kejriwal (in assembly polls) to end corruption in Delhi government, do it again as time has come to bring change in the municipal corporations as well to keep Delhi clean and make it the world’s best city. There is garbage all around,” Rai, who is convenor of the AAP’s Delhi unit, said.

He also gave his party leaders and workers target of making at least 50 lakh people members of the party under the ‘MCD Badlaav’ campaign.

“The membership drive is beginning tomorrow to reach every one. Those (party leaders and workers) who won’t work in their respective areas will be counted in negative. You must keep in mind that big brother is watching. Just by making attendance and sharing picture on Facebook and WhatsApp will not help,” Sisodia said.

He said the AAP was not formed, “unlike the BJP and Congress”, to give a platform to “career politicians” to join the party and contest elections for power. “It was formed to spearhead a movement to bring change in the country’s politics and take the nation on the path of progress”.

“We have challenges in front of us today. On the one hand, we have corrupt and communal forces weakening this country while one the other, there is need to give vision to this country and solve the problems like lack of quality education, good healthcare services, unemployment. We have to achieve our goals,” he said.

Sisodia said the budget of Delhi government has doubled from Rs 30,000 crore in five years because of the AAP’s “politics of honesty” and lashed out at the the BJP’s Delhi unit for protesting against the new excise policy of the Arvind Kejriwal dispensation.

“Due to Delhi government’s excise policy, all the shops of people, who were selling illegal liquor in the city and stealing Rs 3,000 crore (every year) under the protection of the BJP, are now closed. The BJP people used to run illegal ‘Thekas’ (liquor shops). They are making hue and cry over the (new) excise policy because the money, which used to go into the pockets of the politicians and their goons earlier, is now coming to the government’s kitty,” he charged. PTI