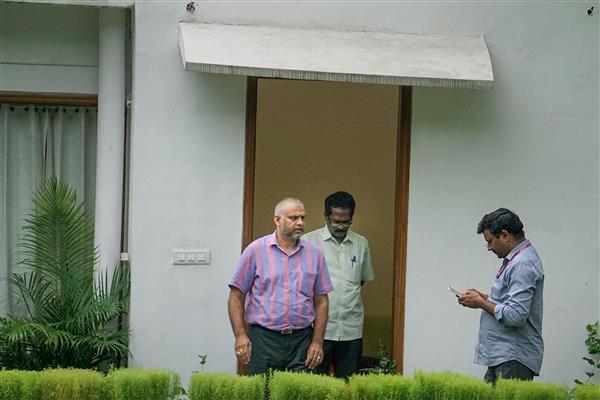 ED officials outside the residence of MP MS Reddy during a raid as part of a money laundering investigation into alleged irregularities in the now-scrapped Delhi Excise Policy 2021-22, in New Delhi, on Friday. PTI Photo

The Enforcement Directorate(ED) on Friday conducted fresh raids at about 40 locations across the country including at the Delhi residence of a YSRCP MP as part of its money laundering probe into alleged irregularities in the now scrapped Delhi Excise Policy, official sources said.

Sources said the searches were conducted at premises linked to liquor businessmen, distributors and supply chain networks in Nellore and some other cities in Andhra Pradesh, Telangana, Karnataka, Tamil Nadu, and the Delhi-National Capital Region (NCR).

Sources said the premises included the Delhi residence of M Sreenivasulu Reddy, the YSRCP Lok Sabha MP from Ongole in AP. Reddy, who is allegedly linked to liquor distributorship business, could not be contacted by PTI for a reaction despite repeated attempts.

Delhi Chief Minister Arvind Kejriwal said he has failed to understand what the liquor scam was about, and advised the Centre to do positive things for progress of the country instead of "harassing" everyone with the Central Bureau of Investigation(CBI) and the Enforcement Directorate(ED).

He said the Centre is free to catch anyone if some wrong is done, but the progress of the country is hampered if it "unnecessarily" uses the CBI and ED to "scare and threaten" everyone.

"If the Centre does not do any positive work and keep troubling and scaring everyone with CBI and ED, how will the country progress?" he asked at a news conference.

The AAP has refuted allegations of irregularities and corruption in the implementation of the 2021-22 Excise Policy.

Officials of the agency recorded Jain's statement according to the provisions of the Prevention of Money Laundering Act (PMLA).

The ED had moved a local court seeking its permission for the questioning. The court authorised the probe agency to carry out questioning on September 16, 22 and 23.

The ED raids commenced early morning with agency teams being escorted by police and paramilitary personnel at the locations searched by them. The raids were underway late this evening.

This is the second round of raids by the ED in the money laundering case after it first conducted searches on September 6 at about 40 locations across the country including that of some Punjab government excise department officers.

Chief Minister Kejriwal advised the Centre to talk about positive things like schools, and claimed 95 per cent press conferences of his government were about such positive things.

The policy implemented from November 17, 2021 was scrapped by  the Kejriwal government in July this year following a CBI probe recommended by Delhi LG V K Saxena into its implementation.

The money laundering case stems from a CBI FIR in which Delhi Deputy Chief Minister Manish Sisodia and some Delhi government bureaucrats have been named as accused.

The CBI had conducted raids in the case on August 19, covering the Delhi residences of Sisodia, IAS officer and former Delhi excise commissioner Arava Gopi Krishna, and 19 other locations across seven states and Union Territories.

The ED is probing if alleged irregularities had taken place in the formulation and execution of the Delhi Excise Policy and if some alleged "proceeds of crime," in terms of tainted money, was generated by the accused.