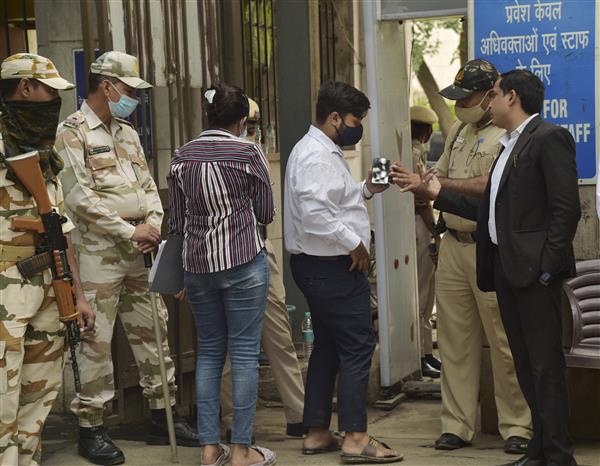 Gangster Jitender Mann alias Gogi, who was shot dead inside the Rohini courtroom here by two assailants, was cremated on Sunday at his village in outer Delhi’s Alipur area amid heavy security, officials said.

Gogi’s post-mortem was conducted on Sunday at the Maulana Azad Medical College here. The autopsy report is awaited, they said.

Gogi was shot dead inside a Rohini courtroom on Friday by two assailants who were also killed in police retaliatory fire.

According to the officials, adequate police personnel had been deployed at Gogi’s village since Friday after he was killed.

The body was brought to the village amid heavy police presence and adequate personnel were deployed at his village. Gogi’s elder brother Ravinder lit the pyre, officials said.

A senior police officer said, “Cremation was done by his (Gogi) family members amid heavy police presence and a company of CRPF was also deployed to prevent any untoward incident.”

Security arrangements will continue to remain in Alipur area. The situation will be reviewed again on Monday, police said.

“We have police dominance in the entire Alipur area as of now. But we will review the situation on Monday and will proceed accordingly,” he said.

The post-mortem of Rahul and Jagdeep—the two assailants who killed Gogi—will be conducted on Monday, most likely in the same hospital, police said.

A turf war broke out inside a crowded Rohini courtroom Friday between two rival gangs in which Gogi and his two assailants posing as lawyers were killed in the dramatic shootout that also saw police fire bullets in retaliation, officials said.

Video footage of the incident, which exposed security lapses in the system, showed policemen and lawyers rushing out in panic as gunshots rang out inside courtroom number 207.

The two gunmen dressed as lawyers were suspected to be members of rival Tillu gang. —PTI