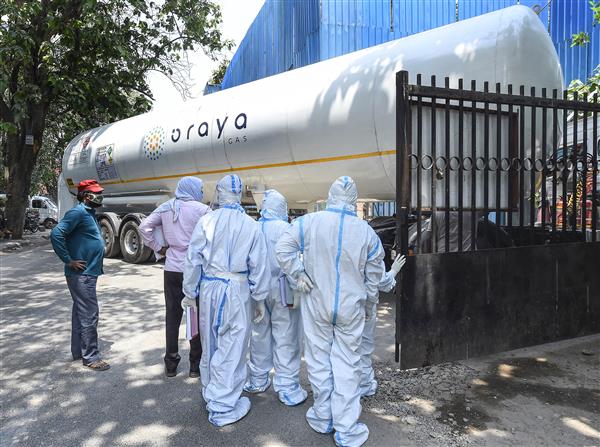 An oxygen tanker is used to refill medical oxygen at the LNJP Hospital, amid shortage of the gas due to rise in coronavirus cases, in New Delhi. PTI

Delhi got 730 tonnes of oxygen on May 5, the highest so far, which led to a significant reduction in SOS calls from hospitals, AAP MLA Raghav Chadha said on Thursday.

He, however, said of the 730 tonnes of oxygen, around 250 tonnes “did not come from our regular sources”.

“It came from an ad-hoc arrangement. I appeal to the Central government to turn this into a permanent one,” Chadha, who is also the Delhi Jal Board vice-chairman, said presenting the daily oxygen bulletin.

The supply of 730 MT of oxygen led to a considerable reduction in SOS calls from hospitals, he acknowledged.

“We received just 16 SOS calls on Wednesday against 40 to 50 calls we had been receiving earlier,” Chadha said.

The AAP MLA, who has been leading efforts to battle oxygen shortage in Delhi hospitals, said, “We need 976 tonnes of oxygen every day. I appeal to the Central government with folded hands to provide 730 tonnes daily.” PTI