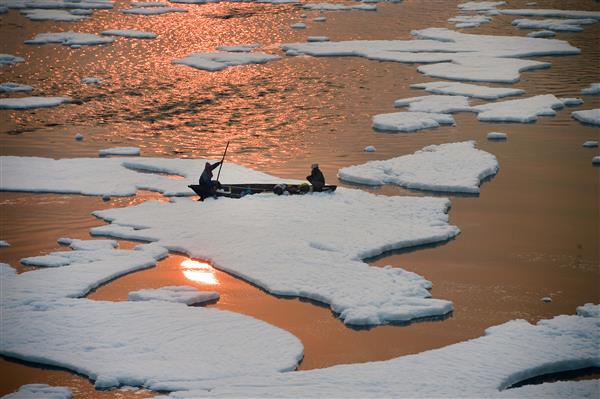 Fishermen row their boat on the polluted Yamuna river, as a thick layer of smog engulfs the atmosphere during sunrise at Kalindi Kunj in New Delhi. PTI

A day after the Delhi government deployed 15 boats in the polluted Yamuna river to remove toxic froth at Kalindi Kunj banks, where people were gathering for Chhath puja despite restrictions, bamboo structures were installed and water sprayed from tankers on Wednesday to dissipate the foam.

As the administration faced flak for these ‘cover-up’ measures, officials admitted that the problem of frothing—a sign of the river’s hazardous water quality—will continue unless sewage treatment plants and common effluent treatment plants in Delhi are upgraded to meet the new standards and all unauthorised colonies are connected to the sewer network.

A Delhi Jal Board official said directions have been issued to sprinkle water to dissipate the froth as “no other short-term measure would work”.

An official of the Irrigation and Flood Control Department said bamboo nets have been installed on the stretch at Kalindi Kunj to capture the froth.

These exercises will continue till effective action is ensured, the officials said.

Workers at the site said the bamboo structures will be taken down after the Chhath Puja is over.

The pollution in the Yamuna in Delhi is once again in focus as Chhath festivities are underway.

Early on Wednesday, a number of devotees had gathered at the Yamuna Ghat in Kalindi Kunj, downstream of the Okhla Barrage, but were dispersed by the police.

The city government has set up 800 makeshift ghats across Delhi for devotees to perform Chhath rituals.

The four-day-long festival of Chhath Puja is mainly celebrated by ‘Purvanchalis’ from Bihar, eastern Uttar Pradesh and Jharkhand settled in Delhi.

During the festival, the devotees perform elaborate rituals by offering ‘Arghya’ to the sun and observing fast.

The Delhi Disaster Management Authority had earlier banned Chhath Puja celebrations on the banks of the Yamuna in view of the pandemic.

“Boats, bamboo structures and water sprinkling won’t help. The froth will come back the minute you remove it. This is an eyewash so that the media doesn’t criticise the government over the pollution,” he said.

Facing criticism after foam was found floating on the Yamuna indicating a high pollution level, the Delhi government had on Tuesday deployed 15 boats to remove the same.

The Delhi Pollution Control Committee (DPCC) conceived the plan and implemented it with the help of the Irrigation and Flood Control Department and Revenue Department, officials said.

They said the idea entailed the deployment of boats parallel to each other in order to remove the froth using ropes.

An official, however, termed it a “temporary” measure. “The problem will persist till STPs and CETPs in Delhi are upgraded to meet the new standards. There is no immediate solution to it.”

“The foam is just the manifestation of the water quality of the Yamuna and it is a long-term issue,” he said.

According to experts, the primary reason behind the formation of foam in the Yamuna is high phosphate content in detergents used in dyeing industries, dhobi ghats and households in Delhi, Haryana and Uttar Pradesh.

The poor quality of effluents discharged from CETPs and Sewage Treatment Plants STPs is another reason.

Wastewater from authorised colonies and settlements containing high phosphate content reach the river through untapped drains. When water falls from a height at a barrage, the turbulence agitates the phosphoric compounds in the river which leads to the formation of froth.

Frothing in certain stretches of the river, such as near ITO and Okhla Barrage, has become an annual phenomenon in winters when the temperatures are low and flow in the river is less.

On Monday, pictures and videos showing devotees offering prayers in the Yamuna on the occasion of Chhath Puja with froth on the river surface had triggered a political slugfest between the ruling AAP and the BJP in Delhi.

While the BJP leaders alleged that the AAP government did not allow Chhath celebrations on the Yamuna banks to hide the “pathetic” state of the river, AAP’s Gopal Rai and Raghav Chadha blamed the governments in Uttar Pradesh and Haryana for the frothing in the river. —PTI